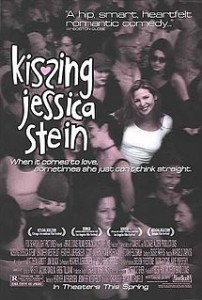 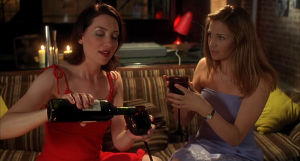 A funny, light, and quirky romantic comedy about a girl on girl relationship and all the complications involved.

Kissing Jessica Stein is a cute movie, it’s about an awkward, but smart woman who decides she’s had it with trying to date men and finding herself sitting across the table from a bunch of weirdos. instead, she tries dating a woman. the movie is about this relationship, and all of the problems that go with it. for example, Jessica is very uncomfortable with the whole thing and doesn’t know what to do in a variety of situations. she is also afraid of having anyone find out about her lesbian relationship, and so she hides it from both friends and family. i like that we follow both women in this movie, and not just Jessica. the humor is strong, and even though things do get a little simplistic by the end, it’s still a good movie.

Kissing Jessica Stein is a funny movie. that is one hundred percent due to actress jennifer westfeldt, who wrote the movie and really made it her own, much like kristin wiig did for bridesmaids about a decade later. westfeldt plays Jessica stein, a neurotic jewish new yorker who works hard and doesn’t really have much time for romance. that doesn’t really stop her from going out on dates, however, just from finding any potential with the men who take her out.

of course the movie does go down the usual road of showing us all of the terrible men that stein dates and how ridiculous they are. we’ve seen this sort of thing before, but it’s still fun. one guy wants to split the bill with her after dinner, but then wants her to pay more than him since she ordered something extra. he then follows that up by asking her to be his girlfriend. we’ve seen the bad date montage before in many movies. what makes this film interesting is that we learn, shortly afterwards, that maybe the problem isn’t with the men. but maybe it is with Jessica.

she works for a newspaper, alongside her good friend, joan, and her ex-boyfriend, meyers. this guy has been a friend of the family for ages, and really he was one of her brother’s friends back in college. he dated Jessica briefly and it didn’t work out. now the two of them call each other by last names and jokingly give each other a hard time around the office.

Jessica’s brother is getting married soon, and that seems to be the final straw that makes her really want to meet someone fast. maybe that’s why she suddenly starts going out on all of these dates. it’s at dinner one night with all of her closest coworkers and their spouses going out together, that Jessica turns off the guy who has come out as a blind date for her (westfeldt’s real life long term boyfriend, jon hamm).

As if it wasn’t bad enough learning that this man, who was supposedly her blind date, and definitely seemed promising, isn’t really single at all, Jessica gets hit with another punch. meyers lets her have it in front of everyone, calling her out on complaining about why she can never meet a nice guy. he makes her realize that maybe it’s her, pushing guys away from practically the moment she meets them. it’s a brutal scene, and a powerful one, filled with uncomfortable moments.

Jessica comes away from the scene wanting to try dating a woman. now, this whole time that we’ve been following the Jessica story, we’ve also been following the story of a young, female art gallery employee. this is helen, and she has the idea that she wants to try dating a girl and puts an add in a paper about it. her gay friends have a problem with her being so casual about this, saying she just wants to try it, as if it is a playful choice. helen doesn’t really care.

helen goes through with the ad and Jessica sees it and responds. she goes to a coffee shop to meet helen and from this point on, Jessica is more awkward then ever. even at the coffee shop, she sees helen, gets cold feet and tries to run out the door, making a quick getaway. that’s when helen notices her and stops her. the girls decide to have a drink together and talk and it turns out they have a lot in common. soon they are full on dating.

the plot has a lot of fun scenes that follow. there is the first makeout scene between the girls, for example, with Jessica stopping to ask helen if they are going to be using tongue first. there are also all of the scenes of Jessica trying to hide who she is dating from her coworkers and who helen is from her family. she brings helen to a family dinner, but pretends that she is just a friend.

things get pretty interesting as the pieces unravel in the second half and things come out. helen has a problem with the way Jessica tries to hide their relationship from everyone. Jessica isn’t sure if she is really a lesbian, or if helen is more of a friend who she really likes hanging out with. there are a couple of possible endings this movie flirts with, and how the story will end up putting them in the places they need to be by the movies finish. for example, the girls have a fight and separate, but will they get back together? and then there’s the idea of the circular ending, where a character ends up back where she started, and whether or not this movie will hit that point too. all of these possibilities are addressed.

the movie is good because it is funny. the plot isn’t anything especially unique, because it really amounts to just another usual romantic comedy, only this time with two girls instead of a girl and a guy. but the Jessica stein character is a lot of fun, and is really developed as the kind of person you might know, filled with jewish neuroticism. i like that her jewish heritage is made into a fairly big part of this film, embracing it, instead of just mentioning it, but never making it a part of the story. Kissing Jessica Stein isn’t anything brilliant, but it is definitely enjoyable and light-hearted fun. actrss jennifer westcott is one hundred percent the reason for that, not only writing the screenplay, but knowing exactly how to handle her character to get the most humor out of the role.