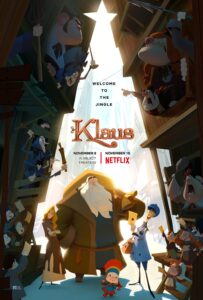 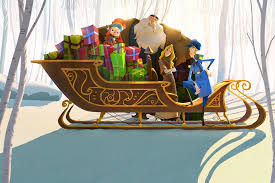 A truly fresh take on Santa Claus, Christmas, and how it all came to be, this one is lively, clever, and a whole lot of fun.

This is a movie that takes the concept of Christmas and Santa Claus and reworks a whole creative story about how those things came to be. The movie is about a postman and a town where different clans of people are warring with each other and have been this way for generations. It is the postman’s job to set up a working post office and deliver tons of mail, in order to get to leave this town and go back home. This becomes quite a challenge until he discovers a toy maker and a way to get kids to write the toy maker letters. It all works out in cute and comical ways that helps explain why Santa goes down the chimney, why there’s a naughty and nice list, and how Santa ended up with flying reindeer. But what we also get is the story of this town and how it transforms over time. This is a very smart and enjoyable movie that tried to do something different and largely succeeds.

Klaus is a surprisingly fantastic movie. It’s surprising because these days, Christmas movies that deal with Santa Claus  all tend to follow the same basic beats. From Elf to The Santa Claus to the Christmas Chronicles, they generally tend to be about people not believing in Santa and Christmas spirit being down, and that causing problems for Saint Nick and his spirit powered sled. They also tend to feature a climax that is Christmas Eve and Santa’s big night of delivering presents. Even The Nightmare Before Christmas featured that. Well, Klaus, the animated Netflix movie about how Christmas as we know it came to be, is unlike all of those others, and instead, is something totally fresh.

This movie is not about Christmas spirit at all. It is barely even about Christmas. Instead, what we have here is basically a prequel to the holiday and all of the traditions that are associated with it. The movie tells the story of a mysterious town in the middle of nowhere and how events in this town led to the aspects of Christmas that we know and love today. The main character is not actually Santa Claus, but instead is a spoiled and wealthy postman named Jesper who is not very interested in doing his job. As voiced by the very talented Jason Schwartzman, the character is arrogant and fun in all the right comedic ways.

When we meet Jesper, he is living at home, in a mansion, enjoying a life of luxury. That means he has silk sheets (which he keeps reminding us about,) whatever food he desires, and servants to wait on him. Jesper’s father isn’t exacly thrilled with his son’s carefree attitude. He has Jesper work at the local post office and train to be a postman, and Jesper fails at every aspect of the job. There’s an entertaining montage that shows how little he cares about each test that is put before him. The delicate packages test, for example, ends with Jesper kicking a package down the stairs. The idea is that Jesper thinks he has found a loop hole to life… if he keeps pretending like he is trying, but failing, he can keep living the life of luxury with his father just accepting that his son is trying.

Only this isn’t true. Jesper’s father is wise to his son’s ways and is fed up with the boy’s lazy attitude. And so he ships Jesper out to a town called Smeerensburg, in the middle of nowhere, all the way up by the north pole, where no postman has ever had success before. The father doesn’t expect Jesper to be successful, but he does expect his son to have a rough wake-up call and learn that life isn’t so easy all the time. The assignment is that Jesper needs to set up a working post office in this location, and to send out six thousand letters within a year. What Jesper’s father knows, that poor Jesper does not, is that this town is full of people who hate each other and are constantly at battle with one another.

The two groups that make up the townspeople are the Ellingboes and the Krums. They dress in different colors and are always keeping away from each other, hiding behind closed doors or staring out windows at their enemies. When Jesper arrives in the town by ferry, the local postman, who takes mail in and out of the town, tells Jesper to ring a bell. No sooner does he do this, than everyone on both sides of the town charges at each other for a giant battle, that Jesper is caught right in the middle of. It’s certainly a wake-up call of a way to be introduced to this super violent and hate-fueled town.

Jesper spends his days trying to figure out what is going on here. He notices that there is a school house with a teacher inside, (Alva, voiced by Rashids Jones,) only there are no children. There aren’t even materials. Instead, Alva uses the classroom to chop up and hang fish. She is saving up her money from selling the fish to get out of this town. Jesper also comes across a little boy trapped in a tower-like house, who makes a drawing of himself stuck up there, that ends up in Jesper’s possession. One day, when Jesper is in the outskirts of town, he comes across a cabin. There is a large, overbearing man who lives in the cabin, with his giant beard. This man, Klaus (voiced by JK Simmons,) intimidates Jesper to the point where Jesper runs away so fast that he drops the picture the boy made.

Klaus now goes outside and takes the picture off the ground. He is saddened by the idea that a little boy might be trapped like this in a house, and he goes and finds Jesper. Klaus has toys that he has made, and he gets Jesper to deliver one of those toys in secret one night, to the little boy’s house. Part of the secret is that Jesper sneaks in through the chimney. Then he and Klaus return to their usual lives, with not intention of speaking about this event ever again. Only something happens. The boy who received the toy tells others about it. The next day, Jesper has a line of children outside of his post-office, wanting to write letters to this mysterious toy-maker.

The problem is that these kids don’t actually know how to write. And so they need to go to school to learn. Suddenly Ava’s classroom starts getting filled up with children eager to learn. And she starts slow, in doubt and disbelief about the whole thing, shocked by how excited these kids are just to learn how to write their own names. Each kid ends up writing a letter to the old woodcutter, asking for a toy. Jesper delivers the letters, and suddenly his post office has mail going through it. When Jesper comes across some kids who treated him badly, and wants to make an example out of them, he tells the kids that the Woodcutter only gives toys to kids who have been nice. He knows if you’ve been naughty or nice, and keeps two lists.

This is how the traditions begin. They start including other things like the hanging socks on the fireplace, the reindeer, and the giant sleigh. But there are a couple of problems. One is that the Woodcutter runs out of toys and refuses to make anymore of them. He has a sad story about how he made those toys for a child he was always hoping for, and now lives a life of isolation and misery. Another problem is the leaders of each clan who watch as most people in the town get on board with this “being kind to each other,” notion, and can’t stand it. These village elders want things back to the way they were before Jesper got there. They are the ones who want to uphold tradition and keep the clans warring with each other, and so they agree to put aside their difference and join together for a common cause… to stop Jesper.

This makes for a fantastic climax. First, it involves the people trying to stop Jesper by using trickery. They learn of the proposal where if Jesper gets a certain amount of letters out, he will leave Smeerensburg. And so they write more letters, getting the amount to surpass what was needed. This leads to Jesper’s father showing up to get his son. But then when things still don’t go the way the elders planned, they try to physically stop Jesper, sabotaging the sled filled with toys. It’s all a lot of fun. So is the way that Christmas gets tied into this, simply because Jesper is trying to make a deadline, and realizes that he says the Woodcutter will deliver the toys on Christmas, and only on Christmas, he will suddenly get a flood of letters all written right now. It all works. Even the flying reindeer get explained. This movie is a true gem. It is very clever and a whole lot of fun. And as far as Christmas movies go, this one is very different.