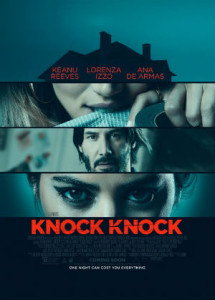 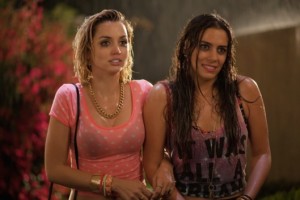 Really good in the first half, but there’s just nowhere interesting left to go after that.

Eli Roth once again shows that he knows how to direct seduction, in all of its careful planning and setup, just like he did with Hostel and Cabin Fever. Only this time, he doesn’t quite stick the landing and get the horror element right. The story of the two girls who show up to the house and slowly seduce Evan is fantastic. So is the filming of scenes around the house before the girls even arrive, with Evan spending a cold, rainy night home by himself. It’s only once the next day rolls around, and the girls turn out to have a different agenda planned than Evan was aware of, that the movie stops being as strongly executed. By the next night, the planning on the part of the writers seems to stop, and the movie becomes solely about the girls getting this guy. There are lots of interesting paths this movie could have taken in the second half, and its unfortunate that instead, the story settles for being exactly what you would expect, and absolutely nothing more.

Knock Knock is actually a pretty decent film. That shouldn’t come as a heck of a lot of surprise considering the director, Eli Roth, is talented at his job. Roth’s best movie is still his first (as is the case with so many directors who had great breakout films,) and that movie is Cabin Fever. After that, he made Hostel, and it was actually a clever and scary horror movie. I never saw the second Hostel movie or the Green Inferno or anything else Roth did, but from the two mentioned examples, he’s clearly a man with some skill. And Knock Knock shows that off as well. He sets the tone just right and really gets the first half of this movie pretty perfect. It’s the second half, where the girls unleash their true side that the movie doesn’t quite work as well.

The first thing we see, at the start of the film, is this really interesting house. There are pieces of art everywhere. Sculptures in the backyard, giant clay structures in the living room, and we move through the hallways taking all of this in. We also take in all of the artwork on the walls. It isn’t long before we meet the couple in the master bedroom and learn that the wife is an artist, completely dedicated to her work. Evan (Keanu Reeves,) and his wife, Karen are in the bedroom getting ready to celebrate Father’s Day when there kids come storming in with a present and a cake. Keanu Reeve’s monster routine is a little annoying, but we get over it and move on.

The mom and kids are going away for the weekend, leaving Evan home alone to get his work done. Kind of an unlikley scenario for father’s day, but it does put him at the house by himself on a dark and stormy night, and boy does this night turn out to be a lot of fun. There are tons of tracking shots moving down the hallways as Evan blasts music on his record player and takes advantage of having the place to himself. He is about to smoke a joint when there is a knock on the door. Even answers it, and there are two girls standing there, soaking wet.

The girls come in and use Evan’s Ipad to check their email and get the address of the party. Turns out they are very far away and the driver of the cab they arrived in took them to the wrong street. He misheard them. Evan calls the girls an Uber, but it will take forty five minutes for it to get there, so the three of them are stuck together for a while. They ask if he would be okay with letting them throw their clothes in the dryer to heat up, and he agrees, giving them robes. The girls then entice him in some sexual conversation and occasionally touch Evan. He is clearly uncomfortable, moving away from them every chance he can get, but they don’t make that so easy.

The flirtation scenes are fantastic. I love the way Roth drags these out, allowing us to experience what is happening in real time, as if we are there alongside Evan. He gets into some pretty enticing conversation with the blonde girl, Bell, after learning that she is Spanish, just like his wife. They discuss his records and Evan plays her a sensual, Spanish song. The girls then go to the bathroom and that’s when the Uber driver arrives. Evan goes to get them, opens the door to the bathroom, and finds out that they are naked and waiting for him. The rest of the night goes exactly as you would expect, with the three of them getting it on.

Evan wakes up the next morning to the usual cliche wakeup sequence in this type of movie, where he’s wondering if it was all a dream. Especially as he walks around the house and doesn’t notice anything. But then he hears the girls in the kitchen and sees that they have made a mess. He’s not happy with them for still being there, and they don’t respond well to his new attitude. The girls refuse to leave. When Evan threatens to call the cops, they tell him that they are under age and that he will be the one who gets in trouble with this, not them. At one point, Evan’s massage therapist arrives, (Colleen Camp, from one of the great rainy night stuck in a big house movies, Clue,) and the girls make a scene to show that Evan is having an affair while his wife away. The therapist gets very disturbed and leaves.

After realizing that his only move is to call the police and get these girls out, no matter what it means, Evan picks up the phone and dials. The girls hang it up, but agree to leave if he will drive them home. This is pretty much the halfway point of the movie. It has already started to go downhill, with the girls refusing to leave in the morning, but that first night was all great fun. Evan drives the girls home and then spends the day cleaning the house up, getting rid of any and all evidence that they were ever there. At this point, the movie takes a turn for the worst. The girls show up again, inside his house, and attack him. They then spend the rest of the movie holding Evan prisoner.

With this, its as if the movie kind of ran out of ideas. It’s like they gave up, and said “we’ve worked very hard to get here, setting everything up just right, but now let’s just have the girls torture this guy for the rest of the movie.” Sure, it’s what you would expect, but its sad to think about how many different, better, and more clever places this movie could have gone. Think about the movie Sleuth for example, with Michael Caine and Laurence Olivier. The whole second half of that movie is about a murder having taken place and one character knowing where all of the evidence is around the house, while the other character tries to figure out clues in order to find all of it, before the police arrive. Even Clue was about cleaning things up and figuring things out before the police arrived. With Knock Knock, there is no such challenge. This is simply about getting away from the girls and nothing more.

Luckily the torture is not as bad as it could have been. There are no body parts removed or anything like that, (which was a real possibility considering this is the guy who made Hostel.) Instead, the girls really just put headphones on Evan and blast music into his ears to the point where he thinks he might go deaf. They play a sort of gameshow with him, and seem to be having a lot of fun, but then his wife’s art dealer shows up, and suddenly things get a lot more violent.

The movie really worked nicely in the first half, taking the time to create the setup and seduction by these girls. This is something that Roth has always been able to do well. With Cabin Fever, he created some real sexual chemistry out on the docks with his two romantic leads, before all the horror started going down. With Hostel, the whole reason boys ended up in the torture chambers was because they allowed themselves to be seduced by topless girls at the pool. Roth is a master of the seduction scenes, but clearly not as great with the horror elements. Here, he drops the ball simply by running out of ideas. I’m glad the movie didn’t cheapen out on the ending, either with false happiness or a reason for the crime such as revenge for a way Evan wronged someone they loved in the past. Nothing like that. But considering that the movie took the time to avoid the usual cliches, it would have been nice if it also took the time to come up with some clever ideas of its own. This film doesn’t. There are interesting questions raised, like how do the girls know about Evan’s monster routine, but no answers are supplied. It’s one more example of the laziness this movie takes on in its second half. The film starts out great, but it definitely falls apart as it goes on.