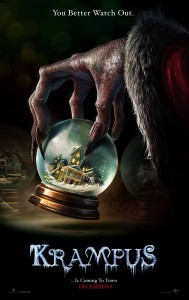 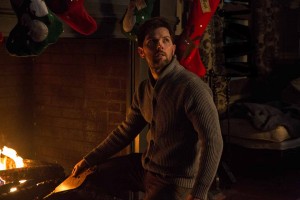 A pretty entertaining and fun movie for about three quarters of the way through, until the attacks start happening and creatures get worse and worse the more they are revealed.

An enjoyable and creepy kind of movie that combines horror and black comedy nicely, this film is about the evil spirit of Christmas. It is a movie by the same writer / director who made Trick r Treat, which captured the essense of one night, Halloween horror film. Here, director Michael Dougherty does it again with Christmas, giving us the story of a family al coming together for dinner one night, only to have their world turned upside down. First its a blizzard that snows them in. Then the electricity goes out. And after that, it’s all kinds of things supernatural. The movie succeeds in giving us scares and entertaining fun for about three quarters of the way. It does this mostly by keeping the real horrors hidden, letting us only guess at what’s coming. It’s in the final quarter of the movie, when creatures start attacking, that the suspense goes out the window and some stupidity takes over, including a terrible cop out of an ending.

Krampus is surprisingly a pretty decent movie. The surprise aspect comes from how little buzz or attention this movie got, considering it’s likeable cast and cool premise. The movie is about the evil spirit of Christmas. The Krampus is the shadow of Santa Claus who comes for those who are naughty. It’s a movie that stars Adam Scott, Toni Collette, and David Koechner. And the film is directed byMichael Dougherty, the man who came in with the low budget Halloween horror film Trick ‘r Treat, (which he both wrote and directed,) got such little support from the studio that it was released stragith to DVD, and then got people to turn heads with how entertaining the movie was. That film definitely had its flaws, but it also showed off some real talent and potential. Krampus is an even better film.

The movie is all about a holiday from the perspective of horror, just like Trick ‘r Treat was. Also like that film, this is basically an all in one night movie. A major difference, however, is that Trick ‘r Treat followed multiple storylines and characters, whereas Krampus is about a single family that is more or less stuck in one house. Those kinds of movies about one house and one night and being trapped inside, are usually pretty cool. You get to know the characters and the layout of the setting better than you would in other films where characters could roam anywhere at free will. And then there’s the claustrophobic element to it, perfect for a horror movie.

The movie opens with sa low motion montage of people attacking each other at a giant toy store, running in, stampeding over employees, and fighting it out over certain toys. This all takes place with the song “It’s The Most Wonderful Time of the Year,” playing, and the slow motion pacing of everything mixing with the music is just perfect. So is the humor of it all. This is supposed to be a special, magical time about coming together in happiness, and the toy store scene shows the reality of what the situation is really like. It ends with a boy attacking another boy and the parents pulling the first boy off. These parents are Tom (Scott) and Sarah (Collette.)

When they get home, we learn of the reason for the attack. Tom and Sarah’s son, Max, was attacking the other boy because the other boy was insulting Santa Claus. Max still believes in Santa, and in fact he is currently in the process of putting the finishing touches on his letter to the North Pole. While in the house that night, we also meet Max’s sister and grandmother. The grandmother is Tom’s mother who mostly speaks in Austrian, which only Tom and Max seem to understand.

That night,Sarah’s side of the family shows up for an evening of dinner and staying over. This includes her sister, Linda (Allison Tolman, the breakout star from the first season of Fargo,) her husband Howard (Koechner,) as well as their four kids (one is a baby,) and the aunt to Sarah and Linda, who never stops making comments about things. The Aunt is meant to be the comic relief with her in your face drinking and bluntness with remarks, only she isn’t all that funny.

At dinner that night, two of Linda and Howard’s girls steal Max’s letter to Santa and read it out loud at the table, making fun of him. He gets so angry that he grabs the letter, runs up to his room, and wrips it up. Then he throws it out the window and watches it blow up into the air. That’s when a severe blizzard hits and shuts off all the power. Max’s sister, Beth, asks to go out and see her boyfriend, who lives just a few blocks away. The parents agree to let her go, only Beth never comes home. We follow her out on her walk for a little bit, as she spots the Krampus off in the distance, jumping on rooftops from house to house. At one point she gets under a car to hide, only to have it find her, with us seeing only what Beth sees… the Krampus’ hoofed feet.

When Beth doesn’t come back a long time, Tom and Howard decide to drive around the neighborhood looking for her. They find the boyfriend’s house and some pretty bizarre things inside. First off, the front door is wide opened. Secondly, there’s s a massive hole in the wall above the fireplace, where something appreas to have burst out.  And on the refrigerator, stuck there by a knife in its chest, there is a gingerbread man. All of this build up is fantastic. And then we get our first attack when the boys go outside. The Krampus or something under the ground that remains unseen attacks Howard. Tom shoots it and it runs away, but not before destroying Howard’s car.

The guys get back home and board the house up. Whatever’s out there, it is not getting in. Then they take turns on sitting watch and Howard falls asleep during his shift. Everyone else in the family has fallen asleep too. Now this part is ridiculous. For Tom and Sarah, their daughter is missing, and considering that Tom went to the boyfriend’s house, saw what was there, and was then attacked by something outside, Beth is presumably dead. And yet Tom and his wife can both fall asleep. No way. They would be pacing the house, freaking out, worried sick about their daughter. Getting past that, they do fall asleep and that’s when the fire in the fireplace goes out. The grandmother’s warning to them was to make sure they keep the fire going.

Now, with the fire out, a ginger bread man attached to a wire and chain falls down the chimney and when the heavy son of Howard goes to eat it, the gingerbread man comes alive and attacks. He wraps the chain around the boy and it gets pulled up through the chimney. The family members all start freaking out, except for the grandma, who seems to know what’s going on. She then tells them all the story of the Krampus and that’s when some mysterious boxes in the attack start popping opened and attacking. Each of these boxes, which were delivered on the doorstep by someone unknown and brought in by Linda, features a different toy. There’s a teddy bear, a clown, and a few others.

The toy attacks is where the movie starts to go downhill. The movie just stops becoming clever and instead becomes kind of dumb. Granted the gingerbread man attack on Howard in the kitchen is one of the best and funniest scenes in the movie, but other than that, the movie just keeps on getting worse. Luckily, it’s already a good three quarters of the way in. The Krampus himself isn’t handled very well. Neither is the cop out of an ending that becomes kind of predictable the more that likeable characters die. The movie was pretty good and entertaining most of the way through, but it sure could have used a better ending.