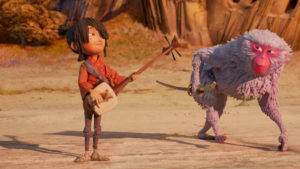 A fantastic movie about a boy on a quest to find three pieces of armor, while also learning his family story about love, death, and betrayal.

This is an incredibly cool animated film about a boy in Japan who is dealing with evil ancestors that are after him and a mother who tries to hide him. Both the boy, Kubo, and his mother, have magic abilities. With Kubo, these come from his guitar. When he plays the two strings, paper folds up into origami creatures and comes to life. Kubo uses this trick to his advantage throughout the movie. When his evil aunts and grandfather come after him, Kubo is forced to go on a mission ton find the lost armor that his father was after. He meets a talking money, a man-like Beetle, and an origami samurai, and together they travel to get the different pieces of armor. Only they are pursued along the way by the mom’s evil sister and father, and have to deal with attacks by these character’s too. The result is a very exciting and creative movie.

Kubo and the Two Strings is a pretty incredible animated movie. It’s got all the mysticism, magic energy, and spirit ideas that any great anime film, such as Princess Mononoke or Spirited Away might feature. But this movie also has a lot more. The look of the film is one of flawless stop motion animation, which means everything we are watching has been done practically with miniature puppets and machines that move the puppets through the space. Quite different than the usual drawing or computerized drawing animation. And then there’s the storyline and ideas about a boy on a quest, and the secrets of his past, that he discovers along the way. It’s all pretty fantastic.

At the start of the film, we hear Kubo’s words. “If you must blink, do it now,” His voice-over tells us about a hero in trouble and how we best not look away. And then the movie opens, and we see a flashback to Kubo’s mother at sea, wrestling with a ferocious storm, and washing up on the shore with a baby wrapped in a red robe. This is Kubo. We jump about a decade to now meet him as a young boy who plays a guitar and only has one good eye. Kubo lives with his mother in a cave, on top of a mountain, where they are isolated from the rest of the world. His mother is depressed and practically catatonic. She only comes alive after sundown, so to speak, and that’s when she gets into it with Kubo, telling him stories of his father, the great Samurai warrior, Hanzo. But even when his mother does tell a story, she forgets where she is, loses track of what’s happening, and never gets to the ending.

Kubo goes to town each day, finds an area to set his bag down in the middle of the marketplace, and performs. This is where the movie starts to get cool. Kubo hits the strings of his guitar and colored pieces of paper start flying out of his bag, moving around in a circle, spinning while they hover over the ground. Then the paper folds up, in mid-air, origami style, to become the characters in Kubo’s story, and the characters do battle. We’re talking about a samurai soldier, ferocious beasts, and even a giant chicken. The samurai fights and slices through each one of these creatures. It’s both humorous and fun. There are even paper effects (like spraying confetti,) to represent blood. And, just like his mother, Kubo does not give his story an ending. Instead he tells the crowd to come back tomorrow to hear the rest.

Back at home, with his mother, we learn a little bit about Kubo’s story. Kubo’s grandfather and his mother’s evil sisters are out to find them. The grandfather is the one who took Kubo’s eye, and they also killed his father. Now, Kubo and his mother are in hiding, and the rule is that he can never go out at night. If he does, then his grandfather will see him and come for him. And of course, Kubo does go out at night, which causes what his mother warned him about to happen. At least there’s a good reason why he does it here. A woman at the market tells him about contacting the spirits of dead loved ones at the graveyard and how you have to light a lantern on the person’s grave at night, and Kubo tries to do this for his father. The sun goes down while he’s still at the graveyard, and his two twin Aunts show up.

The mother’s two sisters, who are basically witches. They dress in long pointy hats, move by gliding above the land, and never have any change of expression on their faces. Even when they speak, their mouths do no move. They show up at night and use magic to drive dark energy forces through the town that devastate everything around them. The way this sort of mystical magic force moves like a wave through the air is similar to the kind of thing you might find in Kung Fu Hustle. So is the way that characters strum guitar strings and waves of energy go flying at the enemy. The mother shows up to face off against the sisters and there is an explosion of light. When Kubo awakens from all of this, the world is very different.

Kubo finds himself in a new land, covered with snow. His monkey charm, that his mother warned him to always carry wherever he went, has now come to life. A giant white monkey sits beside Kubo calling his name when he wakes up. It’s a female monkey, and she becomes his guardian, watching over him and helping him get food. This character, known as Monkey, was brought to life by Kubo’s mother using the last of her magic. And now they are on a quest together to find Hanzo’s armor, the only thing that can keep him safe from his aunts and grandfather. Only there’s a problem. Neither Kubo, now Monkey, have any ideas where they should look.

Luckily, an origami samurai comes to life while Kubo is sleeping, and starts pointing to the direction they need to go. He’s like a living compass. Kubo and Monkey head on their way and Kubo starts playing his guitar to create origami birds that fly around. He’s having a fun time walking on the ledge of a cave while Monkey is on the ground below, until Monkey looks up and sees that Kubo has gone missing. She chases after a shadow that seems to be carrying him and that’s when she finds Beetle, a man dressed in a beetle outfit who moves like a beetle and says that he used to be one of the samurai who served under Honzo. He offers up a robe, similar to Kubo’s, as his proof.

And just like that, our group has gone from two (Kubo and Money,) to four, now including the origami samurai and Beetle. Their mission is still to find the armor, and now they start getting to it. First they arrive in a cave where the mouth of the cave is shaped like the teeth of a skull. Inside the cave, there is a hand with a sword in it, and when Beetle grabs the sword, bones starts flying up all around them, and a giant red skeleton appears. This becomes their first real obstacle. Their next one comes from a garden of eyes that are under the water in the ocean, and hypnotize you when you stare into them.

But it’s not just the monsters and creatures and obstacles to getting the armor that Kubo and his team have to deal with. It’s also the evil sisters. When Kubo and his team take a ship out to sea (made of leaves that Kubo’s guitar playing put together,) Kubo goes underwater to get the helmet from the garden of eyes, but Monkey stays on the ship. And that’s when one of the evil sisters attacks. This is the sister who wields metal hooks on the ends of chains, and she flies around, throwing these chains around and spinning the hooks in her hands. It’s a very cool action scene, and while Monkey is fighting this villain on the ship, Kubo and Beetle are dealing with the eyes under the water.

The movie goes on to have the characters deal with one villain after the next. It’s the first sister, then the next sister, and then the grandfather. And they also continue their quest to get all three pieces of armor. These two situations play side by side all the way to the end, to the point where the location of the final piece of armor also happens to be where Kubo and his friends get attacked by the final enemy. All of this makes for a very exciting and action packed film with some spectacular visuals. There are minor flaws, or small areas that could have been tightened up, but they ultimately don’t harm the movie very much. One is that the coolest obstacle to getting the armor, the giant red skeleton, is also the first one. They kind of start going down after that. Another is that when characters die, we don’t really see it. Instead the movie does things like cutting to all white and having the audience just assume that the character who was fighting our hero is now dead. Still, these things are small, and what we really have here is a very cool and creative movie. This one  has a terrific story and every frame looks terrific. What. cool movie.