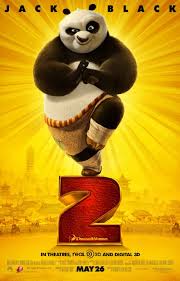 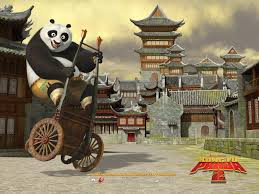 The action is fine, the story is okay, but nothing in this movie measures up to the greatness and memorable qualities of the first film.

It’s a fine movie with the same likeable characters as the first film, but this movie still isn’t nearly as good. the plot is okay, about a villain with ties to Po’s past, but it ends up being more serious than funny. consider the story of the first movie, where this big fat uncoordinated panda had to become the dragon warrior. the action is also not quite as good, with lots of action scenes, but none of them really that memorable. there is humor here, and the actors doing voices are all top notch, including a bunch of new additions from Gary Old man to Danny McBride. but compared to the first movie, this is just an average sequel.

Kung Fu Panda 2 is an entertaining and somewhat interesting film. The reason for my shock is that the original film was terrific, but really seemed like a stand-alone picture. It was the story of a nobody rising up despite tremendous doubt from both others and him, to become the legendary dragon warrior. That kind of story can’t exactly be repeated again. He already is the dragon warrior; he can’t just start over and rise up another time.

And yet most sequels tend to be more or less retreads of the original film. Just look at the hangover 2, for example. So how in the world were they going to take this original movie, full of wit, action, and a great plot, and spin another story out of it? They did it by giving us a totally different plot. One that expanded on the character’s past through back-story of how he came to be. It’s basically the usual revenge story, and not even close to as much fun as the first film, but you have to give them credit for going for something different, instead of just rehashing the same plot as the original.

In the first movie, one mystery that was never explained was how Po (the loveable fat panda, voiced by jack black), ended up being the son of a goose chef. After all, they are different animals. There was a moment in that film where the father called his own over and told him that he had something important to talk to him about. He said that he hadn’t been honest with him about something and was now ready to tell him. The build up was there, making us think he was going to reveal to Po that he was not the panda’s true father. And then the punch line, he was just trying to tell Po about his secret noodle recipe.

Well, this second film does explore Po’s past. It gets into what happened to him and his parents and how the goose came to find him and raise him as his own. Po’s parents were attacked and perhaps killed by an evil peacock warrior named Shen (Gary Oldman). And now, as the dragon warrior is living in the mythic kingdom with the other members of the furious five, (The animal fighting team,) Shen rises up again.

Shen has a number of cool beasts working for him. He’s got gorillas and wolves, all with cool weapons. Shen himself has a tail filled with sharp feathers that he launches through the air like daggers. And his plan is to steal all the metal from the villages of china and to use it to build an ultra-Powerful cannon that will make him invincible. The creatures that work for him are cool looking, but they aren’t used the way they should be. The giant gorillas, for example, are easily defeated in battle with two quick hits, and don’t even smash through walls trying to hit their targets, incredible hulk style, the way they should.

There’s a lot of talk in this movie about how Po is trying to save kung fu, and that idea never really worked for me. He’s trying to defeat the guy who killed his parents, or a madman (mad peacock) who’s trying to take over the world, or a terrorist, or anything else, but he’s not trying to save kung fu. I suppose the idea is that the cannon, if Powerful enough, can make kung fu a thing of the past. In that sense, maybe this movie is trying to be like once upon a time in china, the classic Jet Li movie where foreigners start bringing guns into china and karate is no longer as Powerful as it once was. I know that this was all rooted in real history, but it just seems silly to keep talking about trying to save kung fu.

Still, the storyline with Shen rising up as a villain from Po’s past is pretty cool. I like that it connects to something which will further our understanding of who the Po character is, instead of just being a routine movie where a bad guy Pops up and has to be defeated. The plot is fine, but it is the action scenes that are lacking. That’s not to say there aren’t a lot of them. There are certainly plenty. In fact, there are more action scenes here than the first movie had, only very few of them are memorable.

The first movie had a handful of action scenes that took place in such great settings, that you could remember each scene based on its location. There was the rope bridge scene, or the bad guy’s prison escape scene, for example. Here, in the sequel, there is none of that. Nearly every action scene feels like the others. The scenes happen quickly, and are even a little confusing as to exactly what happened. Sure, I enjoyed the scene where Po rode around in a chariot while some little kids were hanging onto his head, blinding him from seeing the road, but there weren’t many other scenes like that, worth remembering.

The story is also not nearly as good as what the first film had to offer. Yes, I like that it’s a vengeance story that connects to Po’s past, but the thing is, he’s the dragon warrior the whole time here. There is no humor about how dumb, fat, or uncoordinated he is. In the first movie, those jokes were really the entire film. With Po being on top of his game from the very beginning, in this movie, there is also little room for humor. The movie finds jokes every now and again, but they can’t even compete with the jokes about the fat panda and the ridiculous idea that he could be the dragon warrior, from the first movie.

Kung fu panda 2 is okay. The first movie was a masterpiece, and this follow up really Points out just how great that first film really was. This sequel is fine, and everything about it is fine, including some nice talent for the voices, some cool action scenes, and a worthy plot. But the movie should have been more than fine. The villain should have been better than Gary Oldman could give us (of course he created one of the greatest villains of all time, in the professional, but here he isn’t given the same kind of r rated freedom to cut loose.) I love Oldman, but Ian McShane really dominated as a villain in the first film, and old man just can’t compete. that’s pretty much the story with this whole movie.