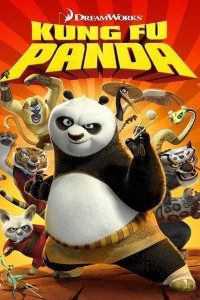 Kung Fu Panda is one of the better cg animated movies of the decade. that’s high praise considering that just about all of these movies, from ratatouille to wall-e to up are good. they are also all pixar. Kung Fu Panda is dreamworks, and that’s probably the reason it is more cute than serious. dreamworks animation is the studio that brought us shrek. both studios make movies that kids and adults can share in, but pixar has a tendency to make the classier films, even if that leads to them being kind of dull (wall-e) are kind of depressing (up). Kung Fu Panda is none of these things. it is an absolute butt-kicking thrill ride and it doesn’t even try to be anything else.

the movie begins with the legend of the panda, told with anime-style illustrations. jack black narrates, and does a very funny job talking about awesomeness and things like that. the characters in this opening sequence don’t say much, but what they do say is very funny. things like, “there is no price for awesomeness or attractiveness.” or, “we should hang out.” followed by another character responding, “Agreed.” all of it ends up being a dream as we wake up from the legend into the real story about a fat panda bear named po who works at a noodle restaurant.

po dreams of being a kung fu master and plays with toys of the furious five, a team of heroes who are well-known in the land. each of these members is a different animal and each of the animals chosen has it’s own martial arts fighting style named after it. po and his father talk a little about noodles and how working here is his destiny, although po doesn’t seem too thrilled about it.

all of that is setup. it’s how we meet the character and learn of his interests. but the big event is right around the corner and it will take place at the temple high up in the mountains. the master of kung fu, oogway, a turtle, is about to pick the one who will be named the dragon warrior. shifu, a mouse, voiced by dustin hoffman, is the master who trains the furious five. oogway, is shifu’s master, the equivalent of an old wise man, and delves out spiritual advice that is often pretty clever and cool.

po makes it up the mountain to see the ceremony where the dragon warrior will be picked, only he doesn’t make it into the temple. he now tries all kinds of ways to get over the temple wall, and every one of them fails. most of them end up hitting him in the face or slamming his body into something. finally, he tries tying fireworks to a chair and makes it over the gate.

there’s only one problem. he lands right in front of master oogway’s finger, when oogway is pointing to the one who will be named the dragon warrior. everyone thinks that this was an accident, but oogway insists that there are no accidents and that things happen for a reason. now it is the job of the furious five, and mainly of shifu, to train po and make him into the dragon warrior.

but there’s also another problem, a long time enemy of the group, named tai lung, has just escaped from a heavily secured prison. his prison escape scene is one of the best sequences in the movie. it is extremely elaborate and really goes to great pains to show how secure this place was and how many challenges tai lung had to get past in order to get free. the head guard is voiced by michael clarke duncan, a fantastic choice for the part. duncan has that big tough guy deep voice, as he place the battle rhino prison guard, who thinks his prison can hold anyone.

the second half of the movie is all about tai lung. he is the threat that po must deal with in order to prove to everyone that he really is the dragon warrior. but first he must train and learn martial arts, and watching that happen is a lot of fun. especially at the start of it when he is just a clumsy oaf falling all over the place. there’s a great sequence where he tries to take on each member of the furious five, one at a time, and fails in all kinds of ways. my favorite is when he tries to fight mantis and ends up just falling all around the inside of a bowl.

but then the real training starts as shi fu, (who at first is no more convinced that this po is the real dragon warrior than the others are), finds a way to break through to him and use po’s strengths and interests to his advantage. there is a great training scene involving a chopsticks and a single dumpling as po and shi fu go back and forth trying to wrestle the dumpling from the other one.

Kung Fu Panda is a wonderful movie for two reasons. the first is the humor. it is absolutely fantastic here. the voice casting is dead on perfect, starting with jack black, who is a natural talent. there’s no question about it, he made this character his, and added his own personality into the character. and all of the voice actors who surround him are on top of their game too, from angelina jolie to seth rogen to dustin hoffman. the second reason why the movie is so great is the action. the movie holds nothing back when it comes to that and thinks of elaborate locations to stage it’s action scenes (a rope bridge!), and some cool ways to go about them. this isn’t the kind of movie that has a scene with the character hanging from a rope as the mission impossible music kicks in. instead, this movie is it’s own thing. it spoofs nothing other than the martial arts genre. it is a very smart film with wonderful visuals and for all of these reasons it is one of the better cg animated movies yet to be made.