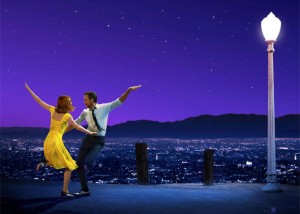 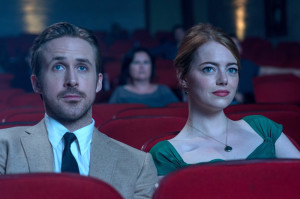 A pretty entertaining musical with likable characters and amazing colors and camera work.

A very different and creative movie, this one disguises itself as a romance, but it is very far from that and branches away from the patterns of that genre in all kinds of directions. One is the way that this takes the form of a musical and has the characters bust out into lively and colorful songs on a number of opportunities. Another way this movie sets itself apart is by making the characters more concerned about themselves and their pursuing of their dreams than they are of the relationship between them. This movie prides itself on how different it is than what we might expect, and that makes it a pretty unique and creative experience.

La La Land is a fun movie. It’s a film about two young people in the entertainment business trying to make it in L.A. Sebastian and Mia are both struggling in their professions and in their lives. They have a couple of chance encounters before officially meeting and hitting it off, and all of that becomes the first half of the movie. The second half is about their relationship and about their opportunities to pursue their dreams. This is a movie about characters who take chances and who don’t always succeed with them. These two are uncertain and even somewhat broken down misfits, but they find inspiration in each other, and that goes a long way to pushing them forward.

Aside from all of that, it’s a musical, and a hell of a good one. From the opening number on, this movie is filled with artistic creativity. The film opens on one of those Los Angeles super highways during a traffic jam where the characters sit angrily behind their steering wheels, wishing they could move. Then one woman hops out of her car and bursts into song. Then another. Each with a more colorful and vibrant outfit than the next. Pretty soon we have a full blown musical number of characters dancing on cars and rolling around on the hoods, all over the highway. The movement and choreography are fantastic as characters begin to bring out their bikes and skateboards and jump around on them, onto and over the cars. But what really stands out is the camerawork and tracking shots that capture the movement by swinging around to different areas of the screen at the exact moment something is happening there. It’s a fantastic opening sequence.

At the end of the sequence, the cars have  started to move, only Mia(Emms Stone,) doesn’t realize it as she sits behind the wheel of her car. And so other drivers start honking at her, and Sebastian (Ryan Gosling,) has to drive around her just to get past, and gives her the finger as he goes by. This is their first meeting. From here, we start to follow Mia in her life as a wanna-be actress, working at a coffee shop on a studio lot, and going to auditions every chance she can get.

We watch Miah go through a series of auditions, all during a montage, and they are pretty funny. Then we see her at home, with her roommates who bring her out to a nighttime party in the valley. There’s another musical number as the girls get ready, and then still another one at the party, with characters sitting around a pool and even jumping in. All of these musical numbers are colorful and entertaining, and one has to remember that this movie is by the director of Whiplash, a fantastic movie that was about music. He knows how to choreograph moments to the beat. Whiplash might be the better movie among the two, but La La Land is certainly the more ambitious one, doing everything on a much larger and more lavish scale.

When Mia leaves the party and can’t find where she parked, she walks the streets and stumbles into a quiet restaurant and piano bar. That’s where Sebastian is talking with the manager and getting ready to take the piano and do a set. His directions are clear. Play only Christmas music. In fact, play only things from a set list that the restaurant manager (played by JK Simmons,) has created. Of course Sebastisn goes off book from the set list and dives into his own rift. This immediately gets him fired. And on his way out of the bar, he runs into Mia for the second time. It’s while she is on her way in. Miah tries to compliment him, but Sebastian snubs her and leaves.

From here, we go back to that highway meeting from the opening scene, and this time follow Sebastian in his story. We meet his sister and learn about how he’s single and having a hard time holding down a job. Then we go with him to that piano bar, where apparently he has worked and been kicked out of before. This time the manager goes over the rules with him, and we watch Sebastian break them and get kicked out again. We also understand why. He’s too much of a free spirit and entertainer to just sit there playing the kind of background music that these people wouldn’t even notice. He wants to give them something memorable that he can pour his heart into. Only that’s not what the manager wants, and it costs Sebastian the job.

The next time Sebastian and Miah meet is at an outdoor, daytime barbecue party. Sebastian is in an 80s cover band playing guitar. Miah walks up to the band and requests that they play the song “I Ran,” by A Flock Full of Seagulls. Then she geeks out and starts dancing to it like crazy. A little while later, Sebastian comes and find her at the party and they get to talking. He remembers her from the piano bar. The question is, does he remember her from the highway too? Either way, they hit it off now, and start dating. They share their dreams and ambitions with each other, and Miah even gives Sebastian ideas for named for the jazz club he wants to one day open. She tells him to call it Seb’s. There are some scenes of Sebastian explaining jazz to Miah, which feel a little pretentious, but it’s one of the only things that doesn’t quite work about this film.

One night when out at dinner, Sebastian runs into an old friend of his, (played by John Legend.) This friend has a band that he would like Sebastian to come and play in. Sebastian decides to give it a shot. It’s far from his kind of music, but the money is there, and the opportunity to spiral this into other, bigger things seems promising. Only Miah doesn’t understand. She feels like Sebastian is selling out. Meanwhile, she pushes herself to take chances more than she ever has before, renting out a theater and putting on a one-woman show. The movie does a nice job here of presenting parallel stories that are both the same and different. They are the same in the way that both characters are taking a chance, doing something that might lead them in the right direction. But what’s so different is that in Miah’s case she is pursuing exactly what she wants, whereas Sebastian is most certainly not.

In the second half of the movie we have the inevitable fights and separations that most romantic comedies have. Only this one is. a little different. It isn’t about hitting the right beats at the right formulaic moments, the way those other movies are (and also, this isn’t a romantic comedy, but more like a romantic drama.) Instead, this movie does have the fight, but it’s solution isn’t to just have the characters get back together and put the fight behind them to continue the romance. Instead, this movie stays true to the characters’ dreams and has them continue to pursue these, even if it gets in the way of them being with each other.

There are a number of reasons why La La Land works so well. The first, is that it is a musical told with fantastic colors, numbers, and choreography. The second reason is the way that the first half of the film shows multiple scenes from different points of view (the highway, the piano bar,) to show us how each character sees a situation and than what these characters were doing at the same time as the other one was doing something else. The story might at times resemble the usual romantic comedy, but this one has a very different agenda and is more about the character’s goals and dreams than it is about the romance. Finally, the movie works because of its ending, which very cleverly goes the opposite way of most movies that fall into this genre. Call it the Casablanca version of an anti-romance, where what you don’t expect to happen, happens. The reason why this is so important is because had the movie stepped into that usual pattern of ending in the predictable, everything works out neatly way, that most movies do, this entire film would be looked at differently. It’s the ending which gives it that extra push in making it stand out as something special.