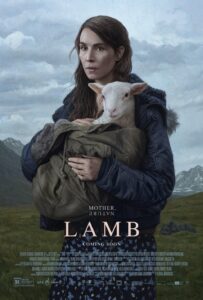 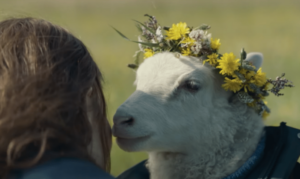 Incredibly uneventful, the nice music and scenery only count for so much when there’s so little happening in the plot.

Here’s a movie that definitely has an interesting premise. The problem is that the ideas aren’t handled correctly. For example, we don’t learn until halfway through the movie, exactly what is going on. And while that might have worked if at the half way point, things were suddenly made clear, in this movie they aren’t. And the fact that it takes so long to reveal what is happening (or might be happening,) only makes it more confusing and questionable when things are finally revealed. To be more clear, when we finally see a lamb with a child’s body, we don’t know if it is real or if it is in the characters’ imagination. The movie is about a mother and father who take a lamb-kid in as their child. There’s a very cool ending here, but the problem is that as soon as it happens, the movie is over. So just when the movie finally gets interesting, it ends. This is a pretty big problem in a movie that is already slow and uneventful.

Lamb is a strange movie. It’s a quiet movie that acts like and seems like it has substance, but ultimately it’s a pretty empty experience. The movie is about a couple on a farm, living a quiet, secluded life of solitude. This is a foreign, Icelandic film starring Naomi Rapace of The Girl With the Dragon Tattoo and Prometheus.  The couple takes care of animals on their farm, including mostly sheep and rams. And the movie is about what happens when they take one of the lambs and raise her as their daughter.

It’s a strange concept to be certain. And if there were more people for them to interact with, it might have been more interesting. For example, let’s say the wife, Maria (Rapace,) talk to lamb, (named Ada,) to town. Let’s say there was a scene of her and this baby in a restaurant with people looking at them, starting with the waitress. Only here, in this movie, there is no town. The are no other people other than the brother of the husband. That’s right, there are only three characters in the entire movie, (not counting Ada, the sheep,) and only one location… the farm.

So clearly the movie is limited in terms of setting and character, but that doesn’t mean anything so long as the story is good. This one isn’t. Instead, it’s kind of empty. We watch the couple deliver baby sheep and take care of them at the start of the film. This includes putting out hay in clumps in a line in the center of the barn for the sheep to eat, and helping baby lambs nurse from their mothers. At times it feels more like a documentary about the process than it does a movie with an actual story.

And then one day the couple delivers a lamb that is different than the others. Only they don’t tell us how it is different. Not until about the half way point of the film. Instead, we watch as Maria and her husband, Ingvar, dust off their old wooden crib (they clearly had a child that died at one point, which is why they have a crib just sitting by,) cover Ada with a blanket, and nurse her with a bottle. Now, for the rest of the first half, we will only see Ada under a blanket. Even when she is outside, in their arms, she will continue to have a blanket over her body.

Now, the movie has a reason for doing that… Ada actually has a human body. Only there’s a problem. Because the movie waits so long to show us this, and because by the time we do see it, we are used to Maria and Ingvar treating her like a real child, there is a very strong possibility that this whole human body thing is all n their heads. Like this is the way they see her. After all, we thought we were looking at her body for most of the movie already, only it was under a blanket. So this idea, which is basically the main idea of the movie, is not made clear or told in a way that is clear at all. We never really learn if it’s in the couple’s head, or if the lamb really does have a human body. And while ambiguity is often a good thing, in this movie that already has so little going for it, not knowing only makes things worse.

The reason why it makes things worse is because if this really is a story about a lamb with a human body, then that’s a cool idea. And it should be explored and questioned more. Why does this lamb have a human body? Who are her parents (this question gets answered at the very end, and by that time it is too little too late.) None of the three characters even mentions the human body. There’s never a comment from the brother, for example, where he asks something like, “why does she have human hands?” And that’s part of the reason why it seems like maybe this is all in the characters’ heads. How can nobody ever address it? Not even the couple themselves, when they first deliver the baby. This is obviously intentional, as the director doesn’t want to give away his “surprise,” to the audience too soon, but by waiting as long as he does, it’s more of a problem than it is a surprise. Let’s put it this way… the lamb with the human body is essentially the story here. It’s the main idea. It should not be left for a surprise, and if it is, then it shouldn’t come out in the middle. That’s waiting too long. And it also should be made more clear.

Because there is so little going on in this movie, the story adds the character of Petur, Ingvar’s brother at about the halfway point. His introduction seems promising, as he is taken to the house by a group of people that keep him in the trunk of their car. They get to the barn, throw him out of the trunk, and drive off. And then we see Petur sneaking around the outside of the house, spying on this couple. We have no idea that he is the brother at the time, and so the ideas that we come up with in our heads have no bounds… is he a criminal that the drivers thought they were taking to the middle of nowhere? Is our couple now in danger from this phsychopath.

All of these ideas are far more interesting than anything in the actual movie. The truth is Petur is the brother and he’s just a little creepy. That’s it. Now, going back to that point from earlier about how nobody ever mentions the human body, the closest we get comes from Petur. He asks the couple what they are doing with Ada and tells them that she’s an animal, not a child. And Ingvar responds that what’s happening here is “happiness.” It’s very poetic, but not very fulfilling in terms of answering questions. The couple never even mentions whether or not they did once have a child who died. You would think that would come up, with one of them saying something like, “we need this. After what happened to -.” But this movie isn’t about answering questions or really giving the audience much to work with. It’s about being very vague and pretty much telling as little as possible. To be fair, we do get a scene of Maria going to visit a grave that says Ada on it, so we can assume they once had a daughter named Ada, and she is the one who died.

At one point, there’s a sheep that keeps coming out of the barn and standing outside of the window where Ada sleeps. Maria has lots of problems with them and continues to take this sheep back to the barn. When the sheep follows her and Ada out into the meadow for a walk, Maris turns around and yells at the sheep to go away. Only the sheep doesn’t listen. And eventually Maria takes out a shotgun and shoots the sheep, right between the eyes. Then she drags it out to the field and buries. We later learn from Petur that this sheep was Ada’s mother. That’s a sad idea. It’s about the only interesting idea in the movie.

And then there’s the ending. Without spoiling anything, let’s just say it’s one quick moment and it is the first sign of real life or hope or creativity in the entire film. And yet, just as soon as it happens, the movie ends. Imagine if this moment happened earlier, like in. the middle of the movie. We would have gotten a whole second half that followed up on it and showed us more. Instead, we are left with the surprise moment, and then that’s it. This movie is supposedly horror, and yet that one ending moment is the only thing remotely scary in the entire film. Other than that, this one is pretty dull. Now I do think seeing it a second time, knowing the truth about Ada’s body would lead to a more enjoyable experience, but on a first viewing this one is pretty lousy.