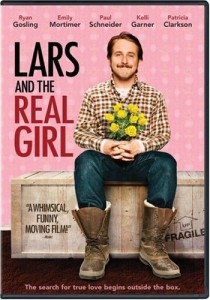 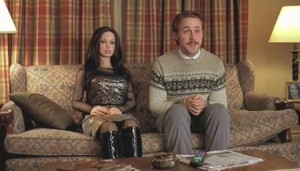 A very unique and creative sort of psychological movie.

Lars And The Real Girl is a very strange movie. It’s a psychological film about a guy who is delusional. That guy is Lars, a young man who lives in the garage of the old house that he used to live in with his parents. His brother and sister in law live in the main house right next door. They constantly invite Lars over for things, but he’s the kind of guy who keeps to himself and likes it that way.

The other main characters we meet are, of course, Lars’ brother Gus, and his wife, Karin Gus is played by the guy who plays Mark Brandanowitz on Parks and Rec. And Karin is played by Emily Mortimer, who is still breaking in when this movie was made in 2007, but has since gone pretty far. She’s been in Redbelt, Shutter Island, and My Idiot Brother. Mortimer seems like a nice actress, but she also always seems to be whining. I suppose that’s just her voice, and not really such a big deal. Karin is concerned about Lars early on in the film because of the way that he keeps to himself and seems to have nothing going on. Then one day Lars tells her and Gus that he has a girl staying with him and wants to introduce her to them. In fact, he wants the girl to stay with them at their house, since she and Lars are not married. Karin and Gus can’t wait to meet her.

And then Lars shows up with the girl. And she’s a doll. A sex doll. She is human size, and Lars is convinced that she is a real person. The movie handles this pivotal scene where Karin and Gus meet the girl, perfectly. It just shows them sitting in the living room, frozen. They are staring at the doll, named Bianca, and both of them are completely speechless. Lars goes on and on telling about Karin, and he even pretends that she is talking to him and talks back to her. Gus and Karin are completely clueless about what to do.

The psychological part of this is that Lars has made rules in his head for how he can justify this and make it make sense for him. Bianca doesn’t walk, obviously, and so Lars says that she is in a wheel chair, only he wheel chair was stolen from the airport. That means that Bianca needs to be carried everywhere, and Lars has no problem doing that for her. He also blocks it out when Gus tells him, at one point, that Bianca is not real, and instead, starts talking right over Gus, pretending he never heard a word of what his brother was saying.

Gus and Karin do the only thing they can think of, which is make an appointment for Bianca to see a doctor. That’s what they tell Lars, anyway. Of course, it is really Lars who is going to see the doctor. That doctor is played by veteran actress Patricia Clarkson, and she is the authority in this movie. She’s the one who tells Gus and Karin that they must go along with this. They need to see where Lars goes with it, and by playing along, maybe they will be able to discover more about Lars and what led to him creating this person. But if they tell him the truth and break his fantasy, the results can be very detrimental.

And so they do go along with it. I like how they don’t just agree to that, though. It takes a good deal of convincing. At first, neither Gus nor Karin agrees to this. They feel like playing along is just enabling Lars, and they feel like it’s going to be a huge embarrassment in the community they live in. Karin is the one who gives in first, understanding that maybe this is what Lars needs from them. And then Gus isn’t far behind.

The rest of the movie is really about how the whole town ends up playing along. They start having Bianca join their clubs and school boards and associations. Karin keeps a calendar on the refrigerator of all of Bianca’s events, and she is incredibly busy. Bianca basically becomes a member of the community, and that’s because everyone is nice and wants to feel like they are helping out. It’s a little hard to believe that nobody would say anything, not even a kid. The movie does have that one scene where Gus tries to tell his brother, and we see Lars block it out. I suppose we’re just meant to assume that anytime something like this would happen, Lars would block it out. Still, we could have used at least one more scene of someone trying to tell Lars the truth. It’s almost like The Truman Show, where everyone in the town is in on this secret, but nobody wants to tell the main character.

As the movie goes on, we are entertained with an unusual problem and a society that plays along with it, but we also have a pretty good idea how this movie might end. That comes from the title, “The real girl.” Bianca is obviously not the real girl, and so somebody else must be, and from the very beginning, before we even meet Bianca we meet the girl at work who is interested in Lars. The only problem is, Lars is with Bianca. And he even tells this other girl, when they go bowling one day, that he would never cheat on Bianca. So figuring out a way for him to get from being with Bianca to being with this other girl becomes the challenge of the later portion of the movie.

Lars And The Real Girl is a good movie. It’s something different. There have been movies about characters who have imaginary friends before, and this isn’t really very far off from that, but by giving us a doll as something to represent the friend, the movie suddenly gets a lot more personality. There are all sorts of opportunities that come as a result, such as a scene where Lars takes Bianca to a party, or another one where he asks Gus to buckle her up in the passenger seat. The movie is very unique and creative. My big problem is that everyone in the town so easily goes along. There would certainly be those who had a problem with what everyone else was doing, lying to Lars, and hiding something from him that everyone else knew. But nobody really tries to tell him anything, and the movie tries to sidestep that as best as it can. Other than that problem, everything else in this movie flows smoothly. I really like the scene of the movie where the doctor starts getting at the way Lars feels about being touched and why he might have created Bianca to begin with. Unfortunately, that scene is never followed through on and carried further. Maybe that’s because this movie has so many other plot points in it’s path. There is a nice storyline here and it’s an enjoyable, but strange film.