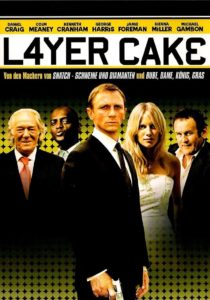 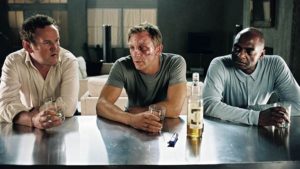 One of the best British gangster films, this one might be pretty complicated, but it’s style and suspense easily make up for any problems.

An exceptional British gangster film, this movie is about somewhat low-level criminals who have aspirations of making it big. They’re not young punks who worship Scarface or anything like that, but older, more seasoned, and more reserved characters. Daniel Craig (in the movie that most likely for him the role as James Bond,) plays XXXX, a man so secretive that nobody knows his real name. He’s a guy who tries to maintain control and exercise caution over everything, and yet in this movie he’s thrown one curveball after another. We watch as his character navigates through the underworld, doing jobs for different mob bosses, while trying to figure out where the next threat is coming from. The movie is pretty complex, to be sure, but not so much that you can’t get the gist of it, even if you don’t catch everything. And the film is stylish as all hell.

Layer Cake is a fantastic movie. It’s the debut film of director Matthew Vaughn, who has gone on to direct tons of great movies afterwards from X-Men First Class to Kick Ass to Kingsmen: The Secret Service. Notice a pattern here? This guy loves comic book movies. He knows how to use computer effects perfectly to tell interesting and humorous stories. And Layer Cake was his debut. It’s more serious than most of the things Vaughn has done since, but there’s some comedy in this movie to be sure. Black comedy. This is the story of some very dark figures in the gangster underworld of London, and it’s one of the best British gangster films of all time.

Before Vaughn became a director, he was a producer, and he produced the early Guy Ritchie movies. Films like Lock, Stock, and Two Smoking Barrels and Snatch. Great movies on their own, those films went more for the comedy, whereas this one goes more for the seriousness. And all of these movies are incredibly sleek and stylish. It’s all about the look, and Vaughn knows that better than anyone. This movie, about a low level gangster rising to the top is like taking the first half of Scarface, (before Tony Montana got big,) and making a movie just about that. It’s about an underdog who is outmatched and outwitted and forced into a very threatening situation where he has no idea where the threat is coming from. The element is similar to what the protagonist of The Long Good Friday has going for him, and that is one of the most well-known and most classic British gangster movies of all time.

With Layer Cake, it’s about the business more than anything else. And the business is selling drugs. Daniel Craig plays XXXX, a man who is super cautious about everything he does or touches. That’s why we never actually learn his name. Nobody knows it. He doesn’t want to go anywhere near the violent side of the business and hires a friend named Morty to do that for him. Morty is basically the muscle. And he’s but one member of XXXX’s crew. Other’s include the chemist, (played by a young Tom Hardy,) and the middleman, Gene, (played by Colm Meaney.)

Gene is connected to the real boss, a man named Jimmy. Gene is Jimmy’s right hand man and the guy who brings Jimmy the kind of people he’s looking for. In this case, that means he brings in XXXX and his crew to do a job for Jimmy. Over a breakfast at a fancy restaurant, Jimmy explains to XXXX exactly what that job is. It turns out to be two jobs. The first is to locate a girl who has gone missing. Jimmy tells XXXX that the girl is the daughter of one of his colleagues, Eddie Temple (Michael Gambon,) and that XXXX will be helping Temple out.

The second job is to sell some drugs that a renegade gangster named The Duke, and his crew have just stolen. They’re looking for a buyer, and Jimmy plans to take the drugs off their hands and then resell them to someone else.  With all of this, what we’ve basically got is two stories, for the price of one. This might feel like a cheap play, (or like they got to this spot way too easily,) but the truth is that one story ends up dominating while the other one is barely touched. And that’s a little more realistic. The story of the drugs becomes the primary situation, whereas the one about the missing girl takes a backseat. And that’s understandable considering XXXX’s response when asked to take that job, telling Jimmy that he’s not a private detective and doesn’t know the first thing about finding people.

And so XXXX hires some friends to look into the missing girl situation, while he himself goes and pursues the drugs. And now we follow the Duke and the crew that has the drugs to see the way that they got them, breaking into the greenhouse of some high-level Serbian gangsters and stealing them. The Serbs aren’t too happy, and they’ve hired a guy named Dragan to now come after XXXX. And people in the underworld who XXXX hopes to sell the drugs to know about this, which means they want no part of buying them, for fear that the Serbs and Dragan will be coming after them next.

Meanwhile, XXXX still has to buy the drugs from The Duke and even that proves to be more difficult than it should. The Duke isn’t exactly willing to part with the drugs for the kind of price that Jimmy has authorized XXXX to pay. He has to go through a cousin of the Duke’s just to get to him, and the only thing good that comes out of that is that XXXX meets the girlfriend of this cousin, Tammy (Sienna Miller,) and falls for her pretty hard. And she feels the same way about him, as the two of them start up a secret relationship.

Meanwhile, XXXX gets a few visits from Eddie Temple who isn’t so happy to learn that XXXX is looking for his daughter. Turns out his daughter is fine, and the whole thing wasn’t authorized by him at all. He even has some pretty interesting things to say about his old colleague, Jimmy. If all of this sounds complicated, it’s just scratching the surface. The movie can definitely be more clear than it is, but there are enough thrilling scenes in here to allow anyone to get the gist of what’s happening, including Eddie Temple as the big boss, and Dragan as the quiet assassin that XXXX must constantly be looking over his shoulder to try to avoid.

With all of this, the movie finds the opportunities to make time for smaller, unrelated, but stylish scenes. These scenes often involve great music and sometimes humor as well. The Duran Duran song Ordinary World has never been used better than it is here, in a scene where Morty shows his temper by beating a guy in a restaurant half to death. We later learn the reasons why. Another example is the entire relationship between XXXX and Tammy. She’s not really connected to either mission that XXXX is on, and makes for a fun and entertaining side plot of pure eye candy, (she literally has scenes where she walks around in lingerie.)

Layer Cake captures the staples of these kinds of movies nicely, including the unknown threat that can come out of nowhere and the male comraderie scenes of guys stuck in bad situations together (just like those Guy Ritchie movies had.) The only negative about this movie is how complicated the storyline is, but when stripped down to the basics, the general ideas are pretty clear. And whenever something happens, and it seems confusing, we end up finding the truth out about what happened and why, later on. This is a very smart movie and Matthew Vaughn uses it to demonstrate just how talented of a filmmaker he really is.