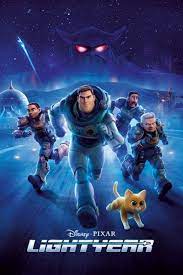 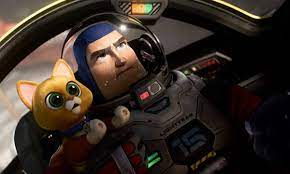 A fun, yet forgettable Pixar movie, this one is definitely entertaining, but not especially deep or thought provoking.

This is an enjoyable, guilty-pleasure type of movie. By that I mean it’s not too deep or thought provoking, but it sure delivers on the action and excitement. Buzz accidentally gets stuck with a colony of people on another planet. And when he tries to get them off of it, he finds himself being transported into the future, much like in Interstellar (every time he returns to the planet, four years of life on this planet have passed by.) Eventually Buzz finds himself so far into the future that an alien-robot race has taken over, and Buzz must work with a rogue team of three other misfits (think Guardians the Galaxy meets Star Wars, only here they are all humans,) to save humanity. It’s nothing too wild or memorable, but it is a good deal of fun.

Lightyear is a fun movie. The idea here is that the character Buzz Lightyear, from the four Toy Story movies, was a toy and was based on the character of a movie. This is that movie. The opening titles literally tells us this, mentioning Andy (the boy from Toy Story, whose toys they all were.) It talks about how Andy got a new toy after seeing a movie, and about how this was that movie. After that, there are no mentions of toys again for the rest of the film. Instead, this is an animated space adventure movie, about aliens and time travel. The movie opens with Buzz Lightyear (now voiced by Chris Evans, replacing Tim Allen from the Toy Story films,) travels through space with two other Space Rangers (one of whom is actually a rookie just starting to learn the job. The three of them are transporting a group of sleeping scientists to another planet, where they may be able to live.

Unfortunately things go wrong on the planet, before the colonists and scientists wake up, and Buzz and his crew, which includes Alisha Hawthorne, his second in command, are attacked by giant plants. They fight their way out of the attack, but by the time they are done putting down their enemy enough destruction has been done to their ship, that there can be no going back to earth. This causes a big problem for not only Buzz, Alicia, and the rookie, but for everyone on board who hasn’t been woken up yet.

A year later, Buzz has been at work on fixing the ship and preparing the hyper fuel they will need to reach light speed. He is ready to take his first test flight. The mission basically involves slingshotting himself around the planet (a term we learned about in The Martian,) and then landing in a tunnel of rings, going through one ring after the next to end the mission. Buzz doesn’t quite pull it off. The calculations on the hyper fuel aren’t correct, and Buzz lands back on the planet with Alicia, called T’Kani Prime. Only things have changed. Everyone on this planet is now four years older than when Buzz left them, about four days ago. Time moved at different paces in space, (something we learned from Interstellar.) Of course this is only a theory, and has never been proven, but here in the movie, the faster you go, the slower time moves.

Buzz continues to take these missions, trying out different possibilities of how to make the hyper fuel work to reach light speed. Every time he returns to the planet, another four years have gone by. We end up seeing a lot of this in montage and watch as Alicia continues to age, while Buzz stays the same. At one point Alicia gets married to a female astronaut and then they have a son. Eventually Alicia dies. Before dying, she left him a present, when he returned to the planet for the very first time. The present was a robotic cat named Socks. He instantly becomes Buzz’s companion.

When Alicia dies, the mission dies with her. Now there is a new commander in charge of the colony, Commander Burnside, and he has decided that it’s time to take a different approach. All of these colonists have been living here for so long now that they have started lives and many have raised families. They no longer want to return to earth. Buzz is being grounded. It’s funny how similar this is to an idea that happened in Top Gun: Maverick, just about a month ago, where a character also died who was in charge of the program and supported Maverick and his mission. Once that character passed on, Maverick found that the new director no longer supported his mission and was grounding him. And just like in that movie, Buzz’s response is to steal a rocket and take off himself, defying orders.

This time, Buzz leaves the planet for even longer. When he finally does return, he no longer recognizes the planet. It has become a destitute wasteland and robots have taken over. Buzz meets a crew of survivors who are basically a bunch of rejects and misfits. There’s Izzy Hawthorne, the granddaughter of Alicia,  who is afraid of space. Then there’s Darby Steele, an elderly paroled woman who is not allowed to use guns. Finally, there’s Mo Morrison who is wide-eyed, dopey, and naive about everything. Especially a pen he finds and then can’t stop talking about for the rest of the movie.

Buzz and the crew have a couple of run ins with the robots. There’s one robot in particular that they face off against and cause to lose an arm. This robot ends up pursuing them for most of the movie. It’s funny how they use the missing arm to differentiate this robot from others so that we always know this is the one from earlier on, and the same robot we have been watching the whole time. It’s kind of like how in Star Wars: The Force Awakens, early on a dying Storm Trooper touches Fin’s white Storm Trooper helmet with his hand, leaving the red fingerprints of blood on his helmet, so that from this point on we can differentiate this Storm Trooper from the others based on the red markings.

We learn that the robots all work for a creature named Zurg, who is the big bad on this planet. And the movie wisely takes its time showing Zurg, keeping him hidden in the shadows for a good while as we slowly start to see how big and menacing he is before actually meeting him. When we do meet Zurg, we learn that there’s a major twist about him. I won’t give it away here, but it’s one of those twists that is a double-edged sword. On the one hand, it’s so creative and interesting that it is definitely unpredictable and original. On the other hand, because it is so different that what we were expecting, it kind of takes away from what we thought of Zurg, as a cool alien robot, from the Toy Story movies (he started appearing in the beginning of the second Toy Story film, with Buzz fighting him in a video game.)

After meeting a new and unexpected character on this planet, Buzz and the character discuss the possibilities of now getting off the planet and returning to earth. The mission that Buzz had since pretty much the very beginning fo the film can now be solved. Only Buzz isn’t sure is he wants to do that anymore. Circumstances have changed. It’s a pretty cool character change, realization moment, and it definitely works. What doesn’t work as much is the lack of explanation for having two different timelines and characters who are from each other meet. The movie must have thought at a certain point that they had already explained how time moves differently in different locations in space, and so we would just go with this alternate timeline idea without noticing that no explanation was given. But we notice.

Lightyear is a good movie. It’s fun and exciting, and whatever there is to think about is right there on the surface, for you to consider during the movie. There’s no deeper meaning here, and sometimes that’s a good thing (many of Disney and Pixar’s film are thinkers that require multiple viewings to really get, and while they do work on basic levels for kids, they also work on much deeper levels for adults.) Lightyear isn’t really like that. It’s just a lively and enjoyable popcorn movie, without being a whole lot more. The ideas are fine, without being anything revolutionary or even all that memorable. And aside from that alternate timeline idea not being explained, for the most part they do a good job of covering their bases and telling a story about time travel and space exploration that mostly makes sense. Sometimes you need a guilty pleasure movie, even if its an animated film. This one is a nice success.