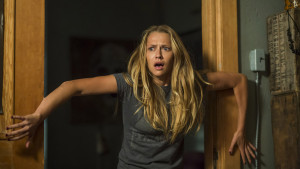 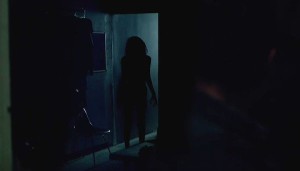 An entertaining concept isn’t enough to make for a whole movie that really only has one idea, and no twists or turns.

Lights Out is not a good movie. It’s a film that’s based on a very simple idea about a ghost who appears when the lights are out and then disappears as soon as the lights are turned on. This makes for a cool visual image, seeing what happens when the lights are flipped on and off, but not a whole lot more. And the story that has been crafted around it, about a mom who has a connection to the ghost, is pretty weak. The ghost herself, is little more than a shadow. And the storyline simply has an older sister take her brother away from the house only to bring him back and confront the ghost there, herself. There’s not much going on in this one. It would be nice to be able to say it should have been better, based on the premise, but that really isn’t true. The truth is, this movie shouldn’t have been made, when all it was working with was the most basic of premises.

Something very strange has happened to the genre of horror movies in the past ten years. Movies that aren’t really all that good have gotten lots of public praise. We’re talking about acclaim from both critics and audiences. Movies like The Conjuring, Green Room, and It Follows, to name just a few. It’s not that these movies are awful or anything, but to be really deserving of the kind of acclaim that they have received, the films need to to be somewhat creative and original. These movies are more basic and even lazy, than anything else. The Conjuring was a simple exorcism movie. Green Room had scary villains, but a premise that was way too simple. And It Follows was just kind of dumb.

I have yet to see The Babadook or The Descent, two other films that are on this list as being commonly known as good modern horror movies. But based on the track record, I wouldn’t be surprised if at most only one of the two of them is any good. Now, to be fair, there are some modern horror movies that are indeed worthwhile. Insidious (the first one, of what I believe has now become a trilogy) was great. It actually gave us a new world and dimension with new rules. And Don’t Breathe was kind of cool. That movie was what Green Room should have been. But more often than not, these movies aren’t worth the positive acclaim and word of mouth they receive. Lights Out is the latest horror movie to in no way live up to its positive hype.

This is is a pretty poor movie, with a very elementary plot. It’s about a deadly ghost who appears as a sort of shadow when the lights are out. Turn the lights on and she disappears. Keep them off and she attacks and kills. Simple solution right? Not when the lights aren’t working. Better have a flashlight handy. The idea makes for a cool moment or two. Just check out the trailer, and you see the visual of turning the light switch on and off, and what happens as a result. But to base a whole movie around this is pretty ridiculous.

It all starts in a warehouse where a woman who works there sees the ghost shadow whenever the lights are out. She turns the switch on and the ghost disappears. She turns it off and the ghost is back and moving towards her. The woman warns her boss and then leaves. The boss now finds himself being attacked by the ghost on the long hallway of the warehouse floor. This whole sequence is pretty cool. In fact, it’s one of the better sequences in the movie, and the creepiness is definitely enhanced by the fact that the warehouse is full of old mannequins.

The boss who was murdered is actually related to the characters who will be the protagonists of this movie. He was the father and former husband to the family. That means he was married to the mother, Sophie (Maria Bello.) There are two kids. One is from a marriage of Sophie’s that was before him, and then the young son is from him. The older child is Rebecca. She’s an adult who has her own apartment and a boyfriend (Bret) who constantly wants to stay over. Her brother, Martin, lives in the house with Sophie. All this despite the fact that Sophie is clearly unstable and mentally unbalanced.

Martin catches his mother talking to the figure of Diana, the shadow ghost. He immediately gets insomnia. When his sister finds out, she takes him away from Sophie, and brings Martin to stay at her apartment. Only the ghost follows them and appears in her apartment. Rebecca discovers this when she wakes up from a dream to find Diana there, hunched over on the floor. She uses light to drive Diana away, but the next morning finds the name “Diana,” written on the floor. Rebecca knows the story of Diana from her childhood.

As the story goes, the mom was friends with this girl named Diana in a mental institution when they were younger, and something terrible happened to Diana. Now the mom continues to see and talk to her. It isn’t long before Martin is back home and having a movie night with his mom. That’s when Sophie decides to tell Martin all about Diana and her story. It seems a little soon in the movie for the whole “secret” or reveal to come out, but that’s the way this movie does it. I applaud the film for not playing games with the audience, and having the mom be crazy from the beginning, for example, but at the same time, it seems to have no tricks, surprises, or clever ideas of any kind up its sleeve. That leads to a problem as the film goes on and the audience realizes there really isn’t any more to this plot than what we’ve already been given.

Rebecca and Bret decide to move in with the mom so that they can keep an eye on what’s going on with Martin. Let’s take a step back for a moment. First, we are to believe that Rebecca took Martin away from the house because it was unsafe, and then just brought him back and let him return home? This after seeing the ghost for herself, which would only reenforce the idea that her mom is crazy, (especially considering that she knows the story about the ghost and how it connects to her mom.) And then, we are also to believe that the boyfriend who wasn’t allowed to stay over at Rebecca’s is now moving into Rebecca’s mother’s house, when he has never even met Rebecca’s mother before? I suppose the argument could be made that one of the reasons he goes so easily is because he really wants to try living with Rebecca and takes this as an opportunity to prove himself, but that seems to be stretching it, and also, that point is never made clear.

One thing that is very annoying is that for most of the movie, nobody dies, and then suddenly some cops are called in. These are the nameless characters who will be the pawns of the film.The moment you see them show up, you know exactly what’s going to happen to them. The problem isn’t that the cops die, but that the movie seems to be picking and choosing who it kills in such an obvious and predictable way. I respect movies that kill main characters (like Don’t Breathe,) because it is realistic that they would die in the situations they are in, and the movie doesn’t want to sugar coat that. What I don’t respect is movies like this that only kill the expendable, nameless characters. Especially when nearly the whole film has gone by and nobody has died (since the opening scene,) and now, suddenly, a few new characters come along, existing for the sole purpose of giving the movie characters to kill.

Lights Out is not a very good film. It has no surprises or twists and is really very simple in all ways possible. This is the kind of movie that was made based on one visual image of an idea. What if when you turn the lights out, a ghost appears and when you turn them back on, she’s gone? From that, the whole story of Diana was crafted. I do like that one of the main characters is crazy, and the reason for this, but there are just so many mistakes that this movie puts itself through during the course of the film. It tells us Diana’s story way too early. It refuses to kill anyone, other than nameless expendable characters. And the story is little more than the brother and sister moving around from the house to her apartment to back in the house again. A movie needs to have more than just one simple idea to be made. With this one, you can feel them trying to stretch it out, every step of the way.