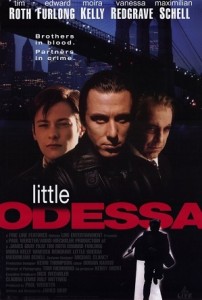 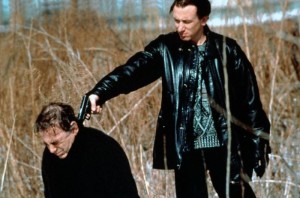 A decent crime movie that has the slow feel and artistic touches of an independent film.

This is an okay movie about a mafia hitman coming back home to do a hit in the town where he grew up. There are so many movies with storylines just like this, from State of Grace to Grosse Point Blank. Little Odessa doesn’t really do anything to make itself stand out, or differentiate itself from those others. There are two storylines working side by side here, and neither one is  very creative. The first is the story of Joshua (Tim Roth,) coming to town to do a hit. The second is of Joshua going to see his family. The stories work fine together, but on their own, they are both pretty basic and routine. The same can pretty much be said about this movie.

Little Odessa is a gangster movie about siblings and family. It’s one of those films like State of Grace or Animal Kingdom, where you don’t know who to trust, even if they are family members. Except, there’s one major difference. With this one, instead of multiple members of a family being involved with the mob, it’s really just one character. One older brother, who is the black sheep of the family. And the movie is in large part about his relationship with his younger, teenage brother, much the same way that American History X was. Both films star Edward Furlong as the younger brother, and here, Tim Roth is taking on the bad seed, older brother role.

The movie is directed by James Gray, and its his first feature length film. Gray was coming straight out of college with this one, having only made a student film beforehand. He was twenty-five years old when he directed this movie, and it shows. The film can’t compete with those other, better movies, but it is about equal to the movies that Gray made later on in his career. Those movies are The Yards, and We Own The Night. All three films are about brothers (in the two later movies, the brothers were played by the same two actors, Mark Wahlberg and Joaquin Phoenix.) Those movies were about pretty much the same characters as this one as well. Two brothers, a girlfriend (Charlize Theron or Eva Mendez,) and a father (James Caan or Robert Duval.) In Little Odessa, aside from Roth and Furlong as the brothers, the girlfriend role and the father role are also filled by name actors, Moira Kelly and Maximillian Schnell.

So Gray likes to make movies with the same family dynamic. Plenty of writers like to do that, going all the way back to Shakespere. And Gray does write his own movies. But the problem is that the movies he makes don’t really stand apart from any others in the genre. They are in no way unique, and Little Odessa is no exception. The movie is simply about a mafia hitman who comes home to do a job in his old neighborhood, and while there, decides to pay a visit to his family. It should be an in and out job and a quick story, but this movie manages to find all kinds of ways to drag it out.

First off, we don’t even get to see the main character, Joshua Shapira (Roth,) in the old neighborhood for a while. First, the movie opens with him doing a hit, shooting a guy on a park bench. Then there’s the phonecall giving him the job. And Shapira tries to refuse it, saying he’d rather go anywhere else in the world, than back to Brighton Beach, Brooklyn. Only he doesn’t have a choice. And so he goes back, and before even thinking about doing the hit, he pays a visit to the house where his family lives and stands outside one night, looking through the window.

That one evening is enough to throw the whole family storyline in motion. A guy who knows Shapira’s family saw him standing outside of the building, and then followed him to a nearby hotel that night. This guy now finds Reuben, Joshua’s younger brother, and tells Reuben that his brother is in town. He even tells Reuben the name of the hotel where he can find him. And so Reuben goes, and pays a visit to Joshua, letting his older brother know that their mother is dying. This causes Joshua to want to come home to see his mother one last time and say goodbye.

Meanwhile, Joshua is also planning the hit that he was sent to Brooklyn to take care of. He gets the guy who spotted him at the hotel and a bunch of this guy’s friends, and hires them to help him out. Together they plan the hit, and exactly how it will all go down. When somebody who works for the boss they are going after, recognizes Joshua, and tries to call his boss about it, Joshua shoots him dead while he is standing at a payphone. And when the boys are ready, they break into the home of this big boss, and kidnap him. They take him out to a junk yard and shoot him, before throwing the body in an incinerator.

Reuben sees all of this. He is off in the distance, having spotted Joshua earlier on, and then following him on his bike, afterwards. In this moment, he sees the truth about his brother first hand. Only it doesn’t really change anything. Reuben’s story isn’t really the gangster story. It’s the story about family. He meets Joshua a couple of times, and it seems that Joshua needs Reuben’s help to get into the apartment to see their mother. The same way that those other guys, old friends of Joshua’s from the neighborhood, are helping him with the hit, Reuben is helping him sneak into the apartment to see their mom.

The sneaking part is an issue because the father of the boys, Arkady Shapira, (Maximillan Shnell,) has disowned Joshua and wants no part of his son. When he sees Joshua, he immediately kicks him out of the apartment, calling him a murderer. He then blames Reuben for letting Joshua in. At this point, Joshua realizes he is going to have to find his own way in, and so he catches the father in an apartment with another woman, and uses this information to get his father to allow him to come see the mom.

There’s some backstory here, which isn’t really explored enough, about how the father was abusive to the boys growing up. We see Arkady take out his belt to hit the boys, a number of times, and when Joshua witness his father hit Reuben in the face, Joshua strikes back, protecting his younger brother, and saying, “he gets what I got?” At one point, after seeing a heavy bruise on his brother’s face, Joshua decides he has had enough, and sets the record straight with his father, once and for all.

Little Odessa is a movie with two different stories running parallel to each other. There’s the story of this hit that Joshua has to do, and also the men who are after him. Then there’s the story of this mafia worker coming home to see his family. The idea of having two different stories working together like this is pretty cool, but the problem is that neither one of them is very unique or creative. There isn’t much action here, and the small amount that there is all ends up being over pretty quickly. The story of the hit is completely routine, and almost pointless. The story about the family is a little better, and more original. The movie holds our attention, but it definitely moves too slowly. Maybe that’s a result of them not having enough content to put in this film. It looks artistic as hell, but it’s definitely light on story.