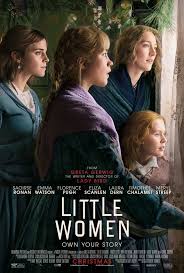 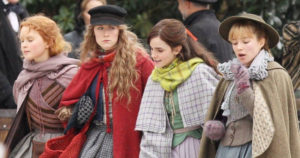 An interesting and entertaining movie that uses time jumps to keep us curious about the story and how it reached certain places.

A nice, solid movie, this one tells some simple yet entertaining stories about four girls during a critical time in their lives. This is the time of their young adulthood. It is the time when they are figuring their lives out and deciding what they want to do, and who to marry, if anyone at all. The movie is told out of order at times, which actually works really well here, because it gives you glimpses of where things will end up, and makes the audience curious about who they will get there. It isn’t an especially exciting film, but it is well made and the characters are enjoyable, and there is certainly plenty about this movie to appreciate.

Little Women is a classic story about four sisters growing up in the countryside and the romances and life experiences they deal with. They are all young adults throughout the duration of the story, which means they aren’t really dealing with childish things, but instead more life decisions, such as marriage, traveling, and job opportunities. That being said, what really helps this movie along isn’t the story itself, but the way it is structured. The fractured narrative technique, of telling the story out of order, has been used time and again, but it still works, and it works quite well here. I don’t know if the book is like this, or if it’s just this movies creative approach to the story, but telling it this way keeps us interested and curious,  as we try to put the pieces together ourselves.

The movie opens with Jo, a writer (Saoirse Ronan,) going to see an editor in his office about publishing one of her books. The editor is played by Tracey Letts, one of the greatest grumpy old men character actors around. And the scene ends up being a sort of negotiation about both price and story. It’s quick, witty, and entertaining. And it gets us going with knowing a little bit about Jo, this feisty and rebellious young woman. Everything about this scene is perfect, including the pauses and gestures that Tracey Letts makes, as he mulls over his decisions. Luckily, the movie will revisit this character in this location a few more time, (mostly towards the ending,) to give us a little more of a very good thing.

From there, we are into the present day, with Amy (Florence Pugh, an actress who is about to become very big when she appears in Black Widow, next year,) in Paris. They do flash the years for us, briefly, to help us keep track, but even still, it’s not especially obvious what’s happening. Basically, this movie is about to jump from the present to the past. So, in present day Paris, Amy comes across a guy names Laurie, (played by Timothee Chalamet,) who she knows from her past. At first, she and her aunt, (Aunt March, played by the great Meryl Streep,) come across Laurie when they are on horses, and all seems fine. But later that night, Amy runs into him again, at a luxrious party, and Laurie is not too friendly. He berates Amy while lying on a couch, indulging in whatever he pleases, (drinks, women, and lots of insulting.)

Now we jump back to the past, to see the girls (Jo, Amy, and two of their sisters,) when they meet Laurie for the first time. The movie tells us that this is the past, and the party story was the present, but it feels much more like this story of the girls growing up, which we spend much more time in, is the present, and the party story is more like the future. It probably feels that way because the amount of time we are spending in the “past” story and also because the quick scenes with the horses or at the party, feel like flash forwards that leave us wanting to know more about them. Especially with where they appear, so early in the beginning of the movie. While these might seem like minor points to quibble about, (who really cares if it’s past and present or present and future? It’s not a time traveling movie,) the truth is, the jumps back and forth between time are one of the best things about the movie, and certainly used to full effect here to keep the story more interesting and the keep the viewer curious and wanting to know more.

Going into the past story, we watch as two of the girls, (Jo and her sister, Meg – played by Harry Potter’s Emma Watson,) go to a wealthy house party, and both don’t quite fit in. In Jo’s case, she feels uncomfortable mixing about with these socialites. In Meg’s case, she is having a nice time and enjoying herself, but then she injures her ankle while dancing and needs to get out of the excitement to recover. Laurie comes their way, (this is the first meeting between them,) and helps both girls out. He talks to Jo about how he also does not fit in. And he helps comfort Meg, about her injure ankle. At one point, he even dances around the outside of the house with Jo, showing her that they can enjoy the same activities as the people who are inside are enjoying, but just not be caught in the crowd. Laurie helps the girls get home, and meets the rest of the family.

This is the March family. It includes Amy, who we have already met in that “present day,” story, and also Beth, the youngest of the sisters. There’s the adult figure of the house, Marmee, (played by Laura Dern, who won an Oscar this year for her work in the Netflix divorce movie Marriage Story.) By introducing us to the characters one at a time, (Jo first, then Amy, then Meg, and lastly Marmee and Beth,) it helps us keep track of who is who and not feel overwhelmed at any time. The Laurie character represents the audience, going in and meeting the family, and we take on his point of view, meeting each member right as he does.

From here, the movie turns into a series of vignettes. There’s the Christmas morning where Marmee asks the girls to donate all of their breakfast to a poor family with small children to feed. No sooner do they do this, than do the girls arrive back home to find a full table of food waiting for them, donated by their wealthy neighbor (Laurie’s father,) who saw their thoughtful gesture to the poor family. There’s Jo and Aunt March, sitting around discussing the importance of a woman getting married so that the man can take care of her, financially. And there’s Amy, hitting it off with Laurie, as he finds her outside crying after being struck by her teacher for drawing a sketch of him in class. Each of these scenes serves as a little side story, onto itself, filling in the gaps, telling us more about the characters, while not necessarily pushing the whole thing along in any clear direction.

And then we are back to the present day story, with Laurie apologizing for his behavior the night before, (the night of the party, when he was acting like a jerk, laying on a couch and spewing insults.) It’s nice to come back to this story, (the one that has so far been the most interesting, in large part because it made us curious of where it fit in, during the timeline, and how these characters got to be this way.) We learn that Laurie is angry at Amy because it seems like she might be marrying this man named Fred, just for money. Fred is a pretty boring and uneventful man, and a “safe,” bet as far as finances go. He’s the kind of guy that Aunt March was talking about when she spoke to Jo about the reasons for marriage. But Laurie doesn’t like him one bit, and seems to have a thing for Amy himself. Laurie, being rich of course, has nothing to be jealous of Fred about, with that one. But he’s not happy to see Amy making what he considers to be a grave mistake, and isn’t afraid to let her know it.

This isn’t the only attempt by a character to convince another to avoid romance and marriage. Meg is also planning to marry, and it is Jo who tries to convince her that this is a mistake. Jo is the rebel who doesn’t believe in marriage at all, and her talk with Aunt March has done nothing to persuade her otherwise. But Meg is not marrying for wealth, the same way that Amy was. So Amy does not marry, listening to Laurie’s advice, and rejects Fred’s proposal, whereas Meg does indeed go through with her marriage and gets hitched to a man who is not very wealthy, and doesn’t lead the kind of the lifestyle the girls are used to. Meg’s story will now be about her dealing with not having as much as she would have hoped for.

This pretty much marks the end of the first half of the movie, with Meg getting married, and the other girls in limbo about what to do with their lives. In the second half, we get a love triangle between Amy, Jo, and Laurie. We also get Jo being rejected by Aunt March, in terms of coming with her to live in Europe, (she chooses Amy instead, after she had already asked Jo,) and then the story of Jo and her book, dealing with the publisher from the beginning of the movie, again. There are other smaller stories at play here as well, including the long lost father of the girls, who is out fighting in the war, and what ends up happening to him, as well as the fourth daughter, Beth, who gets very sick. This movie certainly has a lot going on. It’s all entertaining and interesting, and while very little of it is edge of your seat exciting, it still compels you to want to see more, and know where these characters will end up.