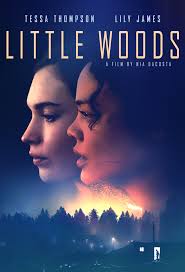 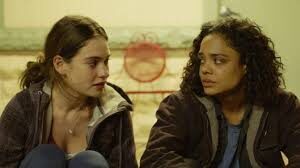 A pretty powerful and interesting film about two women dealing with a difficult situation.

Little Woods is an incredibly interesting movie about two sisters dealing with all kinds of conflict in their lives. One of them used to be a drug dealer who keeps feeling herself get pulled back into the game. The other one is pregnant, in poverty, and taking care of a young son. This isn’t exactly feel good material, but it is tense, smart, and leads audiences to really think about and even question their values.  It’s quite the experience.

Little Woods is a pretty unique movie about a woman trying to do what’s right, even if it means selling drugs to help someone else. It’s a movie loaded with conflict and moral ambiguity. Between the low budget and seemingly small town, simple story, this independent movie often seems like it could even be a play. It has depravity written all over it, as it chronicles struggles with money, jobs, poverty, drugs, and keeping one’s head above the water.

The protagonist here is Ollie, (Tessa Thompson,) a woman who lives in the house where she used to take care of her sickly mother before she passed away. Ollie also used to transport and sell drugs. And she was good at it. So good in fact, that now almost everywhere she goes she is approached by guys who know her from that former life and ask if she’s holding anything or wants to get back into selling.

Only Ollie doesn’t want to get back into selling. She was busted for transporting drugs over the Canadian border and has been on probation ever since. Her probation officer is played by Lance Reddick of The Wire and the John Wick movies, and as far as casting goes, you really couldn’t do much better. Ollie now has only about a month left on her probation. She also has a job offer from something promising in another state. Which means that if she gets the job, it’s a chance to get out of this town that only seems to know her as one thing. But of course there’s conflict with getting out of town.

The conflict is that Ollies sister, Deb,  played by Lily James, (from Baby Driver and Yesterday,) has a son and isn’t exactly doing so well. She and her boy are struggling to make ends meat. And Deb is pregnant again. She and her son live in a trailer in a parking lot where parking is for store customers only. Now Ollie has had a plan all along for how she Can leave town without feeling guilty about not helping Deb. The plan is to leave Deb and her son the house, that was their mothers. Only now the bank is closing in on the house because Ollie and Deb have not been making payments on it.

So the conflict is really a moral one. Deb is not really Ollie’s problem, and another movie might have Ollie just leave town for herself. But in this one, Ollie’s interest is in helping her sister out. Especially when she learns about the pregnancy. With this one, Deb is weighing her options, but quickly finds that without money or insurance, she doesn’t have very many of those. At one point, Deb goes to different doctors and clinics and prices out exactly how much it would cost just to have the baby. Without health insurance, she learns, it would cost her a fortune. And the movie really points out “how much it costs to be pregnant in America.”

All of this leads both Ollie and Deb onto less than desirable paths. Ollie goes back to selling drugs. She needs money fast. It’s a challenge to even convince the bank manager that she can gets half the money they owe in one weeks time. But Ollie does persuade him, and that means she now has to work fast. Meanwhile, Deb decides to have an abortion. Only without health insurance the only way she can really do that is to get a fake Canadian ID and go to Canada, where health insurance is free.

Ollie’s drug selling story is front and center in this movie, with a quick scene of her burying a bag in the woods at the start, to a guy showing up at her house looking to buy something shortly after that. This guy is no junkie. He’s just aN oil worker Who got injured on the job, and tried going to a doctor for pain medication, but had to wait seven hours, and so he left to go back to work. When it’s time to get beck to selling, Ollie goes and digs up that bag, and has the customers lined up, but she’s also got the local dealer wanting his cut. The way he sees it, Ollie’s taking business away from him and so he deserves some compensation.

There’s a fantastic scene where the parole officer shows up at Ollie’s house for a surprise inspection. Ollie has just dug up the bag of drugs at this point and rushes to hide it in the closet. And as the parole officer walks the hallway, and is about to open the closet door, you can feel the tension. This culminates with a fantastic moment involving that closet, once he leaves the house. And all of this leads Ollie to feel like her house is not a safe spot to stash the drugs. So she uses Deb’s trailer instead. And that seems like a good idea to both of them until one night Deb and her son find their trailer has been towed.

This movie is loaded with conflict. Even when it seems like there is a solution, we often get a new problem right behind it. When Ollie finds the trailer, she still has a problem with the drugs and money she stashed there. When they decide to go to Canada to kill two birds with one stone, (Deb can get the abortion and Ollie can transport drugs for the local dealer,) they still have conflict to face, including getting the fake id and A local police officer who gets inquisitive about what he notices.

This ends up being a very smart and entertaining movie. And it’s different. For a movie about drugs and drug dealers, there really isn’t much action here (those two things usually go hand in hand.) Instead, the conflict is more real world oriented. It would have been nice if at least one of the male characters was flushed out a tiny bit more (they are all side players here with no more then three short scenes each,) but this is still a movie that definitely works.