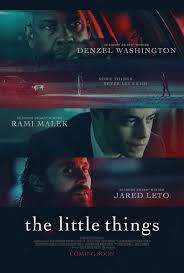 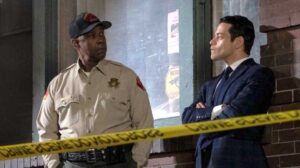 Here’s a detective-serial killer movie that was written in the nineties, takes place in the nineties, and for some unexplained reason got made today. There’s a reason why the serial killer genre of movies is dead and this movie makes the case that it definitely should be. There’s nothing new here at all. How in the world they got such A list stars to act in this one is the real mystery. The story and case these detectives are trying to solve involves for too many conveniences and plot holes. On top of that, it’s not very interesting at all. In fact, the movie waits until the very end to start getting creative. At that, it might be a little bit of promise, but it is far too late to save this one from being a dud.

Serial killer movies are a thing of the past. They’re a thing of the nineties. From the Silence of the Lambs to Seven, to all the many, many movies that tried to emulate those, the movies were great at the time, but they certainly don’t work today. The Little Things, a new thriller that feels pretty old,  is a perfect example of why. TV hour-long police procedural dramas most certainly have their shard of the blame with this one. They have pretty much replaced the movies with this genre. Shows like Law and Order, CSI, and True Detective, (and all of their many spin-offs.) So here we are today, with another attempt at a 90s throwback serial killer movie, and boy does it fall flat on its face.

Now, to be clear, movies that have a specific unique angle for looking at the killer situation can still work (although they are pretty rare.) Split, the M. Night Shamalan, multiple-personality-disorder movie from five years ago comes to mind. But that movie was completely focused on the killer and his victims. And it was more of a psychological movie than a standard killer movie. Split clearly wasn’t a detective movie. The Little Things, on the other hand, most certainly is. In fact, this movie is so far removed from the current state of things, that it is actually set in the nineties, as if to say the only way to even attempt a detective movie these days is to set it in a time period when they were actually still making those movies.

To be fair, the director, John Lee Hancock (The Blind Side,) wrote this movie during the nineties. He wrote it at a time when these kinds of movies were all around him. It was before cell phones. Pretty much before the internet. And it was definitely before social media. At that time, Hancock was solely a screenwriter penning the movies A Perfect World and Midnight in The Garden of Good and Evil. And here’s the catch… those two movies, which do dip their toes into the crime-killer-detective genre, are by far more creative and unique than this one. In other words, the movies he was making at  ethe time when serial killer films actually were at their height, were far more interesting and unique than this one, which was pulled out of nowhere and resurrected for no good reason at all.

So writer-director Hancock, having now directed The Blind Side, Saving Mr. Banks, and The Founder (that one actually being a pretty solid, creative movie,) decides to look back at his shelf of unused screenplays, dust one off from decades ago, and make it today. It’s not surprising that the results are pretty bad. What’s surprising is that Hancock got such A-list talent to be a part of it. Denzel Washington, Rami Malek, and Jared Leto. Three Oscar winners. From Glory and Training Day to Dallas Buyers Club and Bohemian Rhapsody. How in the world did these three guys sign on? To make matters worse, this is Rami Malek’s follow-up to his Oscar win. Couldn’t he have chosen something just a little better? A best guess to answer the question of why, is that Washington was interested (he’s made these kinds of movies before, although much better versions, from Fallen to the Bone Collector,) and then hearing that he was attached was enough to get the other guys interested. But who knows if that’s the truth?

The movie opens with a girl driving alone on a deserted highway at night, having a mysterious car pull up next to her, and then speed ahead. She continues driving and then sees the same car stopped on the highway up in front of her. At that point she speeds past the car, comes to a gas station, gets out of her car and runs all around the place, looking for someone who is there. Only there is no one. The place is closed. The lights are turned off on the inside, and she still continues to run around banging on the windows. Eventually this girl runs into the desert. The killer moves into the desert after her. Then she sees a truck coming down the road and she runs back out into the street getting the truck to stop. End of scene. Believe it or not, this is the most exciting scene in the entire movie. Sure it’s anti-climactic, (you expect a victim to die in the opening scene, just like in a horror movie,) but at least it got our attention with the idea that something might actually happen to this girl.

Cut to about a decade later, and we are with Detective Joe, “Deke,” Deacon. He’s working in a small California town and is told by his superior officer to take a drive over to Los Angeles and pick up some evidence which might pertain to a case they are looking at. Deke gets there, to the Los Angeles sheriffs office, and he meets Jimmy Baxter, (Rami Malek,) a young detective working a case. Deke hears a little about this case, and makes a connection between something that is mentioned and something in a case he was working that still remains unsolved. Baxter likes the way that Deke thinks, and makes connections and so he asks him to stay on and work with him. Deke takes some vacation days with his own department so that he can stay in Los Angeles and do just that.

Now, there are a handful of problems here. First, we are to believe that just in going to the station for a quick moment to pick something up, Deke is able to overhear something and make a connection between two cases. Seems convenient. Secondly, we are to believe that just they easily, the head detective stops what he’s doing to bring Deke onboard. And thirdly, there’s a situation where Deke used to work here at the Sheriffs office in Los Angeles, and something bad clearly happened that caused Deke to have to leave. It also casuals him to never get promoted, no matter where he worked, despite having the highest clearance rate. This isn’t the unbelievable part.  The unbelievable part is that nobody will tell Baxter what happened. The way gossip works in this world is that people do tell stories about other people. Especially when the stories are from many years ago. But this movie clearly has an agenda, which is to keep the story a secret so that they can do a big reveal at the end. Audiences are too smart for this nonsense.

So Deke and Baxter start working together and Deke zeroes in on this one guy who he thinks did the murders. This is Albert Sparma (Jared Leto.) The reasons for suspecting him are pretty limited. Sparma lives near where the victims were found, is a single white man, and has a car with a lot of trunk space. Jared Leto is pretty good here, and is clearly a talented actor (unlike Rami Malek, who despite winning an oscar, clearly has only one monotone note he can play.) But despite Leto’s performance, there’s not a whole lot going on. We’ve gotten the villain who outsmarts and outplays the heroes storyline over and over again, and this one isn’t much different. Deke follows Sparma until Sparma catches on and pulls up in a car right next to Deke’s. At that point Deke brings Sparma in for questioning.

The interrogation scene is about as dopey as everything else in this movie. It involves Sparma taunting the Detectives and Deke losing his cool. Without any evidence and just some vague suspicions, these detectives really don’t have much to go on, and they know it. And so we get a scene where the Detectives orchestrate a plan to get Sparma out of his apartment while one of them goes in there and illegally searches the place. All of this is meant to set up the idea that these Detectives will do just about anything to catch this guy and to stop him. It’s not all that interesting, but it does help lead the movie to the ending, which is actually one of the only creative parts of the film. So the illegal apartment break in and search happens, and it culminates with Baxter and Sparma taking a drive out to the desert.

Its hard to not talk about the ending when it’s really the first and only interesting part of the entire movie. There was that opening with the gas station chase (which was by no means great, but at least got our attention,) and now this. Let’s just say the ending is different than anything else in the movie. It’s like the movie suddenly woke up and came to life, just in time to give us a twist. Unfortunately, it is too little too late. And it’s not especially intelligent or anything, it’s just that for the first time the movie actually decides to take a chance and to something creative. We sure could have used a lot more if that earlier on. This is a bad movie with a decent ending. It’s a movie that really didn’t need to be made and should have stayed on the shelf where it had been sitting since the nineties. Sometimes projects that were written decades ago, and never got made should stay that way. They weren’t great at the time they were written and they certainly aren’t any better now. This is definitely one of those cases.