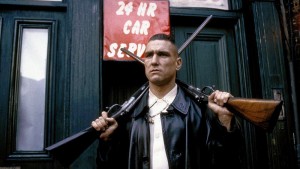 A twisted tale of multiple threads and characters that all comes together as one comedic story of british crime and underworld characters.

Lock, Stock, and Two Smoking Barrels is the first movie that relaunched the british gangster film for a new generation. The days of movies like the long good friday had come and gone, and director guy ritchie decided that it was time to bring them back. The movement that followed has been composed of movies like this, snatch, layer cake, and rock n rolla. There have so far only been two directors associated with the movement, Guy Ritchie, and Matthew Vaughn. And They both got their start with this movie, as Ritchie directed and Vaughn (Layer Cake), produced.

Lock, Stock is a movie that deals with all sorts of seedy underworld characters and that’s exactly what makes it so fascinating. At the start of the movie, we’re thrown in to watch two friends working a scam at selling stolen merchandise on the street. We are immediately attracted to the brownish-yellow filter that the movie has been filmed with, as well as the cutting between real time and slow motion as characters move, like when they run down the stairs and their suitcase opens and all of the contents spill out.

And then we get into the plot. four friends have piled together 25 thousand a piece in order to stake their friend in a high stakes poker game. The game is to be played inside a boxing ring, to avoid any cheating or influence from the outside, and is run by a man named Harry the Hatchet. It is one of the four friends, eddy, who has the talent at this game and so the three others have given him the 100 grand to sit at the table.

So far it’s all routine. We’re impressed by the visual style, and the movie does keep us laughing with the way the friends talk to each other, such as how they keep referring to one of them as the fat man, and he’s clearly not fat at all. But the plot has been ordinary and it continues to be that way for a little while longer. Eddy loses the money at the tournament due to some foul play, and then it gets worse. He allows Harry the Hatchet to stake him for even more money. So now, not only has he lost all the money he had, but he and his friends owe the hatchet even more money by the end of the week. And they have no idea how they’re going to get it. Now this is starting to get interesting.

There’s also the matter of two shotguns (the two smoking barrels) that harry the hatchet has an interest in. he hires some local hoodlums to steal them from the owners. Those two guys do steal them, as well as some other guns. And they mix them up and end up selling the ones the hatchet wanted to eddy and his friends.

There are other characters involved too. For one, there’s chris, played by vinnie jones in his breakout role. Chris is a muscle man who works for the hatchet. He’s sent out to intimidate the boys into making sure they know they need to pay by the end of the week. There’s also a short black guy named rory breaker, who runs a black mafia. When eddy and his friends learn that they will be stealing not only money, but also weed, they get in touch with rory to be their buyer. And he agrees. But rory is also the man who the three pot growers work for. So when the friends are trying to sell the weed to him, they are essentially trying to sell him his own product back.

All of this sounds like it could be confusing, like the big sleep, with an overload of characters. But it turns out to be very easy to follow. Every character looks completely different and that really goes a long way. And it gets to be a lot of fun when the guys who robbed the pot dealers and then were robbed themselves learn who did it to them. And they set up in the apartment of our four friends just as the black mafia is on their way there to do some damage themselves.

It’s a twisted tale of multiple threads and characters, but what makes it so special is that it’s all one story. We’ve seen plenty of movies before where there are all these different characters and stories and they are all somehow connected to each other. Like one character is connected to another and that other character is connected to someone else. It all started with robert altman and movies like short cuts, but by now we’ve seen it a thousand times. Well, Lock, Stock is something different. There are a lot of characters, sure, but they mostly travel in groups, and instead of ten stories that are all connected, this is really one story that a lot of characters get involved in. It makes a huge difference. The movie is elaborate and fun and all the while our four friends are cracking jokes about each other, having a blast. It’s a great movie for the story it tells and way it weaves all of its characters together into that same story. Guy Ritchie has a real challenge on his hands hear and he pulls it off terrifically.