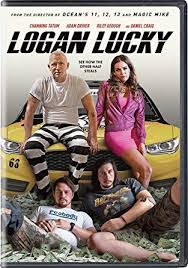 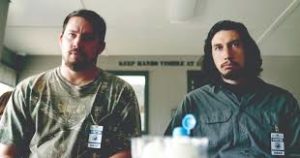 An okay heist movie that is more about the characters, and their souther humor, than it is about the heist.

Here’s a heist movie about pretty dopey southern rednecks who come up with a plan to rob a Nascar racetrack.The story is pretty much routine, including the hero who is a father and cares about his daughter more than anything in the world. And the events that unfold aren’t all that surprising or exciting. On the plus side, Daniel Craig shows up in an unlikely role, doing comedy, as a bomb expert. He’s not all that funny, but it’s still nice to see him trying something different. And the story involving the way he escapes and then gets back into prison, so that nobody notices he was ever missing, is actually the best thing about this movie. But it is certainly not a great film, and that’s a shame considering its director, Steve Soderbergh. This guy has made more heist movies than anyone. With this one, however, it seems like he is just playing in familiar territory.

Logan Lucky is a movie about Southern Red Neck, working class characters who rob a Nascar Racetrack on the day of a big racing event. It’s a heist movie, where the characters doing the heist aren’t exactly the smartest guys in the room. This is a movie made by Steven Soderbergh, the director who has become known for heist comedies, from Out of Sight, (the George Clooney – Jennifer Lopez bank robber movie,) to the three Oceans movies, (Oceans Eleven, Twelve, and Thirteen, all featuring an all star cast.) Soderbergh has certainly been around the block with this kind of material, more than anyone else. But with Logan Lucky, he’s going for something kind of different. This movie is more low key than it is flashy, and features a more moderate cast. It even has somewhat of an indie feel to it.

Soderbergh is, after all, an indie movie director. He broke out with the indie classic Sex, Lies, and Videotape. He hit it big with Out of Sight, Traffic, and the Ocean’s movies, but Soderbergh never forgot his indie roots. And so when it was his time to make an action movie, he gave us Haywire, starring Gina Carano, which felt more like an indie version of a Jason Bourne movie, (highly trained CIA assassin goes rogue to take on her former employers.) When it was time to make his movie about Hollywood, he made it feel like a documentary, (Full Frontal, starring Julie Roberts.) When it was time to make his lawyer movie, (Erin Brokovich,) he made it about pollution and the environment, and about a working class family woman, instead of the mega firm John Grisham movies that most studios were turning out. And when it was time to make his murder mystery, (Bubble,) he did it in a way that got you to sympathize a little bit with the killer, by seeing how sad her life was. So, basically, Soderbergh is extremely unconventional, and only tackles material if he can find a way to approach it that hasn’t been done before.

And that’s what makes Logan Lucky so surprising, at least in terms of it being a Soderbergh movie… it’s not all that unique. This movie feels like it can play in the same sandbox as Oceans 12 or 13, which is to say that Soderbergh seems incredibly comfortable with the material, and the turnout suffers a little because of it. We’ve seen movies about robbing racetracks before, (from Stanley Kubrick’s The Killing to the Getaway,) and we’ve seen all kinds of heist movies before. So what makes this movie so special? That it’s about a bunch of dopey Rednecks who seem to be way out of their league, and yet manage to get everything working out in their favor. But that’s it. And that’s hardly a great tagline or a unique story to tell.

The movie stars Channing Tatum, (long time Soderbergh colleague from movies like Magic Mike and Haywire,) as Jimmy, a down on his luck construction worker, who has just been laid off. Jimmy has an ex-wife and a daughter who lives with her, who he loves more than anything in the world. If this seems like a familiar character and storyline, that’s because it is. We’ve seen so many movies about the dim-witted nice guy who just wants to spend time with his daughter and is willing to do anything to make that happen. In this case, the stakes to explain why this guy is so in dire need of money, are not made a priority. Yes, we know he has just lost his job, but there doesn’t seem to be anything that he needs to buy at this exact moment, where he needs money super fast.

The issue is that the construction company he worked for has been doing a job underneath the motor speedway. And now this construction company is leaving. So if the heist is going to happen by these robbers pretending to be part of the construction company, then it needs to happen now. Jimmy is able to convince his one-armed bar tender brother, Clyde, (Adam Driver,) of this, when he shows Clyde a diorama he made of the speedway and explains how everything works there. Compare this cardboard diorama to the actual replica of the bank vault used by Danny Ocean’s team in Ocean’s Eleven. That might give you an idea why Soderbergh wanted to make this movie. It’s the counter part or scaled down version of what he’s done before. It could even be seen as the parody version. At one point, after the heist is completed, the media even dubs it “Ocean’s Seven-Eleven.”

Once Clyde is on board, the next move is to get an explosives man. And they only know one of those who is any good. Joe Bang, (Daniel Craig,) who is currently serving time in prison. So the issue becomes about getting him out. But its much more than that. Because they don’t just want to bust Joe Bang out, but they want to have him do the job, and then sneak back into prison so that nobody ever knows he was missing, Now this is clever. In fact, it is the best thing about the movie. Everything involving the prison escape and return. It involves a riot in the prison, where the warden doesn’t want to call in any higher authorities because it will make him look bad. The way the prisoners keep things at a stand off, just to buy time for Joe Bang is fantastic. Their demands, including the George RR Martin finish the Game of Thrones book series, are incredibly funny. This part of the movie really works.

But it’s about the only part that is great. People make a big deal about Daniel Craig here, doing comedy, but he’s not especially funny. Sure, it’s something different for him, but that doesn’t mean it’s good. Craig is fine in the role, and the way he underestimates the Logan brothers is kind of fun. For example, he tells them he can’t help because he is incarcerated, and doesn’t realize that they have a plan for that. The plan involves Clyde getting thrown into the same prison as Bang and then helping him escape during a visit to the infirmary.

As far as characters go, there really aren’t many great ones here. And maybe that’s part of why Joe Bang ends up being the most memorable. It’s an A list star taking on a supporting character role, and doing something different with it than he has ever done before. All of that sounds promising, only Craig isn’t especially funny in the part. He’s just okay. To really see Daniel Craig do comedy, there’s the great movie Knives Out, where he plays a bumbling southern detective, trying to solve a case.

The heist itself isn’t anything special. It involves tunnels underground while the racing event is going on above them. There are a couple of close calls with the guys getting busted, but none of them turns out to be anything all that interesting. The best thing that happens during all of this is that Joe Bang improvises a way to make an explosive, and that happens to be kind of funny. But for the most part, as far as climaxes go, this one is nothing great. And that’s pretty much the same thing with the movie. Somewhat fun in the moment, but nothing memorable or unique in any way.

For Steven Soderbergh, and really all the cast members involved, this movie does not mark anything promising on their career timelines. It’s just an okay film. Some of the comedy here works, some of it doesn’t. But even the material that works isn’t especially great. There’s only one worthwhile idea on the table here, the one about Joe Bang having to escape prison and then sneak back in without anyone ever noticing he was gone. And there are some fun moments that come from that sequence, like the prison riot. But the main story here, about the racetrack heist, is pretty familiar territory, and really isn’t all that special, even if it is being told by the director who does heist movies best.