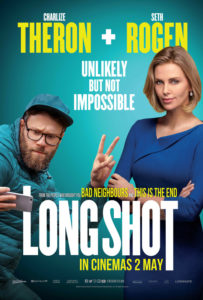 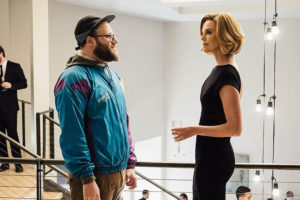 Seth Rogen takes on politics while brining his same, usual level of sexual humor to the mix, and it works!

Surprisingly a pretty good movie, this one doesn’t seem like it would work, with the political comedy element, (generally not the most funny genre,) and the unlikely romantic pairing of its two leads. And yet it does. It works because despite the genre shift, this still manages to feel just like a Seth Rogen movie. He did make The Interview, another political comedy, after all. This one is more serious than that, but it still has time for plenty of sex jokes and a drugs scene. The story itself is just okay, but it’s the comedy that works and makes this movie enjoyable.

Long Shot is a funny movie. It’s the kind of movie that shows off Seth Rogen in a state where he is more mature than usual, but also still being him. Rogen has had other roles where he was more mature and more serious than he is in this film. From Take This Waltz to The Guilt Trip, he’s not always playing the sex and drugs guy. But the sex and drugs guy is who he is. It’s where he’s funniest and where he does his best work. So for a movie yo clean it up just a little bit, (like this one does,) but still get plenty of those kinds of moments in there that show it is holding onto the same sort of humor, it has got to be considered a success.

And that’s what Longshot is. It’s the more mature version of The Interview. That movie was a bromance and this one is a romance. But both definitely work and both are pretty funny. In Longshot, Rogen plays writer Fred Flarsky, a guy who works for a local paper in New York and stands his ground when the paper is bought up by a mogul who Fred’s morals and politics are in strong conflict against. That mogul is Parker Wembley, played by an unrecognizable Andy Serkis who is just wonderful in the villainous role. For Fred, standing his ground means quitting the newspaper even though he has no other job or prospects on the horizon.

Meanwhile, in Washington DC, the president, President Chambers played by the very funny Bob Odenkirk, has decided that he won’t be running again. His Secretary of State, Charlotte Field, played by Charlize Theron, sees an opportunity here. What if she can get the president to endorse her as a candidate for the next president? And so she speaks to him about it, and gets on his radar. This leads to Field starting up a campaign that includes having a team of advisors, (2 of them,) who look at the potential approval rating and public opinion about every decision Field makes.

All of this leads both Field and Flarsky to an upscale charity event party. He’s there because he’s down and out on his luck and his best friend, Lance, (O’Shea Jackson Jr,) is trying to show him a good time. Field is there because she’s a Boyz 2 Men fan, and they are performing at the event. And right away, Flarsky recognizes her from across the room. He tells Lance a story about how Field used to be his babysitter, and he had a crush on her. One night, he tried to kiss her and got an obvious boner. At that moment her boyfriend walked into the room and started laughing at him. It’s one of those childhood traumatic memories that often haunts kids in movies. And it’s very much Seth Rogen humor.

Now, at the party, Field keeps looking at Flarsky and eventually has someone bring him over to her. That’s when she asks how she knows him and he tells her who he is. And while they’re talking, Parker Wembley makes his way over to them and interrupts the conversation to try and setup a meeting with Field. At that point, Flarsky can’t resist the urge to tell Wembley off. And so he does. Right there on the landing, he goes off on a tirade telling the guy why he hates him so much. And then Flarsky takes a drunken fall down the stairs.

The great thing that comes out of all of this is that Flarsky has caught the attention of Field. When she realizes that she needs to enlist the help of a writer to punch up her speeches a little, she has her people call Flarsky. And so he is brought in to meet her, for a business interview. And you would think he’d be ecstatic about taking the job, considering he is currently unemployed, but instead, Flarsky tells her he has to think about it. He agrees with all of her ideas and proposals, but he knows how the game of politics works, and he doesn’t want her to compromise or abandon any of those ideas when the time comes that her higher ups ask her to do so. He wants to work for someone who will stand by her convictions. Field agrees, and they decide to work together.

At this point in the movie, the opposition comes from Field’s advisors, who think Flarsky is a bad choice. Especially Maggie, who despises Flarsky and thinks having him on board will ruin Field’s image. The banter between Flarsky and Maggie is a lot of fun. It includes Rogen’s trademark move of whispering angry things when he is having a fight with someone. And when a terrorist attacked in a foreign country leads to Flarsky and Field getting romantic together, Maggie can’t believe what she is seeing. Earlier on in the movie, Maggie did a PowerPoint demonstration of what the public’s opinion would be of different guys that Field could date. That’s how important she views this decision. And Flarsky wasn’t anything even close to the guys on Maggie’s list.

As the movie goes on, the time does come where Field is faced with push-back and being asked to compromise some of her ideas. It’s exactly what Flarsky saw coming. And when it comes from the president, himself, Field is not sure how to handle it. So she decides to have a wild night with Flarsky, to try to forget about all this madness, and they take molly together and then go out clubbing. Only timing isn’t so good for their crazy night, as an emergent terrorist kidnapping takes place on the same night. Field now has to get on the phone with the terrorists, while in the war room with her call on speaker phone being listened to by everyone in the room, all while being very very high. This is typical Seth Rogen comedy, and not in a good way. Sometimes this kind of scene is funny, like in The Night Before when the characters were hallucinating while at the dinner table with one of their moms. But seeing Field negotiate with a terrorist, while super high, and do so successfully is ridiculous. Especially with nobody else being able to tell that she’s high. Taking it to that level doesn’t work.

In the final portion of the film, another sexual situation plays out in the movie, and this one is pretty great. It involves a video that Flarsky makes by accident, and that Field’s opponents use to blackmail her. The video shows him to be an absolute idiot, but in a really funny way. It’s gross out comedy at its finest. And the joke ends up being the catalyst for the entire third act of the film. All of this works. The ending works. And most of the movie was good. It’s pretty cool that Rogen was able to get his brand of comedy into this movie when he didn’t write or direct it. This movie was directed by one of Rogen’s friends, Jonathan Levine (50 / 50 and The Night Before,) But it wasn’t written by him. Which means Rogen and Levine, both certainly add their own ideas into a script, whether it be by improvising, rewriting, or both.

Long Shot is a movie that is good, but not great. The writing is fun and does a nice job of referencing pop culture, (with plenty of lines about both Game of Thrones and the Avengers.) But despite a ton of likeable elements, there are also some small mistakes. First of all, the obvious reason that people are a little down on this movie, is not addressed enough… the reason is that there is no way Charlize Theron would ever go for Rogen. Then again, he was married to Rose Byrne in two Neighbors movies and had s kid with Katherine Heigl in Knocked Up, and nobody complained. So it’s just that this movie acts like it will be making such a big deal about this, (using it for the title,) and then doesn’t. Aside from that, the political game is only mildly interesting for this kind of movie. It’s smart that the story doesn’t get too complicated with this, but a little more edge in the middle would have gone a long away, (there was certainly plenty of edge in the final act, with the video.) Finally, the romance seems to happen too easily. The terrorist attack happens, they’re sitting there, in a room by themselves, and then boom…they kiss. More development here would have gone a long way.