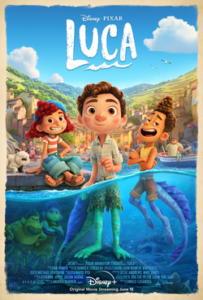 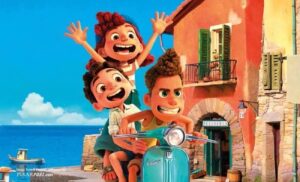 A light-hearted comedy with a very Italian feel and fun, if not especially deep, situation.

This is a fun, feel-good, light and free kind of movie. It’s a movie about two boys spending a summer in Italy. Now, there’s actually a little more to it than that… these boys are actually sea creatures who live underwater and only turn into humans when they set foot on land, but as far as the atmosphere and feelings, it’s Italy in the summertime. And boy does the movie capture that well. The part sea creature, part human story or literal fish out of water situation is right out of the Little Mermaid. The difference here is that it’s not about a curse and falling in love, but instead is about a bike race and making friends. In other words, despite the sea creature element, this one still manages to be somewhat grounded (everything in the town.) The movie is nowhere near as deep as most Pixar films, but that turns out to be a good thing, as this is more of an escapist relaxing and comical experience.

Pixar and Disney have been on a roll over the past year and a half or so. First was Onward, then Soul, and after that Raya and the Last Dragon. All three movies were great. And they were also all kind of deep. Granted the settings of two out of the three of those were fantasy realms, with Onward being about the world of mythical creatures and Raya being about a desolate apocalyptic future,  but even still, they were very smart movies that took their storylines far. Not so much with Pixar’s newest film, Luca. The movie is by no means dopey or anything like that, it’s just that it is more relaxed and laid back. It’s the first Pixar movie in a long time to not really be about anything existential. And that happens to be a welcome sigh of relief.

The movie basically takes the premise of The Little Mermaid and reworks it to not be about romance. So instead of wanting to be a human to marry Prince Eric, like Ariel did in that movie, Luca wants to be on land to have adventures as a human. If he’s in love with anything, it’s with a Vespa – motorized scooter. But Luca does live under the sea, as a “sea monster,” and that’s where the movie begins. It shows us his daily life of herding around smaller fish, like they were sheep. He’s even got the hook staff that sheep herders have and everything. And he is curious about life about the sea and asks his parents.

Like Ariel’s dad, King Triton, in the Little Mermaid, Luca’s parents that the questions down. Especially his mom, who is a bit overbearing. Voiced by Maya Rudolph, she’s the strong authority figure in the movie, whereas Luca’s father (voiced by comedian Jim Gafagan,) is more of a caring, loveable fool. Regarding the powerful mother, Disney has come a long way since their reign in the nineties where every movie featured a strong father and no mother at all. From The Little Mermaid to Aladdin to Beauty and the Beast. It became a trope at one point. But Disney has changed their ways and become more inclusive, and Luca is one of the movies that shows it.

The movie also shows this because of its setting and culture. The movie takes place in Italy. Specifically in either Cinque Terre (Five Towns,) or the Amalfi Coast. Luca spends a summer here, in this small Italian town, and gets to know the locals. He also trains for and then enters a race, along with his friends. And the movie embraces Italian language and culture every step of the way. So most characters speak with Italian accents, and there’s a good amount of Italian language being spoken here in general. The race itself involves eating large plates of pasta. What can be more Italian than that?

Before he gets to the land and the town though, Luca spends the beginning of the movie underwater, doing his thankless herding job, and dreaming about life above the water. He collects objects that are from human culture and have fallen off ships (just like Ariel did.) And all of this is very familiar. It’s nothing new or creative and basically feels like a retread of The Little Mermaid. But then things start to get more interesting. another “fish boy,” shows up wearing a scuba diving tank, helmet, and gear, and he reveals himself to Luca. Then he tells Luca about life above the surface and convinces the boy to come see for himself.

Luca’s traveling up to the surface is pretty great. He has never stepped foot on land or walked around before. And like in Soul, where a jelly like entity learned to take on human form and walk, we get something similar here. The boy who met Luca underwater and becomes his instant best friend is Alberto. He teaches Luca how to stand up “imagine you’re a pile of rocks, and try to stack them up on top of each other,” and then how to walk. And then two of them go up to Alberto’s tree house to talk about the world and look at pictures of Vespas.

Both boys are obsessed with the vehicle and long to be owners of one. In fact, they even make a pretend Vespa (without a motor,) out of boxes and things they can find and try riding it down the side of a hill. But then one night they have an idea… what if they go to the mainland town and try to meet Senor Vespa himself (the fictional character they created in their minds and think must exist and will give them a Vespa of their very own.) This is what I mean when I say the movie is built on very simple and basic ideas. And that’s a welcome change from how deep some of the other Pixar movies have gone. So the boys venture into town and have a number of run ins with the locals.

The most notable of these is with a man named Ercole Viscanti. He’s a bike and Vespa rider and a champion of the races. He’s also a bully and a jerk. Ercole hangs around with two goofball sidekicks who are like henchmen that do his bidding. And of course he treats them like garbage. When Luca kicks a soccer ball that bounces off the side of a wall and hits Ercole’s Vespa, he demands to know who is responsible. When Luca is outed for doing the deed by some local kids, Ercole turns on the boy and lets him have it. That’s when Giulia shows up to save the day. She’s a fun-loving kid who is out to defend under=dogs and misfits. And she has no patience for Ercole. Guilia rescues the boys from Ercole and then takes them home to meet her father.

The father is a big, overbearing man who catches, cuts, and eats fish for a living. Considering that Luca and Alberto are both part fish, that’s a bit of a problem. Especially when the father takes them out on his boat and wants them to earn their money, staying at his house and eating his food, by helping them catch fish. Now this is a bit of a dicey situation. On the one hand, sure Luca and Alberto know everything there is to know about fish, and so they are easily able to help the father catch a bunch, telling him the secret hideout spots fish use. But on the other hand, aren’t they betraying their own kind here? It’s a storyline that doesn’t really feel right or seem to make sense. But it’s the only one like that in the movie, and so we give it a pass.

By now we are at about the halfway point or so, and the movie suddenly becomes about two things… the group of friends training for the big race, and the town’s obsession with catching a sea monster. The race is a triathalon which will involve swimming, biking, and eating pasta. But in order to get to the point where these guys are ready, they will have to train and learn to get good at what each one of them will be doing in the competition. And that’s all while trying to keep their secret about being sea monsters and not getting caught. There’s nothing here too elaborate, and yet it all kind of works. The Italian music that plays throughout the film, as well ad the Italian accents and even use of Italian language all give this movie flavor. Just like how Guardians of the Galaxy proved that Marvel could take a ridiculous concept and make a good movie out of it, Luca proves that Pixar can take a movie with a very simple premise, and make a solid, entertaining, and even refreshing movie out of those ideas.