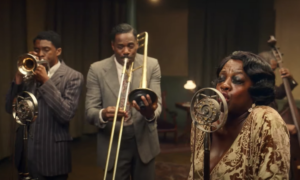 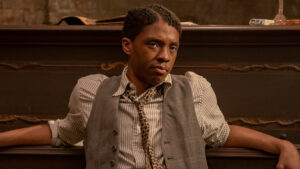 An exceptional film about the members of a band dealing with racist times, and attempts to better themselves, while being met with conflict every step of the way.

Here is one of those movies that takes place all in one location on a single day and allows the audience to spend an afternoon with a band as it works through all sorts of issues. There’s the experienced star, Ma (Viola Davis,) who is in total control and does exactly what she wants, the way she wants to do it, even if that means everyone else at the studio has to wait for her or go along with her wishes. Then there’s Levee (Chadwick Boseman,) the young, up-and-comer who Ma has her eye on. He’s the one who wants something more than this and challenges Ma and her music every step of the way. But the movie isn’t just about these two characters and their tense-filled relationship. It’s also about what each character has been through up until this point, and what stories they have to tell. Boseman gives the performance of his career with this one, really pouring his heart and soul into the character, and delivering. And the single location setting really helps us get to know the layouts of the building and exactly where characters are at all times. This one definitely works.

Ma Rainey’s Black Bottom is a movie based on a play. It’s actually the second movie this year featuring a black cast that is based on a play and takes place almost entirely in one location. The other movie is One Night in Miami, where four iconic figures spend an evening in and around a hotel room. Here in Ma Rainey’s, the characters spend a full day (and that’s another thing, both movies are either one full day or one full night,) in and around a recording studio. What that means is that our characters have scenes in a couple of different rooms, and also outside of the studio. It means the space and possibilities are extremely limited, and so the challenge is definitely set.

Just like in One Night in Miami, these sort of single location movies have the potential to excel in large part because they have boxes themselves into a corner, and the only way to get out of it, is to really give us something powerful. Clearly the limits are disadvantages, however sometimes these movies find a way to tiny that upside down.  Suddenly the challenges to overcome actually become advantages over other films. For example. the single location makes it so that the audience actually gets to know the building and the layout, and even the individual rooms. In One Night in Miami, the characters walk up to the roof at one point, to get a look over the layout of the place. In Ma Rainey’s, there is a recurring conversation about a door that may or may not have been there in the past, and that  won’t open. The movie’s protagonist, Levee (Chadwick Boseman , who gives an off-the-charts performance here,) insists the door was never there and is determined to see what’s on the other side. Is there a secret room? Clearly the door is symbolic of him not letting barriers hold him back, and trying to break through them, not content to stay in one place or be settled and accepting of the way things are.

The other advantage, (or challenge, depending on how you look at it,) that these movies have over others, is that because they exist in just one location, they need to be filled with rich dialogue and conversations. Of course, this is more of a challenge than it is an advantage, but it’s kind of like giving the movie no options. The dialogue makes or breaks the film. Either it’s great, or the movie doesn’t work, no two ways about it. The more limits, the tougher all of this is to pull off. That’s why the Tom Hardy movie Locke, was so exceptional and very much an experiment. That movie took place entirely in a car, during a single car ride, featuring multiple conversations had over speaker-phone.

Ma Rainey’s isn’t in the same ballpark as that one, and neither is One Night in Miami, and that happens to be a very good thing. There’s no question, this movie would not have been as good if it took place entirely in the practice room down in the basement, or in any other single room. Instead, the film limits itself to two or three rooms and then the alley outside and that  gives it just the right amount of space to play  in. We get to know the difference between the upstairs street level – where the music is recorder, and the downstairs basement – the underbelly of what’s really going on. Notice that  Ma (the character with all of the power in this movie,) and the white men (the studio owner and the manager,) rarely set foot inside the basement. When they do, it’s just to pass on a quick message and then head back up again. That’s because the basement represents societal status.

The movie starts in the deep South as black adults run through the pitch black woods at night, whispering. The assumption is obviously that they are being chased by someone. And it’s wrong. The truth is, they are being so sneaky and quiet because they are hiding a secret… that Ma is performing in a circus tent in the middle of the woods. We go into the tent, which is well-lit and packed by rough audience members. And that’s where Ma signs her first song. Then we cut to a theater with her name on the marquis outside, and see her performing on stage. This time it’s not being hidden anymore. This time, she’s got a full bend playing up there with her. This established  how Ma started out, and then how she rose up in success. During that big performance of hers with the bend, we meet Levee for the first time, as he pleats the trumpet and steals Ma’s spotlight for a moment. Ma isn’t exactly happy about it, and calls to the spotlight man to remind him whose show it is. Already, the tension between these two characters is set.

And then we move into the present day, as we see the band walking down the streets of Chicago, making their way to the studio. Not Levee, not Ma, but the rest of the band. In fact, Levee and Ma both don’t show up for quite a while, and a number of characters keep coming down to the basement, where the band members are practicing, asking for them. It’s the studio head and the manager who keep asking, and they ask for Levee and Ma separately. “Where’s Ma? How bout the trumpet player?” All of this helps add to the official introductions of those characters (consider the on-stage scenes from the start of the film like a sneak peak.) Now, it’s like each of our two leads gets their own separate entrance into the movie, and all of this is proceeded by characters asking for them, building the anticipation from the audience to actually get to see these two all-stars, when they arrive.

Levee shows up first. He’s got a brand new pair of shoes, and right away the banter flies. First there’s a discussion about the door, which turns into one about the air and molecules. The content here isn’t all that interesting, but the way the characters use any moment they can find to give each other a hard time is pretty funny. Pretty soon the conversations get taken up a notch. There are debates about which version of a song to use… Ma’s version or Levee’s new version. There’s also a story about a man who sold his soul to the devil, that leads to Levee talking about how he’s always had bad luck, and is totally fine with that. This is a solid hour and a half movie, and by the time the first thirty minutes come to an end, Ma is just arriving at the studio. That makes the end of the first third, or act one of a three act movie.

Ma doesn’t just show up quietly either. Just to get her through the door is a whole big process involving a car accident outside and her intimidating the white police officer who is trying to control the scene. When Ma gets into the studio, things don’t exactly settle down. First she needs a fan. Then she needs the studio people to get her car fixed. She refuses to play Levee’s version of the song. And when she finds out that they don’t have any bottles of coke for her, she stops everyone dead in their tracks and sends two of the band members to the store to get some.

Ma has all of the power in this movie, and she uses it to not only make simple demands like the coke, but also to get her nephew, Sylvester, a prominent part in the performance. He becomes their announcer. The only problem is he can’t speak without stuttering, and Ma demands that they record the song again and again until Sylvester gets it right. She’s not doing it to embarrass Sylvester, but more to show everyone that she is control and will get her way, whether they like it or not. Meanwhile, Levee has some of the best monologues in the movie when he’s downstairs in the practice room with the other band members. During one scene, he tells the story of what happened to his parents, and how he is proud of his father, for handling “the white man,” in a certain way, that taught Levee not to be spooked.

There’s a funny little montage of how many tries it takes Sylvester to get it right, and then the recording. Only there’s a problem, and the song needs to be recorded again. This brings us into the final third of the movie. That’s where things really get taken up a notch. Levee, in particular, has three incredible scenes. First with the guys downstairs, where he turns on a band member named Cutler, and then on god. After that, Levee and Ma finally have it out. The movie has been building to this, bubbling up under the surface, and we finally get it. But even after that climactic scene, there’s still more, including some final moments in Levee’s story that are pretty unforgettable. This is an incredibly dramatic and powerful film. Talk about good writing and great performances, this one keeps building in intensity until it all comes to a sort of explosion. What a movie.