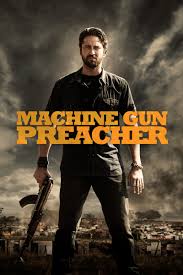 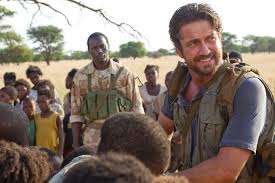 It wants to be Blood Diamond meets The Hurt Locker, and has a pretty cool anti-hero for a protagonist, but even still, the pieces don’t quite fit together the right way.

This is an interesting movie that just doesn’t have what it takes it keep us focused the whole way through. it’s one of those movies where the first half is far superior to the second. that first half gives us a hell of an anti-hero, as Sam (Gerard Butler), is released from prison, goes home to his family, and treats them terribly. this is a bad guy, and he gets into drugs and crime right away. but then he changes over into a different kind of person, heads to Africa, and we suddenly get a whole new world. that’s okay for a little while, but it never gets exciting enough. now there are a lot of action scenes, but they aren’t filmed very clearly, and that’s a problem. there was definitely something missing from the Africa scenes, and the movie needed something to make them more gripping.

Machine Gun Preacher should have been better than it actually is. the pieces were there, and for a good while they were all being handled correctly. at least at the start of the film. this is the movie about a guy who gets out of prison and is a complete jerk, treating his wife poorly, robbing strangers for drugs, and driving while under the influence. he’s a mess and one of the biggest anti-heroes of all time. that’s the kind of character who is incredibly interesting to follow. we wonder how in the world this guy will change and become a hero, and certainly hope that it’s not done in a corny or clichéd kind of way, where he doesn’t even seem to be the same person as at the start of the film. we know he will redeem himself, and we know it will involve helping children in Africa, but the question is how does he get from Point a to Point b when they are so far apart.

luckily the corny Potential this movie has doesn’t really happen. sure the Gerard Butler character, Sam Childers, changes during the course of the movie. he goes from not wanting to help anyone, to basically wanting to help the world. but he’s still a scum bag deep down inside, who doesn’t know how to handle his anger issues and not isolate people who care about him. by the end of the movie, he is turning his best friend away in a pretty horrific way, showing that Sam really hasn’t changed all that much from how he was earlier on. as much as we hate the character, you have to appreciate the realism of the situation.

going back to the early scenes of the film, we really see that this guy is unlikeable. he gets home from prison and right away starts giving his wife a hard time. this is Lynn Childers, played by Michele Monahan, and Sam doesn’t like that she stopped being a stripper and is now working somewhere else. we never really learn the reasons he has a problem with this, but one can infer from the conversation that the guy who owns the strip club is a buddy of Sam’s and that Sam wants his wife working for this guy, at a place where he knows and trusts the owner.

Sam and his best friend, Donnie (Michael Shannon), start shooting up heroin together and doing robberies in order to support their habit. they do drugs in the car and seem to have no boundaries until one night, they pick up a hitchhiker and Sam ends up killing the man. how he isn’t found out and arrested, I have no idea, considering they just dumped the body on the side of the road and Sam’s fingerprints and DNA had to be all over it. but if one doesn’t nitpick and just goes with the movie, than it is acceptable that this murder would be the event that leads Sam to change.

Sam asks his wife to help him and she does by bringing him to church and giving him guidance to find religion. one day at the church a pastor from Africa comes and speaks to them. Sam goes home and decides that he wants to go to Africa himself and to build an orphanage there. he also decides that he wants to build a church, here, in his town. if this movie wasn’t based on a true story, I’d have a hard time believing that he could undertake both projects at the same time. but he does, and before you know it, Sam is off on his way to Africa to make a difference.

The problem with all of this is that there really isn’t enough of a path laid out for what would drive same to take on this quest. we understand that he feels terrible about the murder and wants to change, and that’s enough to believe he would start going to church, but we need more about what led him to Africa. for example, Sam never speaks with the preacher, and we don’t know if Sam has ever even been overseas. sure, he is a construction worker and can build the orphanage, but why Africa? there needs to be more of a push. and even when he gets there, and has done all this, the preacher who came from there never comes to see Sam and check out what he has done.

Instead, of painting a clear picture of what would lead Sam to Africa, this director, marc Foster, is much more interested in getting us there as quickly as Possible and showing us all of the horrors. there’s a lot of violence there with people mutilating each other for no reason at all, and I do like that Sam doesn’t start out right in the middle of it all. at least the movie takes a little time getting him there, starting him off in a more peaceful, touristy area, and watching the shock on people’s faces when he tells them he wants to take a trip to the worst parts of Africa and see what is really going on.

Once Sam gets to the trouble areas and decides to build his orphanage there, he starts running into problems. this is where the rebels come and attack and we get a number of action scenes. that’s exactly what a movie like this needed, only the way they are handled, none of them are very clear. whether it’s not showing us the enemy or not showing us where different characters are positioned in an action scene, Foster handles nearly every one of them poorly. There’s one with Sam showing up with a bazooka at night, and another with Sam hiding behind a rock, like on a stakeout. this is the scene that reminded me most of hurt locker, when the characters were with Ralph Fiennes in the desert, looking through the sight of their sniper rifles at a small building in the distance. the difference between this and hurt locker, however, is that in The Hurt Locker you knew where everyone was. you got a real feel for the layout of the surroundings and exactly what was happening. machine gun preacher never gives us that.

While the movie does a nice job in it’s first half with presenting a pretty bad guy as the lead and all the trouble he gets into, it starts to drop the ball as soon as he gets to Africa. while the things that we do see there are interesting, there seems to be a lot missing. the things that might help us relate to him, like watching him eat and deal with the unusual food they have there, are nowhere to be found. some of the Africa scenes work, but many of them don’t.

The most interesting thing that happens in the second half of this movie is what ends up happening to Sam’s friend, Donnie. that whole situation takes place back home, in the states. considering how much of the movie took place in Africa, there needed to be something more over there. if his wife couldn’t go to visit, than maybe he needed to have the temptation to get with another woman. whether he gave in or not, it needed to be there. he had a best friend in the states, but in Africa, his best friend, (a military man, who was provided for security), barely spoke. the movie is entertaining, but it’s definitely not great.