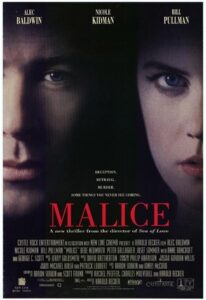 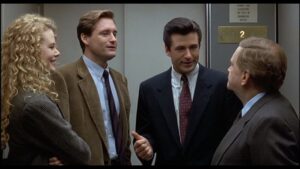 This is a mystery that is so smart it completely throws you for a curve in terms of where it’s going, by the team it reaches the second half. And it’s not that there aren’t clues, or that this becomes a different movie or anything like that. It’s just that you never see this one coming. Movies are supposed to be unpredictable, but in this day and age where every concept has been done a thousand times before, that’s incredibly difficult. Especially with a movie like this that exists in a genre that we’ve seen again and again (film noir.) But Makice does it. This movie uses a serial killer storyline to get us deep into the plot of these characters and all that is going on with them, including lies and betrayal. It’s a fascinating film.

Malice is a unique movie. It’s a film noir that doesn’t really play by the rules of a film noir. In fact, the real focus of the movie doesn’t even come out in a way that it is clear to the audience until about the halfway point. That means the first half of the film is all setup, which is pretty ingenious. Especially when you consider that this movie uses a storyline about a serial murderer and rapist as background material just to throw us off the scent of what’s really happening. Never before has a storyline like that, which clearly would be the main story in most films, been used just for setup, to get the characters of the main story where they need to be, and to give clues that will later lead to an even bigger picture. This is pretty smart material.

The movie was written by Aaron Sorkin (A Few Good Men,) and Scott Frank, (Out of Sight.) That’s a killer combination right there, especially with Sorkin being one of the greatest screenwriters around, (what he did with the Social Network was pretty amazing.) And their talent shows here, with characters delivering stellar monologues and seducing us, even when they are barely trying. In particular, we are talking about the Alec Baldwin and the Nicole Kidman characters. Jed ands Tracey. Jed is a top surgeon who has just transferred to a new hospital in Boston. Tracey is the wife of a man who knew Jed when they were younger and in high school. That man is Andy, the dean at a local all-girls university.

The movie opens with the murder of one of the students. The credits roll as we follow the student home, leaving the campus, getting on her bicycle, and then riding through town. She eventually makes it home and wander in to feed her cat, before being snatched up by the killer. From here, we cut to an ambulance and police car driving frantically at night, sirens blaring, to the hospital, where we watch a surgical team operate on the girl. This is where we meet Jed for the first time. All of the doctors assisting him questions what he is doing. Especially one man, who tells the team that they are going to lose the patient. But Jed sticks with his gut and tries something risky and it works. The girl makes a full recovery, and Jed is a hero. He then confronts the man who claimed they were going to lose the patient, in the locker room, threatening what he will do if this doctor ever makes a comment like this again. It’s a great introduction to Jed’s character, establishing his confidence, arrogance, and his masculinity.

Jed and Andy meet when Andy goes in to see him and ask about the patient. This seems a little odd, since Andy is not a family member, but his role as Dean at the school is clearly to look out for these kids and get involved in their lives in any way that will help them. He is concerned for them, and most certainly oversteps his boundaries, as seen later on when he actually shows up to a student’s house. But for now, we get the introduction where these two characters meet each other and learn that they actually knew each other in high school. Kind of. Jed was a football star and Mr Popular, and Andy idolized him, even when Jed had no idea who Andy was. All of this is established in the movie very early on, and with minimal effort.

Tracey volunteers at a children’s ward in the hospital, and when Andy goes to see her, because he is in the same building, (having just come from visiting the girl he was following up on,) she and Andy get into the elevator to go have lunch. And Andy is telling Tracey all about this doctor who just saved the girl’s life, and how he actually went to school with the man. Then the elevator doors open and Dr. Jed appears. Andy introduces her to Tracey, and then we go home with the couple to learn a little bit about their home life. We learn that they can’t afford plumbing, that Tracey wants them to get a tenant for the third floor, and that Tracey will get a ride home with a woman colleague after work. That night, we see who gives her a ride home and it’s not a woman.

This leads to Andy being somewhat suspicious and jealous of something, and to he and Tracey making up and going at it in their bedroom, despite the little boy in the house next door watching from their window. It’s all relevant to the story. Every detail here counts. The little boy counts. The mention of the man who dropped Tracey off, and how he was a lawyer working on her mom’s estate counts. Every detail is important and that’s one of the reasons why this is such a smart movie. And sure, there are things to poke holes in.. hey, why is a top surgeon coming to live him them, when clearly he has money to afford his own place? But there are also arguments to be made for the other side… in this case, maybe he was just staying with them while he was looking at houses to buy for himself, or maybe he was lonely and wanted to be around people. Who knows. But what we do know is that Jed coming to live with Andy and Tracey is very important and relevant to the story, and what ends up happening.

What ends up happening is that Andy discovers another body of one of the students. There are no coincidences here. He doesn’t just happen to stumble on the body. This is a student (played by a young Gwenyth Paltrow,) who we have seen Andy take a meeting with, and know why he would be going to her house, believing that she is dodging his wake-up call. But he does discover her body and that means the police need to take a sample from him to make sure he is not the killer. That idea is where the plot of the serial killer will intersect with the main storyline later on. Something that comes from him giving a sperm sample. But for now, Andy is considered a suspect (we learn about soil that was on the shoes of two of the victims, that came from Andy’s backyard, and also here plausible reasons for why.) And back at home, Tracey is having massive pain for no clear reason. She goes to see a doctor, a man named Lillianfield, who is about two hours away. Again, everything is relevant here. Everything that seem strange has a good reason. This is not a movie that makes mistakes or throws things in just because.

The serial killer story does wrap up, and a new mystery unfolds right out of it. Before that, however, we get a fantastic settlement scene between Tracey, Jed, and their lawyers. You see, Tracey’s medical problem got out of control one night and Jed was forced to operate on her. Only he had been drinking quite a bit, and didn’t really let that stop him. While on the operating table, we learn a whole bunch of things, including that Tracey was pregnant and that one ovary definitely needs to be taken out, but the other one might also need to be taken. Jed goes out and talks to Andy to get permission. This moment is important for a number of reasons, and one is that it explains to us exactly what is going on, (as Jed explains things to Andy.) If the second ovary is taken, it will mean that Tracey can never have children. But if it’s not taken, then it means that Tracey could possibly die in the middle of the night. So of course Andy tells Jed to take it, and Jed does.

Not long after this, Jed is in the doctor’s lounge and his higher up comes in to explain that Jed just took out a healthy ovary. The hospital is going to get sued. Either that, or they burn the evidence and move on. Jed says he can’t do that. He is responsible and he wants to accept that, as well as the consequences that come with it. If this means he will never work again, then so be it. And so we get a scene where Jed and his residency chief of staff, (this higher up man who came to see him,) go to speak to a lawyer and discuss the case. And then the actual hearing. This movie is very smart to give us the preparation scene with the lawyer, helping the audience to put things in perspective, break down what is happening, and prepare for what is to come. It also adds more weight and gravitas to the hearing scene that follows, with the audience seeing that we needed to prepare for it, and get ready first.

The settlement ends, Tracey leaves Andy, and the real mystery begins. It’s an amazing transition. And where it all leads is pretty fantastic. There are nitpicks to be made, to be sure. As far as mysteries go, and list of suspects, this one could have used a few more male characters to be possible suspects in what follows. There are really only three male characters here, Andy, Jed, and Tracey’s lawyer, played by Peter Gallagher. A few more would have helped. But the way that Andy tries to solve the mystery himself in the second half driving out of town to see certain people and ask the right questions, is fantastic. There are two well-known classic actors who each get one scene here, George C Scott and Anne Bancroft, and both are pretty terrific. In fact, they appear in what are quite possibly the two best scenes in the movie. And they definitely add to the excitement of what is unfolding in front of us. This is one hell of a mystery.