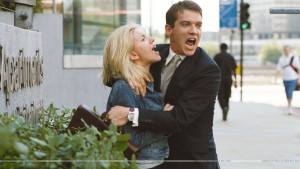 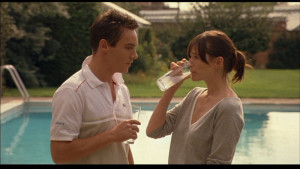 An intense thriller that puts you right in the shoes of the main character and the temptations he faces as well as what he needs to do in order to survive.

Match Point is a brilliantly written, deliciously performed woody allen movie. in fact, it in no way feels like a woody allen movie. it’s the most adult film he’s ever made and certainly the darkest. it’s also the movie that relaunched allen’s career. since his directing and acting career began, woody allen was always making the same kind of picture. every movie he made was a fast-talking, nervous, witty comedy. with this movie, he jumped into a whole new genre, and he needed to leave new york, the place where he made most of his movies, in order to do it.

Match Point takes place in london. it began woody allen’s european movie kick that would go on to include vicky, christina, barcelona, cassandra’s dream, midnight in paris, to rome with love, and whatever he has lined up his sleeve for the future. while many of those films are great, and midnight in paris was exceptional and creative, Match Point, is still probably allen’s best. not his best of all time, but certainly his best of this new reborn european location director woody allen.

the reasons why it is so good is because it tells a very gripping story that makes you completely relate to the main character and understand what he has to deal with. the situation is that chris is a poor young man with tennis skills in london. he used to play pretty seriously, but has since given it up in order to teach lessons to the upper class of london. at the start of the movie, we see chris sitting down for an interview and then accepting the job as instructor. while these scenes might not be relevant to the story that will follow, they establish a little bit about chris and his background, and how he started out slowly making his way into the arena of the upper class.

it isn’t long before chris meets tom (matthew goode, in the movie that brought him to the public’s attention), a wealthy young man with a father who is a business tycoon. chris and tom discuss the opera, and tom ends up inviting chris to come out with his family and sit in their box with them to watch the show. that’s where chris meets chloe (emily mortimer), and the two of them hit it off. chloe likes chris a lot and offers to take him around and show him london. he gladly accepts. at the theater, chris also meets the father of tom and chloe, played by brian cox, as an accepting and warm patriarch. the cast here is pretty stellar, although it needs to be noted that matthew goode and emily mortimer were not big names until after this film. which means allen did a wonderful casting job here.

chris and chloe start spending a lot of time together, and the chemistry between them develops. soon they are sleeping together and starting a relationship. and then chris goes to a party at the families house and meets nola (scarlet johansen). she is absolutely the star of the film. while she had other big films before this, such as lost in translation and in good company, this is the movie that shows just how commanding a presence she really has.

johansen’s character, nola, is the temptress of the film. she’s the one who works away at chris and gets him to feel things he didn’t know he had in him. mainly, a strong and unrelentless sexual desire for her. only there’s a problem. nola is with tom. in fact, she is tom’s fiancé. from the very first moments when chris and nola meet over a ping pong table, and he ends up hitting on her and touching her in an attempt to show her how to hold the paddle, things get pretty steamy.

now this is the heart of the movie. chris’ temptations and desire for nola. and woody allen captures it all perfectly. she really is irresistible, and the kind of girl who would get any guy’s immediate attention. a lot of women hate this movie, and i completely understand. they can’t relate. and even if they can, they don’t want to believe it. now, i’m not saying any guy would do what chris does here and would even consider having an affair with nola, but any straight guy in his right mind would at least feel the attraction. and that’s what allen has to capture.

it helps that jonathan rhy meyers, who plays chris, is so dark and manipulative as an actor. he hasn’t had the best film career, although with movies, he was the star of the showtime tv show the tudors. here, in Match Point, however, he is given his best role to date. and he absolutely knocks it out of the park. meyers plays chris as a guy who is narcissistic and unafraid of taking risks. he is sneaky and a liar and willing to throw it all on the line just to please his own ego. it’s a wonderful character.

most movies have a main character who is likable. not this one. and yet, we still relate to him and have a hard time with the situation he gets locked into. he does have an affair with nola, and they have one moment in a cornfield during a rainstorm that is extremely powerful. the setup, of chris seeing nola through the window, walking outside in the rain, and then following her through a garden, is pretty great. and it ends up being an incredibly memorable scene.

the third part of the movie becomes the film’s darkest hour as it delves into the genre of crime. it’s a way to keep the intensity of the movie building and to follow the story to where things might end up if not controlled until now. chris finds himself having to spin more lies and deception just to juggle all the balls he’s got in the air at the same time, and it becomes a challenging game. the movie has a lot of fun with all of this. aside from it’s intriguing plot and well-written characters, the movie also has an artistic edge to it that includes museums, opera music in the background, and doing business from inside that london building that looks like a giant egg. this is an absolutely fantastic movie, and it showed the world exactly what allen was capable of as a filmmaker who was ready to take his career in a new direction.