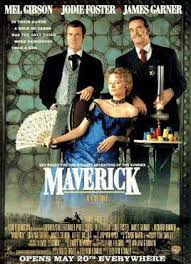 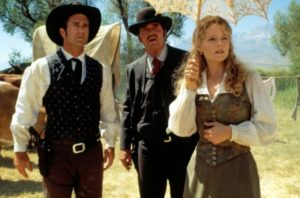 A pretty lousy movie with a simple and straight forward plot, and some very corny humor.

This is a nineties attempt at making a western comedy in the old fashioned cowboy way. City Slickers did it only two years earlier, but the fundamental difference there was that City Slickers was set in present day times, with the protagonists simply going out to a ranch. Maverick is literally about cowboys and gun slingers and gamblers. And it doesn’t work. The main reason for that is because the comedy doesn’t hold up. The plot isn’t exactly great either, with there being a very simple mission and some roads that lead to accomplishing it, while others are simply a diversion or waste of time. But this movie is not meant to be heavy on plot. It’s meant to be a comedy, and as such the humor needed to be way better. What we get here is an older person’s sense of humor, with old fashioned jokes that don’t amount to a whole lot. The movie is okay, but it’s not very funny or exciting, and only somewhat interesting.

Maverick is a movie that is way out of its time. It’s a movie that just doesn’t work today, the way it did when it came out. That time was the nineties. This is a western comedy, and that genre is so dead that you can’t even watch a movie from that time without it feeling corny. At least not one like this. There were a few others made around then, from City Slickers to Shanghai Noon (that one came a little later.) And Maverick is by far the worst of the bunch. It’s an older person’s movie. Consider that James Garner and James Coburn are two of the stars. And that really doesn’t mean anything, as both of those actors have made plenty of great movies that still hold up today. But in terms of humor, this movie just doesn’t have it.

And that’s really what it comes down to. The jokes aren’t very funny. And the story is nothing great at all. This is a Richard Donner movie. Donner is the director behind the first two Superman movies and also the Lethal Weapon series, (there’s a fun joke about that here, including a cameo.) But Donner, like Gibson, is an actor from another time, and that time would be the eighties and nineties. Gibson fell out hard with audiences after his racist rants and bad behavior, and he never really recovered. Seeing him as a likable leading man star is a a little tough to watch. Especially when he is so unfunny. It’s amazing that this movie was once considered likable and good, when it clearly does not hold up at all.

The movie opens with Brett Maverick, (Gibson,) in the desert, hanging from a rope that is tied to a tree branch. He sits on a horse and there’s a rattle snake crawling around the ground underneath them. So the idea is that the snake will make the horse run off and Maverick will be hung. That’s a pretty big domino effect for the bad guys who put Maverick in this situation to be counting on. But we’ll come back to this scene later. At the beginning, it’s just to get us interested in the movie, as a quick flash forward of what is to come later on. The real opening starts with Brett riding into town on a donkey, and his voice over narration telling us what’s going on. Even this voice over seems out of place, and feels like it’s from the black and white gumshoe days, or even the Naked Gun movies. And the music does this movie no favors, making everything seem uplifting and old-times, as opposed to compelling or dangerous.

So Brett rides into town and sits down for a card game. He promises the men at the table that he will lose for an hour straight and he does. And we get that while he is losing for an hour, he is learning the tells of the different people at the table. That idea is kind of interesting. But then when the hour is up, Brett starts winning and gets into trouble with the men he is taking money from. Truth be told, this opening card game sequence is probably the best scene in the entire movie. Nothing about it is great, but at least the humor is slightly entertaining. For example, Brett has a lot of fun with a gun fighter who he beats in a hand of cards. He pulls his gun on the gunfighter, then does it again and again. At one point he throws his gun into the air, saying, “damn thing won’t stay in its holster.” This is meant to be slapstick, physical comedy. It certainly isn’t smart comedy, and the reality is, the gun fighter would probably have shot him dead a long time ago, but we go with it.

Eventually Brett gets the anger of some of the other guys at the table too, including a man names Angel, who is ready to kill him. Only just then a bunch of men break in, looking for Brett and drag him outside. A fight ensues, right in the middle of the street with everyone watching. And Brett wins. He gives all the men in the fight a beating, and when he returns to the card game, nobody has a problem with him taking their money. And so Brett goes off with his winnings. He is staying overnight at the saloon, which is also a sort of hotel, and so he has some run ins with a woman who was playing at the table, Annabelle Bransford. She tries to seduce Brett, but is really only after his wallet. And he knows it too. She doesn’t get away with his money, and instead, ends up with a shirt of his that he wants her to clean for him. Talk about sexism. He literally says something like, “you must know how to clean this.” And I get that sexism did exist in those days, and all that, but there’s no point of this line or situation, whatsoever, other than the unfunny joke that happens when she shrinks the shirt.

The next morning, Brett goes into town to see a banker friend who owes him some money. And the man doesn’t have it, or at least claims not to, until the bank gets robbed. Then he turns over a ton of money that he was holding onto. The point of all of this is to show us that Brett has a tournament he’s trying to get to, and needs a large sum of money to make it there. The movie now has a mission and a goal and a point. It now has a story, basic as it may be. And pretty much the rest of the movie is about him trying to get enough money to make it into the tournament. Now, that would be fine,  if little by little he was actually putting together a sum of money. But most of the things we does for money don’t work out at all. I suppose that could be considered funny, but really it just feels like a waste of time. Like the movie is trying to kill time before he gets to the tournament for the climax, so it has him go on these pointless adventures./

One of these comes when he, Annabelle, and an older man they are riding in a stagecoach with, Marshal Zane Cooper (Garner,) come across a group of women who have been robbed. The robbers were either Indians or dressed up like Indians, and they stole all of the money, which turns out to be a pretty large amount. So Maverick, Cooper, and Annabelle go after this group with the promise of getting ten percent of the money they recover, from these women. Turns out the robbers weren’t Indians at all, but a bunch of drunks who dressed up like Indiana. It isn’t hard to get the money away from them. But when he returns it to the women, Maverick decides to give them all of it. Which means the whole situation was basically a waste of time and didn’t advance the story at all.

Similarly, when a real Native American tribe shows up, Maverick tells the Chief and leader of the tribe to kidnap him and take him with them. It turns out this is an old friend of his, but considering there is no money in going with them, what was the point? Maybe if Maverick had used this as. way to get the people he was with, like Cooper, to pay to get Maverick back, and then Maverick split the money with the Indian Chief, Joseph, (Graham Greene,) it would have made sense. But what it does lead to is a brief subplot about a French wealthy man hunting Indians for sport, and for a lot of money. Finally Maverick gets to start collecting.

All of this leads to the river cruise on a steam boat, which is where the Poker tournament will be held. We meet a new character just in time for the climax. This is the Commodore, played by James Coburn. And we get some rules about the game… mainly that anybody caught cheating will be thrown overboard, Then the game playing begins and we see person after person caught cheating and thrown off the ship… literarily. Other than the card game scene at the start of the film, the riverboat climax is the other decent part of this movie. It’s just kind of fun to watch an overnight tournament that includes a break of going back to the rooms, and the idea that the players need to be back at the table by a certain time or else they forfeit. Even watching the different hands and ways each of the main players is eliminated is kind of fun.

At the end of the day, Maverick doesn’t really work because it isn’t funny enough. The story is simple, but fine. That’a not really the problem. The problem is that there’s no reason to care or get invested in this one. None of the characters are very compelling or interesting and the jokes mostly land pretty flat. The only time Maverick really taunts a character is in the beginning with that first card game, which is what makes that game kind of fun. And the last card game, with the overnight rules and individual hands we get to see played out, works as well. But that’s about it. For the most part, this movie is just fluff. It’s filler in order to get from the beginning to the end, and they don’t even attempt to dress it up, so that we can’t tell. They just hope the jokes work and that Gibson is charismatic enough to carry this whole thing on his shoulders. Well they don’t and he’s not, and the movie certainly doesn’t hold up. Yes, this movie did work back in the nineties when it came out, but it sure hasn’t aged well at all.