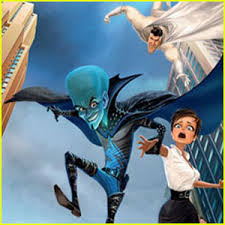 A very smart, very funny movie with perfect comic timing, and even a clever and somewhat unpredictable plot.

Megamind is a very lively, creative, and entertaining cg animated movie. it’s about superheroes and crazy super villains, and has the feel of an action movie. the last time anything like this was tried was with the incredibles, which basically spoofed the superhero genre with a documentary-like beginning and then lots of talk about hiding secret identities and not using your powers in the house or at school. megamind is totally different. it’s not about superheroes in the real world, but about superheroes and villains battling each other.

the movie opens with the voice-over narration of megamind (voiced by will ferrell) as he falls to what he believes to be his death. right away there’s something unique going on, which is that the movie is being told from the point of view of the villain. megamind is indeed the main character of the movie, and is more of a funny villain than an evil one. as ferrell’s voice tells us the story of how he got into this jam up, he starts at the beginning. the very beginning. we are suddenly with baby megamind as he is sent off to another planet by his parents when he is only eight days old.

the planet is earth, and on his way there he crosses paths with metroman (brad pitt) who is also a baby in a spaceship headed for earth. metroman ends up in a nice home while megamind ends up crash landing in a prison to be raised by convicted felons. but the introduction montage doesn’t stop here. megamind continues to tell of how he kept crossing paths with metroman when the two of them were youngsters in school together. and he tells of how one day he came to a realization. if he was going to be the villain then he would be the baddest villain there ever was and have fun with it.

this leads us into our first song, bad to the bone, played with the loud and exciting beats of the song’s introduction. the movie ends this opening montage shortly after this, but the music keeps on rolling throughout the picture. and it’s always something loud and catchy. there are two ac/dc songs here, highway to hell and back in black. there’s also crazy train by black sabbath, welcome to the jungle by guns n roses, and bad by michael jackson. it’s a killer soundtrack of ferocious heavy metal hits. and the music certainly propels the movie. especially since every one of the songs on this soundtrack starts off with a powerful and recognizable beat, long before we get to the chorus or even the opening lyrics.

the movie is about a bad guy realizing that once the good guy is out of the picture, being bad just isn’t as much fun anymore. after that lengthy and fun montage about megamind and metroman growing up together, we get the big and exciting real opening scene of the movie. the same way that the bond movies open with an action sequence, what comes now is this movie’s version of that. megamind has kidnapped the local news reporter and metroman is out to save her.

megamind holds the reporter (voice by tina fey) hostage in a observatory tower and the two of them have some funny interactions with each other. she’s apparently been through this a hundred times. she even asks if her frequent kidnapping card can be punched. the reporter knows all the stops that megamind is about to pull out and even calls them right as he’s doing them. an alligator pit, a bunch of saws that come down from the ceiling, and more. none of it’s scary to her.

metroman does end up showing his face to come and save her, but at the end of the scene he is no longer around. and now megamind rules the city. he takes over, destroying the place, and then realizes that he needs a hero to have great, epic battles against. with no one to stop him, there’s no longer a challenge. there’s no longer a reason to try to think up cool and terrible ideas, like a giant robot suit he calls the black mamba.

megamind has a sidekick, called minion (ironically the same name as was given to all those little yellow guys in despicable me, which came out the same year as this film did). minion (voiced by david cross) is a fish who rolls around in his fishbowl which is placed on the head of a robotic body. so this fish basically controls the whole body. and he’s a fun sidekick, always having his master’s back. i love when he labels the secret door in big letters that say exactly what it is and then tells megamind, “i kept forgetting where it was.”

aside from david cross and tina fey and will ferrell, this movie also has jonah hill as the heavy, dorky guy who wishes he could get the girl. he’s a reject camera man and hill plays him with the exact same voice and mannerisms as his character from superbad (just without all the sex talk and cursing of course). still, the character is pure jonah hill. just listen to him try to invite tina fey’s reporter over for a party at his house.

The movie works for two reasons. the first is that the plot about a bad guy learning to be good is pretty fun. it was the same plot used in despicable me, with steve carrell’s gru getting one over by some cute kids. it’s a little different here. this movie, more than that, is absolutely meant to be an action film. the superheroes fly around and whallop each other in the sky. despicable me was also about villains, but they were more nerdy inventors than superheroes. the other reason why megamind works so well is the casting. will ferrell and jonah hill in particular are just perfect, and they go all out here. tina fey is good too, and brad pitt is in the movie much less than one might be led to believe, and that turns out to be okay. he doesn’t have the same presence as the other stars (funny, since he is the biggest movie star of the bunch), because they are all comedians. even david cross is a comedy man. the movie is very funny and exciting. the plot does end up getting pretty simple in the end (the bad guy is always the new kid in town, younger than our hero, just like in despicable me, just like in the incredibles), but that’s okay. the movie still knows how to deliver lots of laughs.