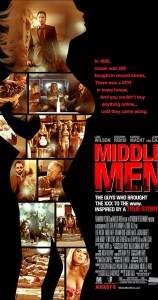 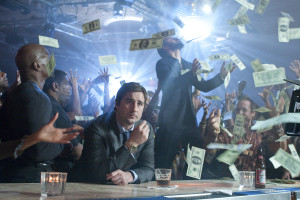 It’s Boogie Nights meets Goodfellas meets blow, and while it might drag a little in it’s first half, the second half more than makes up for it.

Middle Men is a pretty good movie. for one thing, it’s premise, which is somewhat based on real life events, is incredibly interesting. it’s the story of how internet porn became a business. it’s about the guys who invented a way for someone who is anywhere in the world, to enter his credit card information over the internet and receive a service, without ever coming into contact with the people he is buying it from. whenever you think of items that are purchased online, such as at amazon.com, the way that was done comes back to the events in this movie.

so there’s a good idea that the characters in this film had, but that doesn’t necessarily make for a good film. i mean, since when does hearing about an idea translate to something worth watching on the screen? that’s where the story comes in about these two guys, buck and wayne, who had this idea and didn’t know how to keep everyone involved happy. the movie is as much about luke wilson’s character, jack, as it is about buck and wayne’s idea, and that’s a large part of why the story is worthwhile.

luke wilson is absolutely the kind of actor this movie needed in the title role. he delivers voice over narration throughout the movie in much the same way ray liotta did in goodfellas. that means he’s not just commenting on what’s happening, but also on the people who are doing it. and he has a lot to say about the idiots in his industry who can’t be trusted and who try to go behind each other’s back before they even really know what’s going on.

we meet jack as he is explaining what he does for a living. he’s the kind of guy who helps other guys sort out their problems and their differences. in a lot of ways, what he helps people do seems like common sense. for example, at the start of the film, we see a guy who can’t pay off some bookies (robert foster gets a nice, brief appearance here), and so the bookies are going to break the guy’s hand. well, jack goes over to the guy who can’t pay and asks him what he would need to be able to get the money. the guy tells him he needs a certain license and that if he gets it, he can also get the money that day. jack knows that the bookie has connections to the licensing board. so he gets the bookie to get the other guy the license and the other guy gets the money for the bookie. everybody’s happy. it’s a little too neat, but the movie handles it well. for example, it doesn’t just show everyone agree to go along with this. jack has to twist people’s arms, shut them up when they are talking too much, and make the pieces fit.

we move from jack’s story to that of buck and wayne. these two numb skulls both have jobs and are both somewhat smart guys, but they don’t know how to function in society. buck, for instance, works at nasa and is a terrific rocket engineer, but he loves drugs way too much. he takes drugs, then eats tons of chocolate and than puts himself in a zero gravity simulator. it sounds like fun, but it’s also the kind of thing that gets you fired real quickly. and wayne doesn’t have any better luck with his job, working with pets and ordering drugs for them, either.

but then one day they come up with the internet porn idea, buck write an algorithm that can take people’s credit card information and make it happen, and they are off. they go to a strip club and ask the russian owner if they can take photos of his girls, and he agrees to be their partners. the problem is, buck and wayne don’t know how to share or be honest, or how to be good partners. and that’s where jack comes in. buck and wayne go to jerry, a corrupt lawyer who is under indictment from the fbi, and jerry brings jack on board.

jack is the rational guy of the group. he’s the guy who will sit down and calm people into getting out the answers to his questions and making those answers as simple as possible. this guy is so down to earth that everybody wants to be a part of whatever he’s involved in. it’s a great character here, but with all the complications involving buck and wayne and their partners, it takes a while for things to really get going, once he’s on board. the first half of the movie does move kind of slow. but then something happens.

there’s a murder of sorts that changes everything. from this point on, the movie will be pretty great. jack gets the guys to agree to cut jerry out, simply because jerry is under indictment and you don’t want to have your product associated with someone who is about to be all over the press for illegal activity. after jerry, jack has to deal with the murder and the people who that character was going to report back to. it’s a slippery slope that needs to be handled with great delicacy.

aside from the ramifications of the murder, the second half of the movie also gets much more involved in jack’s personal life. he has another woman, besides his wife, and learns some very dark and disturbing things about that other woman. there’s also a situation with his son and jack having to resort to blackmail to help the boy out. there’s so much going on in the second half that in many ways it feels like a different movie than the first half of the film. there’s even a storyline involving the fbi and terrorists who use one of jacks’s internet porn sites.

middle men is a good movie. it does take some time to get going, but once it crosses that line and hits the right buttons, there is no turning back. the casting of this movie is pretty great and that really propels it along. from luke wilson who is absolutely perfect for this role, to giovani ribisi, james caan, and kevin pollack, it’s not that these are the best actors in the world, it’s just that they are so right for these parts. the movie has a lot of ups and downs, and seems to span a lot of time in the industry, just like boogie nights or any other movie about both rising and falling. and it’s really luke wilson’s narration that makes this movie work more than anything else. he is so strong, as the voice of reason, that once the crazy events start piling up in the second half of the movie, we are glad to have his character to help guide us through them all. middle men is a fun movie. it’s boogie nights meets goodfellas meets blow, and it seems to have taken a lesson from each of those films on how to tell a story like this the right way.