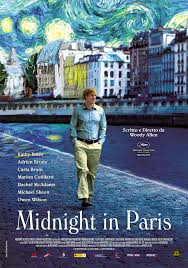 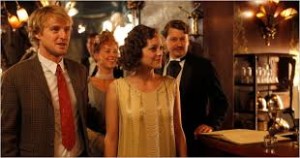 A very creative and wild spirited comedy about living in one time, but wishing it was another.

Midnight In Paris is a movie that is about environment and lifestyle more than anything else. The plot is very different then what the trailers for the movie reveal, and that’s a pleasant surprise. If you don’t want to know it (because apparently we’re not supposed to know it until we’re sitting there in the theater), then read no further. That’s right…spoilers are a coming.

The storyline is about a man who is in Paris for vacation with his fiancé. The man is Gil, (Owen Wilson), a successful Hollywood screenwriter who is now interested in giving that up to become a novelist. His fiancé, Inez, (Rachel McAdams), is hardly supportive. She thinks he should keep doing what he’s doing because it works, and why try to do something new that he will probably fail at. She also doesn’t like how taken aback Gil is with the streets of Paris. He talks about wanting to move there one day and settle down in a quiet and peaceful home where he can work on his future novels. Ines thinks this all pretty ridiculous. The same can be said of the way he talks about how wonderful Paris is in the rain, and she wonders why anyone would want to walk around getting wet.

In the first part of the movie, Gil and Ines travel around with her parents (where Gil makes a very funny remark in front of her father, regarding how he feels about republicans). Then they run into a couple that Ines knows and they start doing couples things with them. They go to a statue garden and then a museum. The man in the other couple is Paul, played by Michael Shen, as an intellectual who seems to think he knows everything about everything. Paul is certainly well read, but his arrogance and resistance to any new information that goes against things he already knows, makes him extremely annoying to Gil. In a wonderfully funny scene at the statue garden, Paul argues with the tour guide about an artist’s mistress and Gil jumps in, taking the tour guide’s side and saying that he read the same thing as what she is saying. He’s doing it just to annoy Paul, but he makes it sound convincing, claiming that he used to think the same thing Paul did, and was surprised to learn the truth. Watching him push Paul’s buttons in a sneaky, back-handed sort of way, without being obvious about it, is very entertaining.

Like Paul, Gil is interested in the past as well, only he wants to live it and experience it instead of just reading about it. He keeps talking about how great it would have been to have lived in Paris in the twenties, and one night when he goes out for a walk by himself, he gets his wish. He’s sitting on an outdoor staircase, lost in his search for the hotel, when an old-fashioned car pulls up. The people inside invite him to join them and he does. Soon they are off to a party where he is sitting across the table from F. Scott Fitzgerald, the author of the great Gatsby. Paul has been transported to the 1920s. Fitzgerald introduces him to Ernest Hemmingway, who talks exactly the same way he writes, in long detailed sentences, packed with feeling and observations.

the movie has now found its essential plot. during the days, Gil returns to the present and spends time with his fiancé and her parents. then at night, he goes back to the stoop and gets a ride into the 1920s where he continues to meet some of the greats from that time, including Pablo Picasso and filmmaker Luis Bunuel. he talks to these people about their perspectives on life, and he even gets his novel passed along so that they will read it for him and critique it. Gil wants Hemmingway to read it. Hemmingway doesn’t read it, but instead passes it along to the woman who he trusts with reading and critiquing his own work.

the more you know about this time, the more you will see in this movie. clearly there are constant little jokes that require some outside knowledge to understand them. I don’t know much, for example, about Salvador Dali or Cole Porter, (apparently Dali is the guy who has those paintings of clocks melting), but I know a little bit about Luis Bunuel. So when Gil talks to him about a plot for a movie and recites the plot to Bunuel’s film, the exterminating angel, if you know what he’s talking about, it’s a lot of fun.

but the movie certainly works without going into it with that outside knowledge. That’s because Owen Wilson is doing some of his most likable acting here, as a simple man with some nice, peaceful ideas about how to enjoy life. the movie explores the theory that every intellectual who studies the past decides that it would have been better to live at an earlier time. there’s always a time period that these people say, “oh, it must have been so amazing to have been alive back then and in this one city.” and maybe it’s true, but as Gil finds out, even people who were alive at that time and in that city, are looking at the past for an earlier time that they wish they were a part of as well.

Clearly Gil and inns are not right for each other, and that’s something that one can tell just from the movie’s trailer. but one thing I like about this movie is that it’s not about Gil falling for another woman while he is in Paris with inns. in that way, it is not like the plot that we see so often in movies like the heartbreak kid or barney’s version. yes, Gil has escapades with other women, but he does not suddenly find the perfect girl and spend the movie with her. instead, he is like a free spirit, just enjoying whatever is put in front of him.

Midnight in Paris is a woody Allen movie, and believe it or not, it is one of his best. at least one of the best movies he’s made in the past ten years or so, and even that’s saying a lot. woody Allen used to be the New York comedy guy. Scorcese was making New York gangster movies, spike lee was making New York hood movies, and Allen was making New York comedies. that was in the seventies and eighties. in the nineties, he lost his touch and started making crap. but then in 2005, he found his way again, and it wasn’t through comedy. that year, he came out with match Point, and it was something uniquely different. it was an artistic crime thriller, dark and disturbing, set in London. putting his movie in another location, besides New York, seemed to free Allen up. he continued the trend, making another great film, Vicky, Christina, Barcelona. now, not all of these international movies he started churning out worked. Cassandra’s dream certainly didn’t. but overall, this was woody Allen reborn, finding a newfound talent. artistic European movies. midnight in Paris fits right in with the new trend.

the movie does feature Allen’s signature lines of dialogue and ways of speaking, such as characters stuttering or saying “you know” in the middle of their sentences, but these traits of Allen’s writing are handled so well by both Owen Wilson and Rachel McAdams (old wedding crashers co-stars), that it is hardly noticeable. every woody Allen movie has a character who speaks like this, from Kenneth Branagh in Celebrity to Rebecca hall in Vicky, Christina, to Larry David in Whatever Works. and usually these actors sound like they are just channeling woody Allen’s own voice and way of speaking, himself. but Owen Wilson finally gets it right. he makes the character his own, and the movie, with its incredibly original and fascinating ideas, is an absolute work of art. I will say that some things get patched up a little too neatly at the very end, but just for it’s creativity and atmosphere alone this movie is a gem.