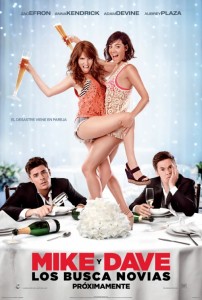 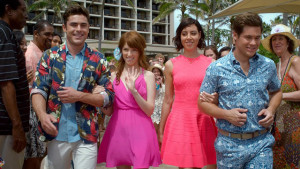 Surprisingly not bad, and a pretty decent movie with a predictable, yet entertaining story to tell.

A very funny movie, this one works because of the actors and their natural comedic abilities more than anything else. Adam Devine in particular is pretty hilarious, and Aubry Plaza, doing her usual dark humor routine, continues to shine. On top the that, the jokes are quick and energetic and never overstay their welcome by repeating themselves. The storyline might be kind of thin, about a destination wedding, and two guys who get tricked into the dates they end up bringing, but all the usual cliches you might expect for the ending fall by the wayside here. This movie is too focussed on making us laugh to care whether or not it crosses all the usual markers of a film in this genre, and that’s a good thing. It helps the movie avoid many of those formulaic plot holes. This is a film with a hard R rating that knows how to make that count, featuring all kinds of sexual discussions and conversations that continue to make us laugh. This might not be the most intelligent film, but it is definitely packed with humor and a lot of fun.

Mike and Dave Need Wedding Dates is actually a pretty funny and entertaining movie. These days we are plum smack in the middle of the R rated comedy boom, and this movie shows that even a simple minded film can be a success if it has the ambition to go all out on the jokes, and break through formulas every once in a while.

Regarding that rated R comedy boom we are in, now a days nearly every comedy (other than movies made solely for kids,) gets that rating. The Saturday Night Live comedies that used to be for teenagers are now being made for adults (Andy Samberg in Pop Star and Tina Fey and Amy Poehler in Sisters.) This is the product of the Judd Apatow train that launched Seth Rogen, Jonah Hill, Jason Segal, and a whole bunch of other, uber talented young stars. One could say it started right before Apatow with the Frat Pack movies (Old School, Wedding Crashers,) but Apatow (40 Year Old Virgin, Knocked Up, Superbad,) launched it into a place where there was no looking back.

Now just because these comedies are rated R  does not necessarily make them good. There are still plenty of traps for movies to fall into, such as becoming predictable and formulaic, or not using the R rating the way it should be used, (for example, only featuring cursing, and no sex, nudity, or even talk of such things.) Mike and Dave Need Wedding Dates cleverly avoids these traps. The characters are likeable and funny to the point where we don’t even care much about the plot, and that’s a good thing for a comedy.

The film is about two brothers (played by Zach Efron and Adam Devine,) who take two girls they meet, (played by Aubry Plaza and Anna Kendrick,) to their sisters wedding. How we get to that point is one of the key plot elements of the movie, and the film uses the perfect amount of time to set it all up. At least a fourth of the movie happens before the characters reach Hawaii for the destination wedding, and this amount of time ends up being exactly right.

Mike and Dave are two jackasses, but not the kind that we roll our eyes at. Instead, they are the kind that we laugh at and find amusing. They aren’t especially stupid, or anything like that, but they are a little too full of themselves and blinded to reality. Such is the case with the opening scene where they sell a number of cases of tequila to a guy who knows they are brothers trying to pull off a scam. This bartender, (played by comedian Marc Maron,) calls them out on the act of pretending to be strangers, and yet he still buys their product, (basically just to get them to shut up.) This is the sort of thing that feeds their egos, but also shows us their determination, ambition, and even charm.

Mike and Dave love to party and their parties usually go from being a great time for everyone to turning into horrible catastrophes. The movie is filled with energy in the first half which comes from lots of music scenes, quick cuts, and montages. It all works. The way this movie shows us the parties being a great time for everyone, and then, only later on down the line, shows us the catastrophe that each party became, works. These guys are great. Adam Devine (Mike,)  in particular knocks it out of the park with this film and steals every scene, but he and Zack Efron play off each other nicely as well.

when their parents and sister propose that they need to bring dates to her wedding, they start setting up Craig’s List adds and going on talk shows. The catch is they are willing to front the bill for the vacation to Hawaii. This brings them to the attention of  Tatiana (Aubry Plaza,) and Alice, (Anna Kendrick,) to wild and crazy sisters without any money. The girls hustle the boys with a stack of lies, (pretending to get run over, and then get saved, pretending to be a school teacher and a hedge fund manager,) and the next thing you know, they are all headed to Hawaii.

Now, not every joke and not every character in this movie works. Of the leads, Devine is great, but so is Aubry Plaza, playing the same kind of smart and mischievous character that she mastered on TVs Parks and Recreation. And what does work is the way that the movie never spends too long on any one joke, and never has the characters hook up, instead always keeping us on our toes, waiting for that first kiss. Even the way that the movie brings in a sort of villain in Cousin Terry, works. She threatens Mike in multiple ways. First, telling him that her speech is going to blow theirs away,  and was helped out by Chris Rock, and secondly by trying to steal away Tatiana. It’s just one more humorous twist or angle this movie has to play.

The storyline does get predictably sappy in its final act. That’s where every character suddenly gets serious. But even that move to slow things down and have each character learn something certainly beats out the usual formula for this type of film, of characters going their separate ways only to get back together and forgive each other. Is there a climactic fight? Sure. But it’s played for laughs as characters deal with the ridiculousness of trying to poison each other. This movie has so much energy and humor going for it, that you can’t help but laugh. And it finds the perfect balance of giving us sexual situations without necessarily having the characters have sex. Impressively nearly all of it works.