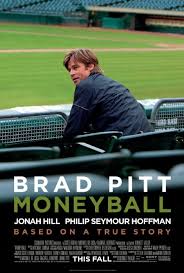 A movie about baseball and the rebel who tried to revolutionize it by throwing out everything that came before him and starting from square one.

This is a fascinating movie. it is hardly the most exciting film, and certainly not for everyone, but for the crowd that appreciates artistic films combined with emotion, Powerhouse performances, and seeing something different, this one hits it just right. the movie is about the general manager of a baseball team who is in a rut. he is losing all of his best players to teams who can pay them more. he’s got no money to replace them. and so he comes up with a formula for how to find new players that can get the job done. all that matters to him is if they get on base. the fielding will come. watching this man, Billy Beanie (Brad Pitt), work his magic and try to convince the world that he knows something the rest of them don’t, is a lot of fun. the movie does move slowly at times, but in a Michael Clayton kind of way, everything is rewarded with where it ends up going.

Moneyball is something incredibly unique. it’s a baseball movie that’s not about the sport, but about the business. it’s about the economics and the numbers and how to use a mathematical formula to predict future outcomes. that doesn’t sound too interesting and it’s kind of a miracle that this movie finds a way to make it work and to make it riveting.

the movie opens with TV. playbacks of a baseball game where the Oakland A’s lost to the New York Yankees. it’s apparent from the sportscaster commentary that we listen to as we watch the footage, that the A’s have done a tremendous job just to get here. they lose the game, and at the end of it, a subtitle comes on the screen that says the payroll of both the Yankees and the as. they aren’t even in the same ballpark. the numbers are meant to be so different that just seeing them is like a punctuation Point or a car bomb explosion that launches us into the film.

we meet Billy beanie (Brad Pitt), sitting in the stands by himself at night, listening to a radio playback of the game. we see close ups of his eyes. is this an artistic movie? it certainly looks like it. it’s the Michael Clayton of 2011, the movie about a rebel who shakes up the industry and goes completely against all of the authority figures who try to stop him because they think he is committing career suicide. there are certain high up people who you don’t take on. certain systems that you don’t mess with. only Billy does, and that becomes the storyline of this movie.

we see Billy sit in a meeting with the owner of the A’s, asking for more money. his star players are leaving the team to go to other big market teams that are going to pay them a lot more money. his team, that he put together out of oblivion, is being gutted right in front of him, and when he asks for more money just to be able to compete, he is shot down. Billy tries to insist, but the owner won’t hear it, and abruptly changes the topic with a “what else can I help you with?”

Billy goes to Cleveland to try to work out a trading deal with the Indians team for one of their players. he sits in a meeting with the general manager of the Indians, only there are about five guys sitting behind him. and the general manager keeps looking either at those guys or at the two guys standing in the doorway, trying to get their feedback. bean is clueless as to what’s going on here. he wants to do a one on one conversation and instead feels like he is the target and everyone in the room is telling secrets, trying to hide things from him.

he leaves the office and finds peter Brandt (Jonah Hill, in his first serious role,) one of the advisors who stood at the door during that meeting. he tries to ask Brandt what was going on in that meeting, but gets no real answers. that’s when Brandt insists that they meet in the garage, underground, where nobody can hear them. this is where the movie starts to feel like a seventies thriller.

Brandt believes that losing those overrated players was the best thing that could have happened to Billy. he believes this is the perfect time for Billy to find new talent. that’s something Billy was trying to do at the start of the movie, sitting around a board room table with a bunch of talent scouts who would comment on little details about each player they were looking at, such as how ugly their girlfriends were. “an ugly girlfriend means no confidence,” one of the old man scouts said. Billy knew these conversations were going nowhere, and even started making hand puppets with his fingers to show how the group was just aimlessly talking in circles. and then Billy went out to Cleveland and found what he was looking for.

What he found was peter Brandt, and the theories that Brandt believed in. a man who was a security guard at a beans factory, named Bill James, once had an idea that he wrote about, for how to look at players. he said that it wasn’t about the fielding, but about how many times the players got on base. it wasn’t about the types of runs they hit, or the amount of times they scored. it was only about whether they were good at getting on base. that included players who were good at getting walked. Brandt believed in this theory (he was an economics major at Yale), and was able to convince Billy beanie.

and so the movie is about using this theory to go after guys that nobody wants. that’s the first half, anyway. of course, it is met with objection and with people thinking beanie is insane and calling for his head. and when the team starts losing for a while, the threat of him losing his job only gets bigger. but beanie and Brandt together have some other ideas. they instill confidence in their players through talks and get the manager of the team (Phillip Seymour Hoffman delivering a wonderful, subdued performance), to play who they want, even when he has no plans to do so.

this movie is a true underdog story and the great thing about it is that it hardly goes near the field. the competition isn’t what’s happening in the ball games, it’s what’s happening on the phone or behind closed doors at the stadium. it’s a very smart movie, and unfortunately it goes on for too long. the first half of the movie was absolutely dynamite. it gripped us with the problem right away, and kept us glued to helping this guy find a solution. but then as it went on and on and we felt like we were seeing a lot of the same things again, it did lose some momentum. there is so much going on in this movie, including Billy’s life outside of the job, with his ex-wife and daughter, as well as his back-story about how he used to be a player who the scouts loved and got to pass up a scholarship. this movie makes the case that maybe the reason why Billy’s doing the whole Moneyball plan is because he’s trying to prove that scouts are all wrong. and he’s trying to do that because they got it wrong with him. It’s a deep movie and a very Powerful journey. if only it were about twenty minutes shorter, it would have been outstanding.