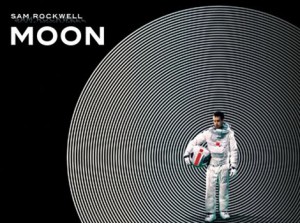 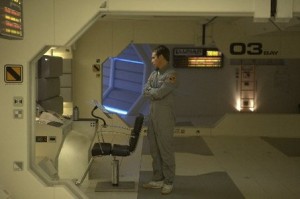 Definitely something interesting and different, the movie is good, but a little too slow moving and too long.

This is a pretty intriguing outer space movie with lots of great ideas. Those all begin with the notion that two clones can meet and work together while neither one knows if the other one is the actual  clone or not. The two characters are both played by Sam Rockwell, and they start to get th sense that this whole thing might be some kind of mystery and coverup about something bigger than it appears. The problem is they have no idea what that mystery is. The movie does have some slow portions in the mid-section, but for most of the way through, it’s fascinating and creative.

Moon is a very cool movie. it’s basically cast away in outer space for the first portion of the film, and then something happens which brings it into it’s own orbit. the movie takes on a what would you do sort of plot and gives us that age old question… what would you do if you ran into yourself? it takes that idea and surrounds it with an outer space setting, an interesting mission, and even a pretty neat robot helper.

at the start of the film, we meet sam, alone in a space station on the Moon. he has been here for three years, all by himself, with no one to talk to other than his trusty robot friend, gerty. this robot is shown as a machine with a smiley face on it, which sometimes changes to a frown. the robot is voiced by kevin spacey, who is just perfect for the part. there are definite feelings of hal from 2001: a space odyssey, combined with the red eye robot from the end of wall-e, here, but gerty is something different. he’s not the typical robot bad guy, just like this is not the typical cast away / i am legend kind of film, where a character has to make use of the resources he can find.

there are clues in the beginning of the movie that something mysterious is going on, although sam (played by sam rockwell, in one of his finer roles), is unsure of what they all mean. one clue is that when he recieves video from his wife, who is back home on earth, the video seems to be edited so that she never says what date it is or what date sam is expected to be coming home. she does mention that he will be home in two weeks, but there is no way to know when the video was recorded. another unusual situation is that sam wakes up one morning to find gerty talking with the people at the space station down on earth. when gerty sees that sam is awake, he abruptly ends the conversation and makes up a quick excuse regarding what that conversation was all about.

sam continues on his way, mining the planet for energy and talking about how excited he is to be going back to earth soon. he tells gerty that it wasn’t right for the company to have kept him up here, by himeself, for three years, and that no one should ever have to be subjected to this sort of thing again. gerty humors sam and listens. then sam drives around in his military-truck like rover vehicle, on the surface of the Moon and continues mining. only the truck gets into an accident, and sam is injured.

when he wakes up, sam is in the infirmary. gerty tells him about the injury, and how sam needs to lie down and get more rest. when same does get up, out of bed, he wants to explore. he wants to know what happened to him after the truck crashed. gerty is not supposed to let sam out of the facility, but he does anyway, ans that’s when sam makes his dicovery.

sam comes upon a flipped over truck. this is the vehicle that sam was driving when he had his accident. sam looks inside to see that there is a person in there. he gets the door opened and pulls the man out, only to see that it is actually him. sam brings the guy back to the space station, where he receives treatment from gerty, while he remains unconcious.

when the unconcious sam wakes up, the two sam’s meet each other face to face and try to figure out what is going on. both sam’s think that the other one is a clone. neither one of them is very happy with the other one, not only because of the fact that there are clones to begin with, but also because this other one won’t admit that the guy opposite him is the original.

one of the clones becomes convinced that there is a secret room and something that the company is not telling them. he’s the clone who is all about conspiraies, whereas the other clone things he is being ridiculous. the first clone goes searching for this secret room and even gets in the other sam’s way, flipping over his model buildings just to see if the secret room is under them.

while the first clone is going on this hunt, around the ship, the other sam becomes very sick and starts dying. maybe he was exposed to the atmosphere on the Moon for too long, while he was unconcious in the space truck. this is where the movie starts to get slow. one of them is dying, the other one is just going around looking for something, and nothing very exciting is happening.

then there are some cool moments that happen at the very end, involving a company that is coming to get them and relieve them of their job. it’s not enough of a climax, but it’s okay. the movie was overall very good. there was a lot of detail here, and i loved that sam rockwell got to play so many parts and to play against himself. it’s a good movie with a few bumps and slow parts here and there.