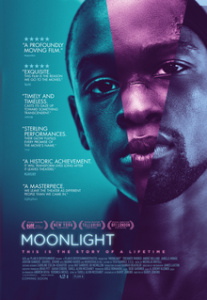 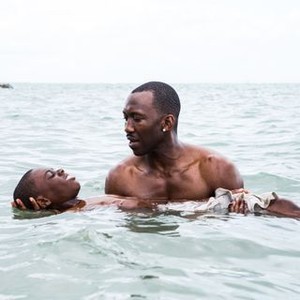 An artistic and sad movie that is somewhat interesting, but doesn’t really have all that much to offer up in the ways of a story.

There’s some definite substance here, in this movie, but it isn’t always easy to find. Moonlight is completely unconventional. Maybe that’s why the academy awards liked it so much. The movie couldn’t be any more PC, being about a black, gay kid from the projects who gets picked on and bullied until he just snaps. It’s told in three parts, and each part has its own feel and interpretation of what life is like for this kid. The problem is that the movie is not very exciting or memorable. Perhaps that is true to real life, and not every hood movie has to have drive-bys and robberies, and all that, but still, something seems missing. Even the conversations aren’t all that dramatic. And the movie certainly has no climax. It’s a fine film, but it could have made a few adjustments or additions here and there, to have made it a lot better.

Moonlight is a very artistic drama. By that I mean, it isn’t especially exciting or thought provoking or anything like that. It is, however, the most in-touch movie with hardships and reality in a while. The movie is about a black kid in the projects who is also gay. He has to deal with bullying, getting beaten up, a father-figure who is a drug dealer, and a mother who is a drug addict. The pieces are there for this to have been a great film, but the movie is more interested in a quiet poetry kind of vibe than it is in the viewer’s experience.

Case in point. There’s only one exciting moment in the entire movie. It happens to be at the end of the second act, and it’s over before you know it. Other than that, this is kind of an empty shell. Yes, the movie is sad and upsetting and a slice of life, but is that really all it takes to win the best picture of the year accademy award? Fences had more of a storyline than this, and that film wasn’t exactly big on plot either. But at least it had some real dramatic moments and some deep characters. Moonlight might have some ideas to think about, but it doesn’t have a whole lot to grip you or hold your attention.

The movie is told in three parts, with the main character, Chiron, featured at three different ages. He’s played by three actors, and each story takes place years after the other one, catching up on what Chiron’s life has been like since we last saw him. The first act of the film is called Little and takes place when Chiron was just a boy. The second act is called Chiron, and features him as a teenager in high school. Then, the final act of the movie features Chiron as an adult, big and buff and totally transformed into a drug dealer.

The first act is about meeting the characters. Little is bullied. When we first meet him, he’s hiding in some abandoned houses from a bunch of boys who are chasing after him. That’s where Juan (Mahershala Ali,) finds him. Juan is s drug dealer, but unlike most on screen drug dealers, he’s actually s good guy. He cares about Little and takes the boy under his wing. Juan gives little advice about being tough and dealing with bullies, but it doesn’t seem to help.

Little’s friend Kevin gives him advice as well. The advice is also about dealing with bullies and how to stand up to them. When Little goes home, he’s got his abudive mom to deal with (played by Naomi Harris,) who only cares about getting her next fix. She doesn’t like Little spending time with Juan and his girlfriend, Teresa, but it’s not because Juan is a drug dealer. It’s because she’s jealous that this guy actually cares for and is kind to her son, whereas she is not. She doesn’t like that Littke has a better relationship with Juan than he does with her, and takes it as an insult that Juan can do such a better job at being a role model for Little then she can.

There are some decent conversations in the first act, but only one stands out as memorable. It’s not the one where the movie gets its title. That’s just a quick line about how black boys look blue in the moonlight, (see what I mean about the movie being poetic or trying to be poetic?) But the only real memorable conversation is between Little’s mother, Paula, and Juan when Juan catches her doing drugs in a car. Paula asks Juan if he ever tells Little where she gets the drugs from. She wants to know if her son, who looks up to Juan, actually knows who he really is and what he does. She asks Juan if he’s gonna tell Little why people make fun of him. Because he walks funny. And then the first act ends with Little asking Juan if he sells drugs.

The second act is where we really see Little, (now called Black,) getting bullied and eventually fighting back. He’s a teenager in high school and the kids continue to pick on him. He has an encounter sitting on the beach with Kevin, where the two of them get sexual with each other. And then, the next day, some bullies at school put Kevin up to beating on Black. They are testing Kevin to see how tough he is, and Kevin says he will beat on anyone they name. Of course they name Black. So, without hesitation, Kevin goes over to Black and beats him up. This is that one exciting scene in the movie. It is followed rapidly by another one, (so much so, that they are basically part of the same scene, or moment.)

That second moment has Black pick up a wooden chair and slam it over the head of the kids who put Kevin up to beating on him. It’s a moment of pure rage that starts with Black walking the halls of the school in anger and ends with him being taken away in a police car. It’s interesting to note that Black doesn’t go after Kevin, the guy who really beat on him, but instead, targets the bully who put Kevin up to it. It’s also interesting to note that this happens a day after Black’s sexual encounter with Kevin. Maybe Black is so furious because this bully took the one good thing he had going, (his love for Kevin,) and destroyed it.

The final act of the movie is called Chiron. That’s our main character’s real name. He is out of prison, and looking like a completely different person. Whereas in the first two acts you could tell that it was the same guy, a skinny weak kid, now Chiron looks muscular and tough as hell. He has younger kids coming in and bringing him suitcases of money. Chiron is now a drug dealer himself. The movie certainly makes a statement about that, since the good guy, Juan, his mother, and now Chiron all found themselves either doing or dealing drugs at one point. The statement here is that in certain places and areas of life, it is unavoidable.

Then again, Kevin has no part of any of that. He’s a cook living in the same place where Chiron and him grew up and he calls Chiron out of the blue. Chiron takes that as a sign that he should go and visit Kevin, and he goes to the diner where Kevin works. It’s at this point that we realize the movie is really about the relationship between these two guys. It goes from friendship to romance to enemies to friendship again. Full circle. Nothing very exciting happens in this final act, and that’s a problem considering that the movie has no climax. Still, it’s interesting to watch three stages of Chiron’s life, and how one of them unfolds into the next.