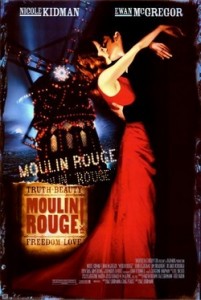 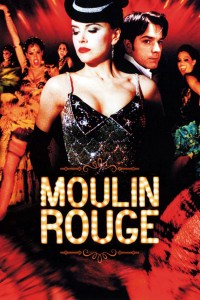 A movie that places style above substance as it gives us a very basic story surrounded by all of the glitz, glamor, and musical numbers one could ever desire.

Moulin Rouge has all the glitz and glamour and artistry and atmosphere to make ten movies look great. And that’s a pretty big accomplishment. But the story doesn’t quite cut it the way it should. It’s not a terrible story or anything, it’s just not good enough. Not deep enough and a little too elementary. The movie is a musical of sorts with characters often not singing whole songs, but just the chorus of a song and spinning it into the chorus or lyrics to another song. That’s a creative idea, and it works well for this film.

The thing is, as a musical, it’s fun, fantastical, and creative. But the simplicity of the story does hold it back. It’s as if all of the effort went into the look of the film, and the filmmaker, baz lurhman was too distracted with that to sit down and address the basic ideas.

The plot is about a poor writer (Ewan McGregor) in france who stumbles upon a sort of burlesque entertainment club for adults. He instantly falls in love with the lead performer (nicole Kidman) and through a slight mix up, ends up in her bed chamber one night in place of the duke who was supposed to be there. Mcgregor plays Christian, a kind of stumbling, woody allen type, who believes in love more than anything else in the world even though he’s never been in love before himself. He’s an idealist and kidman’s satine thinks he’s pretty funny and charming. But she is dying from a disease and the duke is willing to put up the money to make her into a big star if she will just be with him.

For the duration of the movie, the plot doesn’t really go much deeper than this. Satine goes back and forth between christian and the duke, trying to convince the duke that she is interested in him, and is only working with christian on their show. It’s a little bit silly, how much they do without the duke ever noticing, and how they continuosly pull the wool over his eyes. I felt like i was watching a looney toons cartoon at times, and like the duke was another version of wiley coyote.

Jim Broadbent plays the great big owner of the theater and the man in charge of everything that goes on there. But he doesn’t have the money to make this great show that the duke promises. And so Broadbent pimps Satine out to the duke so that the show will get made. But he also does it for her, knowing of her illness and seeing this as her only way to get out. the duke will make her a big star. But at what price?

John Leguizamo also pops up as a funny little dwarf who is in a band of characters that find christian, bring him to the theater, set him up to meet satine, and then participate in all of his gimmics from then on. Leguizamo is a lot of fun here, and performance-wise, he’s the best thing about the movie. I think part of the failure of the film is that it cast such a one dimensional actor as the villain instead of a known actor with some sort of merit. Suppose broadbent or leguizamo had been cast as the villain instead. Then we might have had someone who we could sympathize with, or at the very least, find interesting.

But this movie isn’t about story. The story behind it is very carefree and simple. The entire movie consists of christian and satine fooling the duke and getting it on behind his back. By the time the big show rolls around, the duke has finally caught on. That’s because another actress in the show points out to him how the characters in the show are clearly meant to be him, christian, and satine. That part, where this actress explains it to the duke, and then where the duke argues for the show to end his way, is one of the few interesting plot points of the movie. i love the moment where mcgregor has a slip of the tongue as he tries to explain the motivations behind the characters in the show and yells at the duke, “because she doesn’t love you. I mean, him. She doesn’t love him, the maharaja.”

So the duke catches on, but still does not withdraw his money from the show and turn his back on it, like he should. Instead he just bans christian from the theater. And then we get the climax, the big show, where christian forces his way into the building for a showdown of sorts. There’s nothing special or creative about any of this.

The songs chosen by this movie are all great ones of immense popularity, from the beatles to madonna. And I like the idea that the lyrics to those songs are being used as dialogue that is sung from one character to another. As far as the music goes, this movie defintiely knows what it’s doing.

But plot and characters are so essential to a good movie, that a movie really can’t be made without them. You can’t have a good movie without a decent plot, not even if it’s a comedy. And in Moulin Rouge, it’s not that the plot isn’t decent, it’s that it’s just too elementary. Every one of the characters is too simple. There are no secrets or twists or surprises of any kind. Instead, there are lavishly colorful sets and lights and decorations. That’s all well and good, and I’m sure if we were really at the Moulin Rouge, that would be enough. But for a movie, it might be nice to look at and listen to, but without a strong plot, it just doesn’t make the cut.