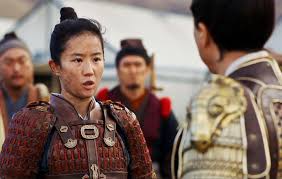 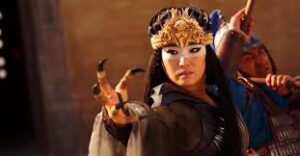 The colors and artistic look are on point, and some of the action is pretty good, but without the songs, this one isn’t quite as good as the animated version.

A truly beautiful film to say the least this one just looks fantastic every step of the way. Taking influences from movies like Hero, Crouching Tiger Hidden Dragon, and House of Flying Daggers, this movie gives us a Disney live action film that feels more like it comes right out of Hong Kong Cinema. And telling the story that way turns out to be a pretty smart idea. We get the same overall story as in the Disney animated film, only there are some significant changes that all (mostly) seem to be for the better. The songs are out. The dragon sidekick, Muchu, is out. And a new character, A Witch, who teams up with the main villain, is in. Her character ends up being one of the most interesting parts of this movie. There are some parts that are slower than others, but the action is high caliber and the colors are right on point. Disney made some bold moves with this one… it feels more like a movie for adults than for kids.. but they really payed off.

The live action version of Mulan doesn’t have songs. It doesn’t have Eddie Murphy’s lovable dragon sidekick. And yet despite these things, the movie soars. It’s very different than the animated version to put it mildly. In fact, unlike previous Disney Live Action remakes, this one doesn’t even seem to be made with the same tone as the original. The animated movie is clearly for kids and you can feel that every step of the way. Not that it’s overly silly or anything, but it’s light and fluffy fun. The remake on the other hand is pretty serious. It’s clearly meant for adults who appreciate Hong Kong action cinema. After all, this movie is in many ways a call back to films like Crouching Tiger Hidden Dragon and The House of Flying Daggers, which is not something you would ever expect to hear about a Disney movie.

Let’s start with the look of the film. This movie is made with vibrant artistic colors. Visually, this movie is a juggernaut, capturing the most magnificent reds and yellows. It nearly competes with the Jet Li film Hero, which is probably the most colorful martial arts film around. That movie, made by the same director as House of Flying Daggers, Zhang Yimou, was part of an uncredited, unofficial three film trilogy (the third being The Curse of the Golden Flower,) that really showed off how beautiful fantastic could be, especially when combined with the world of martial arts action. This new Mulan film is very much in the spirit of those other movies.

And if those movies are the modern Hong Kong action film, than Mulan takes elements from both them and also the older Hong Kong films. In fact, one is used in particular… Once Upon A Time in China II the Jet Li film that ranks among the best action movies of all time. Multiple ideas from the climax of Mulan, from the narrow hallway chain twirling around the head scene to the construction site final fight scene, appear to come from that film. And there’s nothing wrong with that. Taking the cool elements that worked for other movies and finding a way to rebrand them for a wider audience is something Hollywood has been doing for ages. The new Mulan is just the first movie to do it with Asian action cinema (unless you’re counting something like Tarantino’s Kill Bill.)

But Mulan works as much more than just a beautiful action film. It also works as a pretty cool movie with a great story. The story is the part that pretty much is the same as that of the original film, give or take a handful of elements. China is under attack by invaders. The Emperor issue a decree that every family must send one man to fight in his army. Most families send their oldest son. But Mulan’s father has no sons, and so he prepares to go himself. Only he is old, and not in very good shape. And so Mulan suits up, dresses like a man, and slips out in the middle of the night to go and join the army. And of course, she ends up being the greatest hero of them all.

That much of the story is the same. But how it is all told ends up being different in a number of ways. For starters, the movie opens with a sequence that shows a young Mulan chasing after a runaway chicken and ending up on the roof. And it’s not just any roof. This is the roof of a fantastic looking complex. Mulan and her family live in a village-of-sorts that is more like an apartment building mixed with a castle. There’s a common area courtyard in the middle of it all, and then walls that wrap around it, forming an oval shaped coliseum. This location is where the movie starts and ends, and it serves as a pretty cool spot to feature at both ends of the movie.

Another major difference is a new character called The Witch by most of the characters here, (although she strongly objects to that name and instead claims herself to be a warrior.) Still, there’s no question why characters call her a witch with her powerful sorcery, talon hand, and ability to turn into a bird, or even a flock of birds on free will. This character can even join with another person by going inside their skin to become then, an idea that is established very early on in the film, by using shadows. She is a sidekick to the villain, and helps his army conquer whatever land they desire, often by flying out ahead of them, making her way into the location they will be attacking, and doing whatever she can from on in the inside to help the invading army.

The Witch is definitely the coolest new addition to this movie. For one thing, even when the film as not as lively as it is at other parts, during Mulan’s training, we can always go away from that and jump to a scene with the invading the army featuring the witch. The training scenes are fine, but they are nothing special. This is the one area of the movie where a little music from the original film would have gone a long way. Especially the great song “I’ll Make A Man Out of You,” by Donnie Osmond, which is actually up there with some of the better Disney movie songs around. Especially when combined with the fantastic montage in that movie. But luckily those training scenes in the remake don’t go on very long, (there’s only so many times you can watch characters try to carry buckets of water up the side of a mountain.) And whenever they cut to the invading army some real spice is added to the film. These guys have some pretty impressive skill on their side, including the ability to walk up walls, due to the magic of the witch.

And that brings us right back to the action. Why not? It’s probably the best thing about the movie. That and the artistic look and colors. The action really kicks into gear at about the halfway point of the film, with the big battle. This is where Mulan sees that the enemy is firing catapults lit on fire, onto her battalion, and that they have no means of escape. The best they can do is all huddle together and raise their shields above their heads. So Mulan decides to ride off to the mountains, get behind the enemy, set up helmets on top of rocks to look like men are behind the rocks, and fire a bunch of arrows at the enemy. This makes the enemy forces think there is a group of soldiers behind them, and start firing catapults in that direction. And one of these hits the side of the mountain and brings down an avalanche. Now this is different than how the avalanche happened in the animated film, and this approach is far superior.

While there are tons of amazing things about this movie, including the construction site ending, (which even has a little bit of Rush Hour 2 in it, with the Chinese bamboo building scene early on in that film,) there are also some peculiarities. Like that battle scene which was so great had just one misstep… a moment early on with Mulan and her fellow soldiers on horseback where it became way too complicated to figure out where she and her team were in relation to the enemy. Another peculiarity is Jet Li being used here, as the Emperor. An icon of Chinese cinema, it isn’t so much the use of Jet Li that is the mystery, as much as it is that his voice is dubbed. Perhaps this is due to medical conditions with the actor, in which case it is understandable, but the voice he uses here is definitely not his. And it’s a little sad to not see him do any action either. I guess that’s just what comes with getting older.

Mulan, the live action film, is a pretty masterful movie. This one really does fit up there with some of the better movies of Chinese cinema. Granted it is not Chinese cinema at all, and made by Disney (I was surprised to learn that they didn’t bring in a Chinese director for this one,) but as a tribute to those films, the movie definitely works. It seamlessly combines the trademarks of the older Hong Kong films with the trademarks of the newer ones and it does this while also telling a pretty fantastic story. The mid section of the film, before the warring armies meet each other, is a little too dark in literal terms of light and color, when compared to the rest of the movie, and so that section is not quite as much fun. But the start and the end of the movie more than make up for it. This movie looks fantastic and really delivers on the action in ways we haven’t seen in years. What a tremendous film.