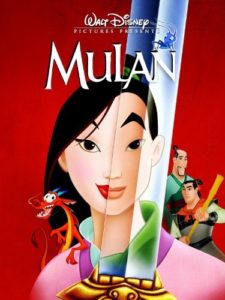 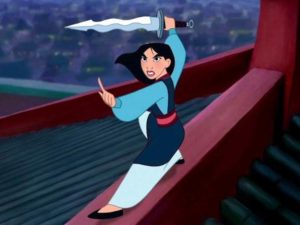 Not one of the classic, standout Disney animation movies of the nineties, this one is more of a second tier movie, but it still holds up mainly due to two fantastic musical numbers and an interesting story, surrounded by some pretty decent humor and action.

Mulan is the Disney movie based on the famous Chinese story of a girl who goes off to war, disguised as a man, so that her elderly father doesn’t have to go instead. At a time when everyone doubts a woman can be anything other than a good wife, Mulan proves them all wrong by becoming a military hero. The movie tells this story pretty well, and features some fantastic musical numbers… namely the song towards the beginning where Mulan makes her decision, and the training song, “I’ll Make A Man Out of You.” There’s a lot to like here, including Eddie Murphy’s animation voice work breakout, that predates his work with Shrek. But there are also some negatives including not quite enough action, and the way that both big action scenes (yes, there are only two,) end up going the exact same way. Overall, it’s a pretty good movie with a lot to offer.

Mulan is one of those Disney animated movies that got kind of lost in the mix after the big four (The Little Mermaid, Beauty and the Beast, Aladdin, and The Lion King.) Those movies relaunched Disney animation and elevated the status of the studio to a point that it would remain at ever since. However, in terms of animation, Disney hit an interesting period around this time, as it transitioned into CG rendered animation. In 1995, Pixar put out Toy Story, the first CG animated movie. At this point, Disney had not yet fully acquired Pixar, (although they were still producing Pixar movies,) and so Disney was putting out their own films simultaneously. So while Pixar was putting out a Bugs Life in 1998, and Dreamworks was putting out it’s competing project, Antz, Disney was putting out Mulan.

No wonder it gets lost in the mix, Mulan is the movie that looks like a relic compared to those other films. But looking at those three movies today, Mulan holds up best of all (hence why Disney has a live action remake coming out.) This was the time of the lesser known Disney animation movies (and the last of the wave of Disney 2D animation, including Pocahontas, Hercules, The Hunchback of Notre Dame, and the Emperor’s New Groove,) and Mulan happens to be one of the best of this bunch.

The movie doesn’t have the most creative or brilliant story. It’s about a time of war in China where each family member had to send one “man,” to fight for the Emperor. And since Mulan’s family had no sons, but just an elderly father who would not survive the war, Mulan decided to pose as a man and go off to battle. Obviously, Mulan ends up becoming a hero and saving the day and proving everyone wrong who turned down the idea of a woman taking up arms. So what more does this story have to offer besides those basics of a famous Chinese folk tale? It actually has to offer a lot in terms of music, humor, and some pretty cool training scenes.

Let’s start with the music. This is a staple of the very best Disney animated films. All four of the big four feature masterful songs, starting with the Little Mermaid, where Ariel, Sebastian, and even Ursula got in on hitting the chords. In Mulan, the titular character sings some of the songs, but they aren’t the better ones. Not every song works here, and some certainly work better than others. But there are two songs that are fantastic. And they are both part of wonderful montages, that combine the perfect images with plot points in the story, and musical powerhouses that string it all together oftentimes creating short stories out of their songs.

The first of these is the song that plays when Mulan makes her decision to take up arms and leave her family. Apparently a different song was originally used during this sequence, which was more traditional, in terms of Chinese chords and a better fit with the other songs in the movie. But the powers that be wanted something bigger and sharper for this “no looking back,” moment which was the most important moment and decision in the movie. And they got it, with a brilliant synthesizer song that featured no words, but a real sense of urgency and determination. The song plays with images such as Mulan picking up her father’s sword (and seeing her reflection in it,) to her leaving her comb beside her parent’s bed, to her slicing off her hair. And it was definitely the right decision to swap out that other song and trade it for this one. It leads to an amazing sequence all around.

And if that song is great, (which it is,) the next one is even better. It’s the best handful of scenes in the movie and it all comes with the song, “I’ll make a man out of you,” by Donnie Osmond. This song tells the short story of how the soldiers trained under Shang (BD Wong,) and started out as really terrible fighters. But Shang taught them and trained them, and one day Mulan proved through determination, that she could accomplish her goal. That goal was climbing a pole with weights around her hands to get an arrow. Everything about this moment, including the way she pulls herself up out of the shadow and into the light, to us not seeing her retrive the arrow, but only seeing it fall down to the ground beside Shang’s feet is fantastic. And so is the way the background beat stops at the end of the song, while the action continues. The moment where Mulan takes down Shang in a fight is just incredible. What a song!

Of course, that is the best sequence in the entire movie. Nothing else even comes close. And really the two musical numbers together, including the montages that accompany them, are the best things about this movie. But there’s still a solid film here, ever without them. For one thing, there’s plenty of humor. Taking the stand up comic being brought in to voice the side-kick mantle that Robin Williams kick-started when he took on the Genie in Aladdin, this time we have Eddie Murphy voicing Mushu, a little red spirit dragon. In this movie, the families pray to their ancestors, (as opposed to gods,) and their ancestors send help to watch over Mulan. They try to send a giant stone dragon, but Mushu accidentally causes the stone dragon to fall apart, and so Mushu goes in his place. And Murphy is pretty funny in the role. He was definitely better as Donkey in the Shrek movies, but his work here was a nice start.

One thing that definitely separates this from other Disney animated films of around this time, and especially from the big four, is the villain. Here, he is completely forgettable. Nobody knows or cares to remember his name. This guy is huge and menacing, but he really doesn’t have a whole lot of personality. Not when compared to the likes of Ursula, Gaston, Jafar, and Scar. This guy has some interesting lines here and there, like when he claims the Emperor invited him into China by building the Great Wall, and he sure does look cool, but he’s lacking in personality, (and in a memorable name.) The same can be said of the other villain of sorts, the Emperor’s advisor who accompanies Shang and his men and discourages them every chance he gets. This is the evil advisor character and boy does he have some harsh things to say to Mulan later on in the movie.

But despite these forgettable villains, and the just okay story, the movie still has a lot going for it. The action scenes are kind of fun, even if they are pretty limited. There’s basically just the snow mountains attack and then the ending scene inside China’s Forbidden Kingdom. But they both pack a punch. And speaking of the Forbidden Kingdom, it’s pretty great that this movie uses real locations of Beijing, China. It opens on the Great Wall, which looks pretty authentic. And then it closes in the Forbidden Kingdom, where again, they try to get the look right. This goes a long way. The only problem with the two action scenes is that they both end the exact same way, with Shang getting knocked unconscious and Mulan having to save him. Once is fine, but they shouldn’t have both featured this same idea.

Despite a handful of flaws, most of them not too important, Mulan is still a good movie. The themes are pretty compelling… honor for the family, and whether or not women can do the same things as men. They come up a ton of times throughout the movie. And the story is fine. The action scenes are generally pretty good, and two of the songs as well as their montages, are absolutely fantastic. It might have been nice if the characters (all besides Mulan, herself,) were a little deeper, or if she and Shang had more of a connection with each other, but the movie seems determined to get from one point to another pretty quicky without wasting any time, and the urgency and quick pace definitely help movie it along. This movie is definitely entertaining and fun, even if it isn’t the smartest tool in the shed.