Murder On The Orient Express ** 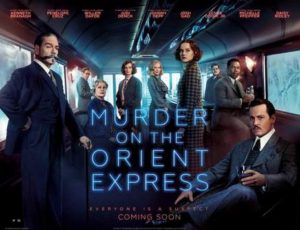 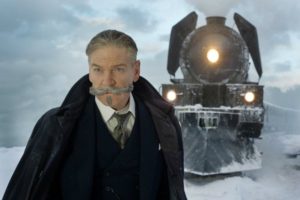 The star studded cast and great atmosphere go a long way, but the mystery itself feels way too thin and coincidental, especially in the speed with which it is solved.

A decent mystery, but far from anything special, this movie tells the story of a snowbound train where a passenger has been murdered. The atmosphere and setup are great. The train is stuck in place for a series of days, making the still location with a bunch of strangers on board feel very much like one of those classic strangers in a mansion movies, (for which author Agatha Christies, who wrote the book that this based on, also penned the original concept with her novel And Then There Were None, about strangers at a party in a mansion.) The atmosphere and setup might be pretty cool, but the way that this murder mystery is solved, most certainly is not. Clues start falling into the detectives lap and events pile up that are way too coincidental. It’s a somewhat enjoyable experience watching the movie, due to the all star cast, but the story itself has a few too many holes and simplicities.

Murder on the Orient Express is probably the most classic Agatha Christie book. It’s either that or And Then There Were None. Christie is the most famous author of murder mystery books. She’s like the Alfred Hitchcock of literature. And both she and Hitchcock always tried to branch out and find creative locations or angles to tell their stories from. Be it Read Window, (Hitchcock,) with a murder told from the viewpoint of a man stuck in a chair with two broken legs, seeing the whole thing out his window, or And Then There Were None, about a group of strangers invited to a mysterious mansion with an unknown host, (yes, it was the inspiration for Clue, Murder By Death, and many other films,) these two were both the masters of their craft.

And Murder on the Orient Express is the first Agatha Christie book brought to the screen for the modern era. There was a version made in the seventies, starring Sean Connery as well as a number of other famous faces, but that was roughly forty years ago. Times have changed, and this is the modern version of the classic story. Unfortunately it’s not all that great. The cast is certainly star-studded, just as it should be, but the story itself feels like a poor man’s Sherlock Holmes. This detective, Hercule Poirot, (played by Kenneth Branagh, who also directed the film,) figures things out way too easily with way too much confidence and certainty. And that’s only part of the problem.

The other part is that the movie isn’t all that thrilling. We never feel like anyones life is really in danger, (other than the one person who dies, who we all know is going to die from the very beginning.) That character is Edward Ratchett (played by Johnny Depp,) and he comes to our detective asking for help, sure that someone is out to kill him. He wants the detective to watch his back, claiming that he has been dealing in fakes of artwork and has finally sold to the wrong person. A gangster. Now, he knows that his days are numbered. He basically telegraphs his murder for us, so that we know exactly what’s going to happen, and it does.

Long before this, however, we get an opening scene by the wailing wall in Jerusalem, where Poirot solves a crime of theft, involving three suspects, each from a different religion. Considering that this is the holy place of three of the biggest religions in the world, and that the three suspects are each leaders of their faith here, the situation seems very much like one of those jokes, (A Priest, A Rabbi, and a Monk walk into a bar and…) and Poirot even references that. Then he solves the crime in a very understandable, outside of the box, kind of way. It’s a great opening scene, (although the way he places his walking stick into the wall and it ends up tripping the villain on his escape run, as if Poirot was able to forsee the future, is a little much.) But the way this little mystery is solved is pretty cool. Unfortunately the other mysteries of the film are not as clear or easy to follow.

Poirot heads to London on the train, and it’s at the station that we meet a number of the passengers who will be getting on board. Most of them don’t stand out or make an impression at all. Only the quiet Count does something worth noting when a bunch of photographers take his picture and he drop kicks every single one of them. It’s the only real action scene, or moment, in the movie, and it might be out of place, but it’s still pretty cool. Not long after that, we are climbing aboard the train with our detective, and meeting the other passengers as they begin to settle in.

One way that this detective stands out and differentiates himself a little from that other quirky, strange, and genius detective, Holmes, is that Poirot has a rationale for his gift of seeing things. He claims that it is more of a curse than a gift, and that is an obsessive compulsive perfectionist. He claims that when he looks at the world, he sees everything wrong with it, and so if there is a crime, he right away sees whatever mistakes the culprit might have made in covering it up. This logic is pretty cool.

Regarding the mystery itself, what we have here are a bunch of characters who were all supposedly in their rooms the night of the murder, and yet who all might very well be the killer. Poirot makes the case that if there was a murder than there is a murderer and that the murderer is still on the train. It’s a little obvious. What he doesn’t clearly state is that the murderer is one of them. It’s a missed opportunity to say something like “the murderer is in this room with us right now. He or she is one of you.” Still, that idea does come out through other characters, like the one played by Daisy Ridley who insists that she’s sleeping in the dining car of the train where everyone can see her, and she can see everyone.

And so Poirot begins conducting interviews, trying to put the pieces of what happened together. He gets a pretty lucky break when he finds a partially burned out revealing that Ratchett was actually the man who kidnapped Daisy Armstrong, a child who was abducted and held for ransom. The ransom was paid, and then the girl was found dead. The mother died in childbirth shorty after. The father committed suicide. The nanny was falsely accused and arrested. She later committed suicide in prison. And all this because of Ratchett’s kidnapping. This, of course, is based on the famous Lindenberg kidnapping case, but for the movie it’s pretty lucky that Poirot finds this note, basically spelling out for him exactly who the victim was. Now he just needs to look at the suspects on the train, to figure out who they really are.

Speaking of coincidences and lucky breaks, (and I know this is based on Christie’s book, so that the coincidences are more the author’s fault than the movie’s fault,) the very night of murder, the train is hit by an avalanche in the mountains and is stuck on the tracks until further notice. They are snowbound and set in one place, and even when words gets out to the train company of what happened, it still takes days for the tracks to be repaired. The reason why this is so relevant to the plot is because it isolates the characters in a single, still location (much like And Then There Were None or any of those mansion murder mysteries.) It makes it so that Poirot is the only detective around, trying the case, whereas if the train reached its destination in London, the police would get involved.

Aside from the note, some of the other major clues or items that Poirot is looking for include a red kimono, and a set of conductor’s keys. The night of the murder, a person wearing the kimono was seen running down the hallway. And whoever the killer is had access to every room by way of the keys, which is how the killer entered Ratchet’s room silently. Looking for and finding these items becomes fun, but once they are found, nothing new is actually revealed. In this way, the movie doesn’t follow down a path where each clue leads to the next or pushes the story forward, the way most great mysteries do. There’s a lot to dislike here, but the snowbound location is pretty cool, the murder and case are pretty interesting, and the atmosphere and look of the film are fantastic. It’s an okay movie, that feels kind of like the Jonathan Damme movie, The Truth About Charlie, which was a remake of the classic Carrie Grant / Audrey Hepburn movie, Charade. This remake is a little better than that one, but it doesn’t seem like they are making any changes in the story to improve on it. Therein lies the problem. Murder on the Orient Express might be one of Christie’s more famous books, but it certainly has its flaws, and this movie should have taken the opportunity to improve on them. Instead, it tries to be faithful and loyal, and as a result, delivers us a very mediocre movie.