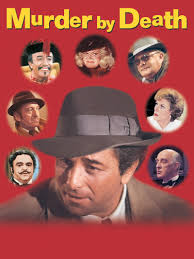 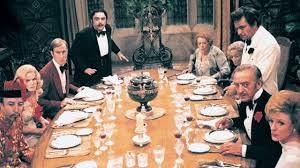 Clearly the inspiration for the movie Clue, and the middle film connecting that one to And Then There Were None, this movie isn’t nearly as good as those others, but it’s interesting to see where some of those ideas might have come from.

A movie that pays more attention to humor than plot, the jokes don’t really land as well as the film expects them to and it results in a problem. The story here is pretty good, about a bunch of detectives who are brought to a mansion to solve a crime. The crime is a murder that they are told will be taking place. They are even told the time that it will happen. It’s their job to put the pieces together and either stop the crime from happening or to solve it once it does. When the movie does focus on story, such as including traps and tricks about certain rooms, it definitely works. When it goes for humor above anything else, it does not. The humor level here is very dated, but luckily the plot holds up pretty nicely.

Murder By Death is the unofficial middle movie between Agatha Christie’s classic novel turned movie And Then There Were None, and the movie Clue. Those two movies, are both fantastic. This one isn’t quite on the same level. To be fair, this movie came before Clue, and considering how many ideas are nearly identical, this movie definitely did it first and had the original ideas that inspired. Clue definitely ripped some of them off. But at the same time, Clue did them better, and at the end of the day, that’s really all that counts. If the two films were side by side, the question of which one is better and which one someone should watch, if they were to only see one, would definitely lead to Clue. It’s the case where a sort of remake is actually better than the original, just like with John Carpenter’s The Thing, or Sam Raimi’s Evil Dead 2.  Still, with Murder By Death, it’s interesting to see how one movie might have led to another, and also for the clever way that this film takes on famous detectives throughout cinematic history.

Normally if a movie was so similar to others, it would be a problem. After all, why watch the same story or just another version of it, again and again? Why not just watch the best version? In this case, however, watching as many takes on this story as possible is a pleasurable experience, simply because it is one of the greatest stories  and concepts of all time. The situation is that a bunch of strangers have been invited by a mysterious host to a mansion for a single night or weekend. The guests don’t know why they are there, and one by one, either they or the people working in the house, start to be murdered. One of the people in the house is the killer.

With And Then There Were None, it wasn’t just a house, but an island, and it wasn’t one night, but  a long weekend. In that film, it was the guests, and not the staff, who were indeed getting killed. That story also featured a statue of Ten Indians, and the song Ten Little Indians, where each time someone was killed, one of the Indians was removed from the statue by the killer. That trademark has never been stolen by another film and belongs solely to that movie. Murder By Death took the basic premise of the whole thing to the next level by setting the story all in one stormy night, in a giant mansion. Clue did the same.

A major difference between Clue and Murder By Death is that in Clue, the guests are all random characters who we have never met before. They each receive code names, mostly based on colors, such as Mr. Green, Ms. Scarlet, and Ms. White. They are each given a single weapon. All of this is meant to keep the story somewhat close to the classic Parker Brothers board game. With Murder By Death, the code names and weapons are nowhere to be found. Instead, each character is a detective, and each actor is impersonating a famous detective from classic cinema. So Peter Faulk, for example, who is so famous for playing the great television detective, Columbo, is immitating Humphrey Bogart in this movie. Specifically he is meant to be like Bogart’s character from the Maltese Falcon, Sam Spade, doing a Bogart voice and everything. In this movie, the Faulk character’s name is Sam Diamond. Another one of these actors and impersonations is Peter Sellers playing the Asian detective Charlie Chan.

One thing that this movie does take from And Then There Were None is the idea of a loose statue on the roof of the mansion being dropped on people who are standing outside. This idea has come up in a number of other movies, such as Hot Fuzz, and in And Then There Were None, it led to the death of one victim. Here, in Murder By Death, it is a gimmick that is used for each guest who arrives. They ring the bell, wait outside the door, and the statue drops. Each character finds a different way to avoid it. What becomes a problem is when the movie tries to go for slapstick humor, more than for thrilling story. For example, this statue dropping situation at one point involves a character pointing out to another that there are outlined footprints on the ground for where to stand, and that if you stand in them, the statue will land right on top of you. This kind of ridiculous joke reminds me of something out of a Naked Gun movie. Now Clue had humor in it too, but it was more like black comedy, realistic humor, such as everyone thinking that they might have stepped in dog poop, upon arriving at the mansion.

What works best about this movie are the ways that it differentiates itself from those other films. For example, there’s a rickety bridge that needs to be crossed in a car before arriving at the mansion. This idea is totally original and it leads to a funny scene where a father gets out of the car and then tells his son to drive over the bridge. Another thing that works is the message that at midnight, someone will be murdered. On the one hand, it makes things a little too simple, knowing exactly when to expect the murder, but on the other, it leads to a funny moment as the clock winds down to midnight and everybody sits around holding hands and watching each other.

The humor level or lack thereof becomes the biggest problem with the movie. It’s not very funny and it seems to insist that it is. This all starts with Peter Sellers playing an Asian man and doing about as racist and stereotypical of a performance of one as Mickey Rooney did in Breakfast At Tiffanys. You don’t cast a white person to play an Asian, and if you do, then you don’t give him a terrible Asian accent which can pretty much be chalked up to making fun of the way that Asians speak. Especially if you’re playing the accent for laughs. There’s plenty of other humorless jokes packed into this movie as well, such as a blind butler who is tested out by one of the guests. This guest wants to make sure the butler is blind, and so he makes funny faces at the man. One face would be quick and fine, but the guest continues to make a bunch of different ones, and it gets dumber each time. Still another example is tongues that come out of paintings where a person is watching from behind the painting. We’ve all seen the cliche of a paintings eyes following someone around a room, so this movie adds in a tongue. It’s an idea that exists for no practical reason at all, other than that it is supposed to be funny.

The movie definitely tries to go all out with extreme humor, no matter how ridiculous it is. When two guests open the door to their room for the very first time, they find a giant fire burning on the bed. Two other guests, in a different room, open the door and find the place covered in cobwebs. These ideas are entertaining, but they are hardly funny. Maybe if the characters handled the situations with anger, the way people in real life might, there would have been some humor, but instead the guests just go with it, ignoring the problems, and we are supposed to laugh as if they don’t notice.

What does get pretty cool are the scenes that aren’t so much played for humor, but played for spooky traps. One of the coolest things about Clue was the use of secret passages behind paintings and walls that led from one room to another. In this movie, the cool thing is that rooms start to become deadly traps. One room in particular starts closing in on the characters with the ceiling coming down on them and crushing everything in its path. Another cool scene that also plays on illusion and the idea of a trick or trap involves a character who leaves the guests in a dining room, goes somewhere else for just a brief moment, and then returns to find the dining room empty. The reason why, and what trick is being played on this guest, turns out to be a lot of fun.

Murder By Death is meant to be a slapstick spoof on the detective genre. If And Then There Were None is the real, mystery and suspense version of the story, and Clue is the black comedy version, then this movie is the spoof and satire version. Very little is to be taken seriously here, and that would have been fine if the humor was just a little better. Instead, it all feels very dated. It takes what feels like about close to a fourth of the movie for all of the guests to arrive. Then it’s not until the final segment of the film that the first guest is actually murdered. So the pacing is definitely off. But there are plenty of plot ideas here that work very nicely, including the mysterious invitation to the house. I like that the characters are all detectives who each figure out a different motive for the crime. When the movie pays more attention to story than humor, such as in these cases, it definitely works.