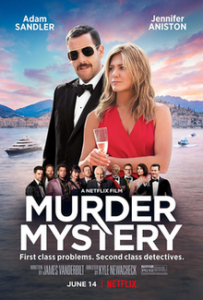 It’s nothing we haven’t seen before, but seeing Sandler back in decent form is nice, and the movie does have fun with some of the great, classic murder mystery tropes.

This is an okay movie. It’s not especially funny, although it does give us the best Sandler performance in quite a while. Here, he’s just playing a regular guy who gets caught up in something he never expected. When Nick Spitz (Sandler,) and his wife Audrey (Jennifer Aniston,) accept an invitation to go on a private yacht, they never expect to be at the scene of a murder. The movie takes us through multiple locations, and spends a decent amount of time in each one, including a plane, a yacht, a hotel, and a mansion. That ends up being a nice touch on the usual formula for these kinds of movies which tends to keep the characters locked up in one mansion for the entire night. The story is fine, and the characters are entertaining, but this is definitely nothing original. In many ways it is a parody of those other stories, like Murder on the Orient Express and And Then There Were None, or at the very least, an homage.

Murder Mystery is the best Adam Sandler movie in ages. Probably since Punch Drunk Love. That’s because in the last ten plus years, or so, Sandler has become synonymous with making awful movies. His humor has become so bad and annoying that most of his movies are pretty much unwatchable. I remember a few years back, seeing the trailer for That’s My Boy, and thinking “maybe this is the one. Maybe this is the one that gets Sandler back and that is actually funny.” Boy was I wrong. Sandler’s humor is so juvenile that it seems to literally be made for kids. And not very smart ones either. The only times where he’s been interesting in the last decade, were when he took risks and made movies that were outside of his comfort zone. Punch Drunk Love was one of those and Funny People was another. With Murder Mystery, he’s not taking much of a risk, (this is not a serious or dark movie at all, like those others,) but he is going for a more mature brand of comedy than we are used to getting from him. And that makes a huge difference.

This movie, unlike most of his others, is about relationships. Specifically it is about the relationship between Nick Spitz, (Sandler,) and his wife, Audrey Spitz, (Jennifer Aniston.) Now, it’s not as if other Sandler movies weren’t about relationships. All those movies he made with Drew Barrymore certainly were, (The Wedding Singer, 50 First Dates, Blended,) and so was the previous movie he made with Aniston, Just Go With It. But here, Sandler is actually playing an adult. An older and more tired kind of guy who doesn’t have the time or energy for games. He moves slower and acts slower, and that goes a long way. No more stupid voices or shouting when he gets upset. This time, like in those more serious movies of his, it seems like he’s actually playing a real character.

When we meet Nick for the first time, he’s having a conversation with his friend Jimmy on the street. They are both police officers, and Nick has lied to his wife, telling her that he made detective. He’s going out on a double date with Jimmy and his wife, and is asking Jimmy to go along with the lie. And to get his wife to go along with it too. Jimmy says he can’t do that, and Nick tells him to tell his wife just not to say anything about Nick lying. It’s kind of funny, and so are all the little things Nick does to get an anniversary gift for his wife, (buying a 50 dollar gift card to Amazon, looking and laughing at silly cards in the store.)

We meet Audrey, meanwhile, at a hair dresser salon, where she works and talks to a bunch of women who are all around her, about how Nick never takes her anywhere. She tells them about a post card he gave her when they got married that said “Soon,” and had a picture of Italy on it. Only soon never came. And now, she’s pretty much given up. The other women also complain about the men in their lives, saying they don’t even get flowers anymore. All of this is to establish the trip situation, and how badly Audrey wants to get away. It does the trick.

From there, we get the double date dinner with the other couple, where Nick has to let the wife of his buddy drink as much as she wants, (knowing he’s paying for the bill,) since she knows his secret. And than it’s back home, getting ready for bed, and some angry flossing by Audrey. There’s a very funny moment where he makes fun of her flossing, then notices she’s mad at him, and offers her the bag to do more angry flossing. She asks him why he still hasn’t taken her anywhere, and he tells her that she ruined his surprise. The surprise was that for their anniversary, he is taking her to Europe. This setup, which encompasses everything that led up to this moment, works. It moves quickly and gets us to where we want to be. But now come the moments that could have been better. How about a scene of Nick trying to order the tickets and having problems? How about showing us how the two of them just up and leave, the next day, from whatever they had going on in their lives, (like jobs?) While not a great movie, this is something that at least Couples Retreat remembered to do, showing us who would be watching the kids of Vince Vaughn and Malin Ackerman, when Vaughn’s father just showed up at the house, having been secretly called by the kids. But Murder Mystery makes no attempt to show us how they end up going away so fast. Instead, the next thing we know, we are at the airport heading towards a plane.

Luckily there are some funny moments here, including Nick asking about Sky Miles, even though for all he knows they are from another airline, and him asking if they can sit in first class, saying he tried calling about it and nobody answered. And then it’s onto the plane, with some banter between the couple about Nick putting his chair back, and Audrey trying to get earphones from the stewardess. When Nick is fast asleep and she needs to get up and move away, Audrey wanders into first class where she meets Charles Cavenoff, (Luck Evans,) a wealthy celebrity from England, and hits it off with him. Nice wakes up, uses his police badge to get into first class, and joins the conversation. He thinks Cavenoff has offered to pay for sleeping with his wife, (Indecent Proposal style.) Nick soon learns that what Cavenoff has actually proposed is that the two of them come with him on his Uncle’s yacht for a wedding. Nothing like randomly inviting strangers. This is another part of the movie, (like how quickly they left for Italy, the very next day after Nick telling her about the tickets,) that doesn’t quite add up. But we go with it.

Audrey and Nick meet up in the bathroom to discuss whether or not to go. There’s no reason why they have to be meeting in this location, (why does the conversation have to be so secretive?) and it’s clearly just meant for comedy, with Nick thinking they are about to join the mile high club. It doesn’t work. In fact, the humor generally starts to work less and less starting at around this point. They end up going on the yacht and Nick and Audrey have a conversation about an Asian girl they come across and what language she might speak, while standing right next to her. Of course she heard them and responds. This stuff isn’t funny, it’s just obvious. Good humor is funny because it is unpredictable and not what we would expect. This movie never really has that going on, but it certainly was more funny when it focussed on the relationship between our two leads, and less funny as it gets into the mystery.

And so the mystery starts. It begins when they are all on the yacht, and have met the different guests who are attending the wedding. These are people from all walks of life, very much in line with a Murder on the Orient Express kind of thing. There’s a Maharaj, (Arabic royalty,) who does business with the wealthy tycoon, that is Cavenoff’s Uncle. Then there’s a seductress actress, a race car driver who does not speak English, a former general with one eye and one fake hand (an homage to Happy Gilmore,) and his bodyguard, a big bearded man who doesn’t speak. If this cast of characters resembles the eclectic group in movies such as Clue, it’s no coincidence. And they are all here for the wedding of the Uncle.

Only before the wedding, the Uncle (played by Terrence Stamp,) declares that he is cutting them all out of his will, and leaving it all to his new bride. Just then the lights go out, and when they flash on again, the Uncle is lying dead on the floor. Yep, right out of Clue. But that’s okay. This movie is meant to be a version of those other films, and makes no bones about it, (the name on the train at the end, the title of the movie itself.) So now it’s time to figure out who did it. Nick, still clinging to the lie that he is a detective, steps up and starts working the case. And that night, on the ship, there is another murder. Soon the characters make it to land and reach a hotel, where there are more murders.

The constant changing of locations, (first a plan, then a yacht, then a hotel, and lastly a mansion,) is an interesting touch for this movie. The general pattern for movies in this genre are to take place in a single location, usually a mansion, during a single night. We’re talking about everything from Clue to And Then There Were None to The Exterminating Angel. And this Sandler movie has the idea to take all of the different kinds of locations they might end up in, and throw them into one film. It’s certainly different, but not necessarily a good thing. If the whole movie took place on the yacht, or in the hotel, for example, it might have been better. We could have gotten to know the layout of the hotel and experience things like secret passages, that never really come into play here. But for what this movie is, it’s not bad. Sure, we’ve seen it all before, and there really isn’t anything especially creative on the table here, but it’s certainly the best thing Sandler’s done in a while, and it is entertaining. Sometimes, that is all you need.