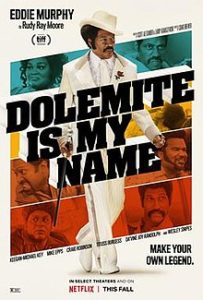 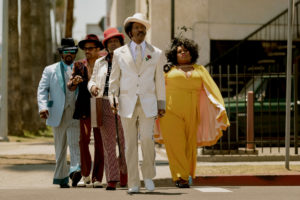 A very lively and fun movie that really covers all facets of the man who went from being a hustler to becoming a movie star.

A pretty great movie on all fronts, Dolemite is My Name tells the story of Rudy Ray Moore and his rise to success, by covering every angle of his story. Not many movies go into this much detail about the process of something. And if they do, then it’s about the process of that single thing, and nothing more. This movie explains how Moore rose up from working at a record store to coming up with stand up material to creating a stand up persona, to recording a comedy album,, to making a movie. Ans exactly how all that comes to be is really explored. So regarding the making of the movie, for example, we don’t just see them making it, but instead watch all of the steps involved to finding the right talent for each position, from the writer to the director to the stars. On top of all that great detail, the movie is also incredibly interesting and funny. This one is a real winner.

Dolemite is My Name is a pretty great movie. It’s a film that really goes to town with telling the story of a guy who worked at a record store by day, trying to hustle and get his records played, all the way through his becoming a sort fo movie star. And it’s not a quick or simple journey. This one takes us through every move he makes, every meeting he has, and exactly how all the pieces come together. There’s. great story here, and a colorful bunch of characters. After all, this is the story of the making of one of the first and most popular Blaxpoitation movies. So the potential for a good story was there all along, but there were also so many ways this movie could have gone wrong…. if it relied too much on comedy, or if the comedy pushed too hard and wasn’t really funny, if it didn’t tell a complete story and instead tried to rush over things… Dolemite is My Name doesn’t do any of those things. It takes it’s time and gets the story right.

The movie starts with Rudy Ray Moore, (Eddie Murphy,) working at the record store where this a live DJ who sits in a booth in a corner (played by Snoop Dog.) The DJ runs a radio station out of the store, and Moore has some songs he recorded that he wants the DJ to play on the air, but the DJ refuses. At the same time, Moore is also working at a comedy club at night. But he isn’t given the time or spot to do a set. Instead, he’s just the MC, welcoming everybody and announcing the comics. Moore asks the owner of the club for the chance to do a set and the owner refuses. So he’s not in a very good spot at the start of the film, only asking for small favors from people (especially the DJ,) and getting rejected everywhere he turns.

Then one day, a homeless man stumbles into the music store and finds a place in a corner to stand up on a platform and start preaching. Only he’s really doing some comedy bits, rhyming lyrics and making people laugh. This catches Moore’s attention. The homeless man talks of this one guy named Dolemite, and tells stories about the character. When he leaves the store, Roy starts thinking and comes up with an idea. He goes and finds that same homeless man in the street that night. and sits down wiht him and his buddies, offering both money and booze. And Roy wants them to just tell him stories. He tecords it all as possible material. And he uses it, spinning it into a character.

Roy shows up to the club the next night dressed as this character, Dolemite, complete with a pimp’s outfit (including a cane,) and a fro that is really a wig. And Moore takes the stage, belting out a set about Dolemite. The audience eats it up. They love it. And so he comes back night after night to do this character, and develops a little following. That’s when Moore decides to make a record and record it himself. He and his buddies set up chairs in someone’s apartment and invite a bunch of their friends. And they pack the place before recording the set. Moore tries to get the record picked up by a record company, but is rejected. And so he sells it himself, out of the trunk of his car, and under the counter, at the record store.

When the record does pretty well and word of mouth about it gets around, a record company calls Moore up. They want to be in business with him. And so Moore agrees. He and his friends celebrate by going out to a movie theater to see an old movie filled with white people who are making jokes that these guys don’t find funny at all. They walk out of the theater all agreeing that the humor in this movie just wasn’t funny. And that’s when they decide to make their own movie. Moore goes to the record company to get money he can use to make it, and they’re not interested. So he asks for an advance on the money he has been and will continue making them. That’s when they tell him if he does this, and the movie is a failure, he will owe them for the rest of his career. Moore takes the gamble and the money and runs with it.

Now it’s time for him and his friends to put the pieces together to make the movie. That means writing a script, but even before that it means hiring a writer. And this movie takes us through that process with having Moore go see a play, and then search the writer in the lobby afterwards. He convinces the writer,  Jerry Jones, (Keegan Michael Key,) to work with him, and the two of them start having evenings together where they write the script. We even get to sit on the conversations with them such as Jones explaining to Moore that you’re supposed to write what you know. And so Jones asks Moore about his life, and Moore starts telling him. The stories and details are perfect. This is what they should be writing, and Jones realizes that he asked the right questions, because it brought out this material which just might be the kind of thing they are looking for.

The next move is hiring a director. The guys are at a strip club one night when they spot a recognizable actor, , D’Uerville Martin (Wesley Snipes,) in a booth with a woman. This guy has been in big movies, (like Rosemary’s Baby,) but he has only been tiny parts. Still he thinks he is way above anyone who is just trying to break into the business. When the guys offer Martin a role in their film, he is offended. Who do these guys think they are and why would he want to be in their movie? But then they offer him the chance to be the director and he accepts. This character is the best that Wesley Snipes has ever played. For the first time in his career, (not counting Too Wong Foo: Thanks For Everything,) Sniper is playing a guy who is not the coolest guy in the room. Here, he’s a jerk, but not the kind who is calm and quiet. Snipes plays the character as a posh elittest, who speaks in proper english and is disgusted by anyone and anything that is not on his level. This is Snipes’ first big movie role in years, and he knocks it out of the park.

With all the pieces in place to make their movie, the crew starts getting things together. There’s the heavyset woman Lady Reed, who Moore befriended while down south, and helped break into the comedy business. She’s on hand as one of the performers. In fact, all of Moore’s friends are on hand. And they rent out a giant old hotel that has been used as a drug den for junkies for years now, (the landlord gladly lets them use it, since they promise to kick all of the junkies out.) Even Jones, the writer, uses his connections to get a bunch of film students from UCLA to come in and do all the technical work, including camera, lighting, and even director of photography. And of course, Martin has a problem with all of this. He has a problem with how young the UCLA students look, how shabby the hotel is, and how nobody there seems to have ever been on a movie set before.

That leads to the shooting of the movie. And the story here goes into detail with some of that. There are a handful of scenes that we really get the breakdown on, watching the before, during, and after. One of these involves a sex scene where Moore is incredibly nervous before shooting. The team turns that scene in comedy with the whole set crashing down on the characters while they are having sex. Another scene that we get to see being filmed in detail involves Dolemite beating up a bunch of policeman who approach him at his car. This is where we get a sampling of Dolemite’s karate, and it’s so bad it’s funny. Only not to Martin. He is so miserable working on this set that when the movie ends he basically tells off the entire cast and crew before walking off.

But the movie is done. Moore has successfully gone from a nobody to a stand up with a popular record to the star of his very own movie. You would think the journey is done, mission accomplished, right? Not so. Here, they still need to get the movie into theaters, and with no studio wanting to buy it, that seems impossible. Then a radio DJ has an idea about holding a private screening, and the rest is history. The crew has to promote the movie themselves, and the screening doesn’t start until midnight, but even still, it is quite a success. Which leads to a stuido wanting to pick it up after all,  and more deals being made. And all of it leads up to the premier. There’s so much going on here, at times it actually feels too long. But then you remember how much this movie is trying to accomplish, and how hard it is working to not cut any corners and give us a full story, and you marvel at how they do such a great job.