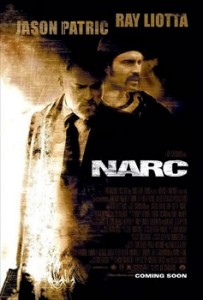 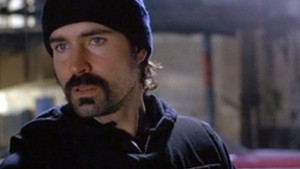 Narc is a very low budget, dark and disturbing police thriller. it’s the kind of movie that calls up tv shows like the wire, where it’s about brutal reality as opposed to telling the same old, cliched story. this movie is about two cops who are thrown together as partners, in large part because both of them have shady pasts. at the start of the movie, we watch jason patrick’s character, nick tellis, chasing down a suspect. we watch the two of them tare through streets, walls, and anything else that gets in their way. and it’s all done with shaky cam., bourne identity-like realism.

well, that opening scene is part of the back story, as tellis ends up not only gunning down the suspect, but also hitting a pregnant woman with one of his shots and causing her to lose the baby. any other movie would have used this for the opening and then gotten to the real case right afterwards. this movie knows that it gave us something pretty powerful for it’s opening and follows it up with scenes of the aftermath. tellis has to sit in front of a board of internal affairs people and justify his actions. and his responses and attitude toward these people, and how they have know idea what it’s like to be in his shoes, is priceless.

after we are done with this opening and examining the consequences of it all, we do meet tellis’ new partner, oak (ray liotta), and learn a little bit about him. oak is a violent guy who was partnered with a man who became an undercover cop. that man, calvess, was found murdered by a couple of junkies on the street. only the cops don’t know which junkies are the ones who did it. and oak is too worked up over the whole thing to be put on the case.

that’s where tellis comes in. it is decided by the powers that be that oak can work the case so long as tellis works it with him. and so the two of them go door to door chasing after clues, trying to piece things together and make sense of what might have happened. the movie takes a very direct approach in it’s first half. these two guys literally follow one clue to the next. they deal with one guy, get a name, and go find that other guy. it’s simple, but it also works. especially since each character they come across is interesting in his own way.

the first guy these two come across refuses to wear pants. he’s going around half naked, insisting that there is something wrong with his dick and trying to get the officers to help. basically, we’re in the comedy portion of the movie. as things get more heated up, the comedy gets left behind. the next guy they come looking for is dead in a tub when they find him. the two of them examine the crime scene very closely and are able to figure out that this guy tried to use a shotgun as a crack pipe and ended up pulling the trigger and killing himself.

the third guy these two come to engages them in a shootout. and it isn’t until after the shootout is over that the two cops realize that this guy has a police badge. is he an undercover cop? this is probably the point where the movie goes from somewhat routine to interesting and mysterious. questions are starting to be raised. if he’s not an undercover cop, then did he kill an officer to get this badge?

the movie is good in it’s first half, but it really comes alive for it’s second half. that’s where we get the rashomon take on the storyline where we get to see the same scene from different angles. the scene is the one where calvess was killed in a tunnel, and now for the first time, we are getting warm to the truth about what might have happened.

there’s no way to go any further without giving things away, but i’ll just say that it’s busta rhymes and a buddy of his who are the next suspects these two comes across, and those two guys don’t get off easy. they are taken to a deserted chop shot and beaten to a pulp by oak, and it’s all in the interest of getting them to talk. there are a lot of possibilities here for what might have happened and we get to hear every one of them.

what also helps this movie maintain it’s interest level is a secret that comes out involving one of the main characters and his relationship to another character. it’s the kind of secret where we’ve been hearing about it all along, since the beginning, but just now are able to figure out exactly what it all meant.

the appeal of Narc is that these two guys who are our protagonists, are hardly good guys. they have no problem beating suspects and doing whatever it takes to get answers out of them. there’s a great moment in the chop shop where busta rhymes tells oak that he wants his lawyer and oak just laughs, saying, “there are no lawyers here. it’s just you and me.” Narc was written and directed by joe carnahan, who is an absolute guys guy director. this is the movie that gave him credibility and made him big and it’s also the best movie he’s made, although the grey, with liam neeson was pretty great too. outside of that, carnahan has had a few missteps like smoking aces and the a team. both movies went more for the comedic approach than for serious gritty storytelling. the grey, on the other hand, is the first movie by carnahan that is similar to Narc. that’s because it is also about only a small handful of characters trapped in a deadly situation that has been stripped down to it’s most basic parts. carnahan is a ver smart director, but he doesn’t always choose the best projects. hopefully the grey, his most recent film, is a sign of the future. he certainly has had a lot of promise as a director ever since he made Narc.