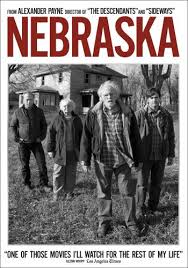 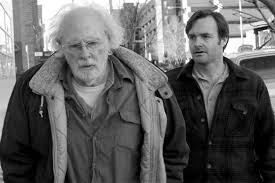 An artisitc movie with a simple plot, but a wonderfully smart and creative ending.

This is a good movie that is just a little too slow. It’s funny at times, and artistic as hell, but the plot needs a certain charge of energy and it doesn’t really get that until the film starts heading for the end. The premise here is that an older man thinks he won some big prize money and is determined to go and get it. That means he’s walking there, since nobody seems to want to drive him. After a number of failed attempts, one of his sons drives him, and they arrive in a town where the old man grew up. Now everybody starts coming out of the woodwork, looking for a hand out. Nothing about this story seems incredibly original. Luckily it does find a pretty brilliant ending, but at that point it’s a little too late. The movie is enjoyable, based on the actors and characters and humor, but it definitely takes patience.

Nebraska is the latest and definitely the most experimental movie by director Alexander Payne. This is the guy who started off with movies like Citizen Ruth and Election and found himself getting bigger and bigger stars with each new turn. Payne is a remarkably fresh and original filmmaker. He’s a guy who was really motivated to make interesting films, when he got his start in the nineties and early 2000s. Payne went from Election to About Schmidt to Sideways. Then, for the first time, he ventured into territory that was somewhat familiar when he made The Descendents. Like Shmidt, this film shared the similar plot of a man who found out his wife was cheating on him only after she passed away. Despite that familiarity, Payne managed to find another angle (the land barron situation), to make the movie still feel original.

With Nebraska, Payne is working off the cuff, trying his hand at his lowest budget film to date. He’s making an all-out brave attempt to show that he’s still got it. Not that this man has ever made anything bad. The Descendents was a good movie, and it’s his least original film yet. Still, it was one of the better movies of its year. But still, Payne is determined to try something new, and that’s what Nebraska represents for him. Making this movie is the kind of thing you would expect a director like Steven Soderbergh to do (like when he made the movie Bubble, with no stars, after winning the best director Oscar for Traffic.) Doing something like this is the equivalent of a movie star going from a major film to a small theater production on Broadway. It’s something to showcase that the person still has raw talent and indie cred. If that’s the goal, then for Payne, this movie definitely does the trick.

Not only is Nebraska made to look simple, (being filmed in black and white and set in a small town,) but it also really does have a very simple plot. This is the film of an older man named Woody (Bruce Dern,) who thinks he won a million dollars and plans to go and pick it up. Woody has gotten a letter in the mail that says he’s a winner, and that he needs to go to Nebraska to receive his prize. At the start of the film, he is found walking along the side of the highway by the local sheriff. When asked where he is going, Woody says “Nebraska.” Now just to be clear, Woody and his family live in Montana, and Nebraska is two days away by car. Woody was planning to walk. We get the sense later on that it’s not so much that this man is crazy as that nobody was willing to drive him. For Woody, walking was the only way.

The sheriff brings Woody into the station and calls the old man’s son, David (Will Forte.) David comes to get him, asks his dad where he was going, and we learn all about the prize letter. David immediately tries to explain to his father that the whole thing is a hoax. Woody doesn’t say much or argue, and so David let’s the topic go. They continue on with their lives and we see David at work, trying to sell stereos and looking pretty miserable. It’s one of those jobs where you basically have to kiss the butt of the customers. Things might seem back to normal for the moment, but Woody hasn’t given up on his big walking idea.

When he tries again, we follow David back to the house to see that Woody is in the garage with his other son. This is Ross,(Bob odenkirk), and he’s in there, talking to his father about the problem.  Ross is pretty much having the same conversation with his father that David already had. The interesting scene comes when the two sons get to talk with each other, outside of the house, and we learn a little bit about Ross and his recent promotion as a News anchor. This is all just establishing a little bit about the characters. It certainly doesn’t drive the plot at all.

We also meet David’s ex-girlfriend in one scene, when she comes by to return some things to him. The two of them just broke up, and David is temporarily living in a motel. All of this is handled with the light hearted, delicate touch of a Coen Brothers movie (meaning it is artistic and interesting and funny in a black comedy way), but it also doesn’t exactly advance the story. We don’t mind, because the scene is humorous, but at a certain point, this story really needs to get going, and it sure takes a while to do that.

Eventually, when David realizes that Woody is just going to keep on trying to walk to Nebraska, and that there is no convincing him of otherwise, David decides to just drive him. The movie takes them on a road trip where they stop off overnight at a motel and Woody gets drunk at the local bar. He walks into the motel room, with David fast asleep, and Woody crashes to the floor, busting his head on the counter. He ends up with a big cut, and that’s how he looks when they ride into town the next day to get closer to the area where they can stop by and find out about the potential winnings.

The remainder of this movie pretty much takes place in this town. Woody grew up here and knows most of the locals. He sits down at a bar with se of his old friends and tells them all about his winnings. David told him not to let anyone know about this, but Woody couldn’t help himself. This was his moment to shine, and he wasn’t gonna pass it up. Right away, the people at the bar are announcing that the next round for everyone is on Woody. And just like that, the next thing you know, Woody is the talk of the town. Everywhere he goes, people start approaching him as if he’s a celebrity. Even the town newspaper writes a story about him, and sends a boy over to his house to take his picture.

Pretty soon people stop being so nice about having this guy in their town and let their real feelings come out. Basically everybody wants a piece of the pie. Woody has a lot of history in this town, and everybody that he has had experiences with seems to think that he owes them soemthing. At first it’s just his former partner,  Ed Pegrum, (Stacy Keach.) This guy is menacing, even in his old age, and he makes threats to David and his family. Soon it is all kinds of family members of Woody’s who claim that they took Woody in and that they are owed money because of how much they spent on taking care of him. When Woody’s wife arrives in town, things start to get interesting. She puts a whole bunch of these family members in their place. She also has a great scene where she walks through the cemetary with Woody and David and talks trash about a whole bunch of deceiced family members of Woody’s. All of this makes David feel bad for his father, which leads to a pretty remarkable ending.

There’s no question that the ending is terrific, and really solves a problem where there seems like there would be no good solution. But it’s not enough. The movie needed more than just a great ending. And it’s not that the film was bad up until that point, it was just a little too slow and void of much of a plot. Maybe if the movie hadn’t spent so much time at the beginning on establishing character qualities that were irrelevant, things would have been better. And maybe those qualities weren’t as irrelevant as they seemed. For example, meeting David’s wife, and seeing his failure, might tell us how David sees himself in his father, and what life might be like for him when he is older. And the movie does get better as it goes on, including a sort of climax where David and Woody get robbed. But still, there does seem to be something missing, that could have pushed this movie a little further. It’s a good film, but a little too simple.