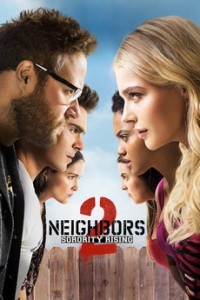 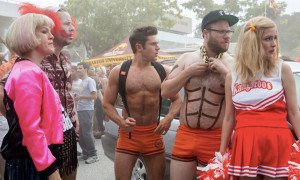 Not a bad movie, with a couple of laughs and a decent plot, this one is ok, but it is certainly nothing special.

This movie is better than it looks. The trailers make it look like this will be the exact same thing as the first film (talk about lousy marketing,) but as it happens, this movie has s couple of ideas of its own. Mostly surrounding the Teddy character, (Zack Efron,) the kid who terrorized Mac (Seth Rogen,) and his family in the last film. The storyline does feel familiar, but you go to a movie like this for the jokes more then for the story, and there are definitely some laughs . There’s nothing great about this movie, but for a light hearted, decent time, you could do a whole lot worse.

Neighbors 2 is an okay movie. I suppose it is actually better than it looks, which is only to say that it looks awful. The movies looks like it takes all the same ideas from the original film and then recycles them again. Instead of a fraternity, it’s a sorority that moves in next to this family, and drives them nuts. And so what do they do? Recruit Teddy Sanders, (Zach Efron,) the kid who terrorized them in the first movie, to now help them out.

Luckily there’s more to the plot than this. The husband and wife team of Mac and Kelly (Seth Rogen and Rose Byrne,) aren’t just annoyed by their new neighbors. They have an even bigger problem now. They are trying to sell their house, already have buyers lined up, and just need to get through a period of time where the buyers can still back out.

That period of time is called Escroll. This movie carefully explains what it means. When Mac asks his agent, “do we have Escroll on the house we are buying then?” We get a really funny moment of her setting him straight in the whole situation.

Meanwhile, this sorority gets started because a girl named Shelby, (Chloe Grace Moretz,) is unhappy with her choices of sororities that are already out there. They can’t smoke weed in their house, and they can’t throw parties. Apparently it’s a college campus rule that only frats can throw parties, and sororities can’t. So the girls of sororities have to go to frat houses to party.

This inspires Shelby and a couple of girls she meets to start their own sorority off campus. and that brings us to Teddy. He’s hanging out with his old college buddies from the last movie, (Dave Franco, Chris Mintz Pilasse,) when one of them proposes to another. Suddenly Teddy finds himself being asked to move out. This leads to him going for a very funny, barefoot, run through the streets.

When the girls go to look at a house to rent for their sorority, Teddy is there, in the house, sitting in a chair by himself.  It looks like they won’t be able to afford the place until Teddy steps in and tells them about filling buckets up with money whenever they have a party, and then using that money to pay thrust rent. He offers to stay on, and live at the house with them and help them manage their books. The girls accept.

This leads to Teddy having a run-in with his old neighbors. He walks over to the front yard of Mac and Kelly and tells them how hard it is for him to get s job with s criminal record, (which he got from the last movie.) He’s angry with these two, and his plan is to help the girls deal with them.

That all starts when the girls refuse to stop having parties, (claiming it’s the reason why they started a sorority to begin with,) and then Msc and Kelly call up Shelby’s father. This is just like the mole being sent in scene in the first movie, where Mac and Kelly send in  spy  (in that movie it was a kid who wanted to join,) and then the enemy turns this person against those thi sent him. The scene end with Shelby telling her new neighbors, “it’s on.”

But the pranks aren’t really that great. In fact they are one of the major ways that this movie is lacking. Used tampinsampons bring thrown at the window, and a bunch of girls in bikinis attacking Msc as he tries to get to his car to go to work. That’s about it. When the girls need more money, they decide to sell weed. This is too much for Teddy. When he complains, the girls kick him out. That’s when Teddy goes over to the other side and joins Mac and Kelly.

Neighbors 2 definitely has some funny moments,. The friends posing as Hasidic Jews dancing around outside the window to get buyers interested in the house. The way Mac is able to sniff out which garbage bag has weed in it, as if he’s got robot vision and then how it lights up and makes noise like he’s in a video game, “420!” The poop bucket situation, where Mac really only seems to be pooping because the bucket is there and Shelby told them about it. Things like that. Mac and Teddy are definitely the funny ones here. The girls of the sorority are not. But that’s ok. They’re the ones who really have the plot in this movie, about being different and starting up a sorority from scratch. This is hardly a great movie, but as far as decent comedies that have a few laughs go, this ones not bad.