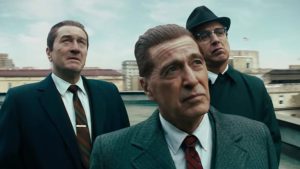 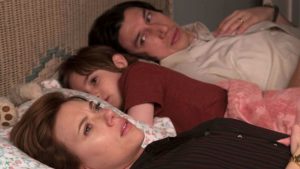 What a year for Netflix. Just when it might have seemed like the streaming giant had finally met its match, with Disney Plus coming in and swooping up all of its best content, (The Marvel movies and the Star Wars movies,) Netflix comes back swinging. Hard. And the way they do this is by having tons of fresh and new Oscar contending material.

Last year, one of the top Oscar nominated movies was Roma, a Netflix film. That movie was artsy, black and white, and even subtitled. And Netflix still made it work in ways that a studio releasing it in theaters would never have been able to. Let’s put it this way… toms of people who would never have paid money to go see it in a theater were now able to check it out.

Now that was Netflix’s first time jumping into the big leagues. That was them really getting into the game for the first time. Before that, their content was more poppy and fluff material like Bird Box or Bright. But Roma took the studio in a whole new direction. And afterwards, they saw the light. If they could consistently put out material worthy of Oscar nominations, than they could find a new reason to appeal to customers. And they figured it out just in time.

So Netflix crafted a plan. They put together a package of four movies all to be released on the streaming service within about four months of each other… My Name is Dolemite, The Irishman, Marriage Story, and The Two Popes. The plan was to save these four movies for the time of the year when two different things were lining up… the Oscars, and the start of streaming service a Disney Plus. And so that’s exactly what Netflix did.

Now don’t get me wrong. They’ve still got their pop-fluff content. While all of these movies were being released, they also released the new Ryan Reynolds – Michael Bay directed movie 6 Underground. But the Oscar movies are where they’re getting people’s attention, and it’s pretty fantastic. The Irishman and Marriage Story are surefire contenders in the race. And The Two Popes should make some appearances as well, (whereas My Name is Dolemite most likely will not.) If this works the way it seems like it might, then Netflix might have found a very interesting way to dig itself out of a hole right before it fell in it. This all might seem like a last second save of the day, avoiding of a field of land mines, but the truth is, there was nothing last second about it. Netflix saved these movies for this time of the year for a reason. They saw what was coming, formulated a plan, and then executed it flawlessly. And now we, the subscribers, get to reap the benefits and rewards.