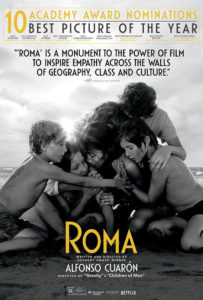 Something interesting has been going on lately, ever since this past year’s Oscars. Steven Spielberg, the great director, who is basically Mr. Hollywood, has taken it upon himself to declare war against Netflix and other streaming services, when it comes to the Academy Awards. Nobody can argue with Spielberg’s reputation, prestige, or credibility. But this move he’s currently making, of taking on the streaming giants, is most definitely questionable.

As someone who met Spielberg at the Cloisters Museum in New York, and had a very positive experience with him, while surrounded by a group of children (not what you go to the Cloisters for, as the place is known for its peace and quiet,) I can say that the man is extremely humble and friendly. But none of that explains what’s going on now with him against the popular streaming services, (Netflix, Amazon, Hulu.) This past year, at the Oscars, the Netflix original movie, Roma, cleaned up. It didn’t win in the best picture or acting categories, but it certainly was nominated in those and in contention. And it did take home the Oscar for director, as well as a number of other smaller prizes. And that sort of thing gets people like Spielberg talking.

You see, the  problem is that with Oscar caliber movies, going straight to streaming, it’s giving people one more reason to stay home and not go to the theaters. That’s Spielberg’s reasoning, anyway. And it is certainly true. Imagine that next year or the year after, half the movies nominated come from streaming services. The playing field will be very different from anything that we have ever seen before. And the box office of how much money studio movies released in theaters are making will most likely decline. But this is the way life works. Survival of the fittest. Only the strong survive. If you can offer something that your competition can’t, then you will succeed where they don’t. Just look at how Netflix put Blockbuster out of business and Amazon is doing the same thing now with tons of retail stores closing their doors. It may sound mean or unfair, but it’s the way the world works, and it’s the reason why competition is actually a very good thing… it leads to better products.

And lets not kid ourselves here, thinking that Spielberg is looking out for the little guy. There is no “little guy,” in this race. It’s Netflix or it’s the studios, and both are doing just fine. But what Speilberg is doing is trying to stay ahead of things by seeing what is to come and trying to hold it back. Much as I love the guy, there is certainly some greed at play here. Do you know that Speilberg tried to stop DVDs from being sold in the nineties because he wanted people to have to pay for his movies each time they watched them? He proposed something where if you “bought,” one of his movies, you were actually only buying it for a temporary amount of time, like three weeks. I think the world is certainly glad he didn’t win that battle.

Regarding the Netflix “controversy,” Spielberg just might be on the wrong side of the situation. For example, who’s stopping him from making a Netflix movie himself? Nobody. His buddy Martin Scorcese is doing exactly that, right now, with the Irishman, a movie that re-teams Robert DeNiro, Al Pacino, Harvey Ketiel and even Joe Pesci with director Scorcese. That movie is bound to get prestige and acclaim and to turn people’s heads, just for the casting alone. But the movie also employs a massive amount of de-aging, a technique that the Marvel movies perfected, (Ant Man, Captain America: Civil War, Guardians of the Galaxy Volume 2, and most notably with Samuel L. Jackson throughout the duration of the film in Captain Marvel.)

Getting back to the great streaming service-oscars debate, Spielberg might have a point, but it isn’t necessarily the right one. Maybe movies in the box office don’t do as well. And maybe there are positive consequences to come out of that. For example, maybe the movies released in theaters start getting better. Maybe studios start getting more selective about what they put out. And maybe movie theaters find other ways to make improvements and draw people in, (right now, the AMC A List program is especially successful, and it couldn’t have happened without Movie Pass paving the way, despite all of that original service’s flaws and blunders.)

The problem with Spielberg’s argument is that it is limiting and hindering progress. It’s being not inclusive at a time when those who are on the right side of things know that everyone should have a fair chance to be invited to the party. It’s extreme to compare this to Civil Rights, or something like that, but the idea that some movie making companies shouldn’t be in contention, no matter how good their products are, doesn’t exactly feel nice either or accepting either. Spielberg says that Netflix movies are the equivalent of TV movies. Not when you have things like Roma or Bird Box being made. Not when you have Triple Frontier, The Ballad of Buster Scruggs, and Mudbound. And not when you have the Irishman. Netflix is here to stay and here’s hoping their movies get better and better to the point where they do have lots of films nominated in the near future. Progress should not be limited in any way, and if that means the products being turned out get better, then at the end of the day, we all benefit.