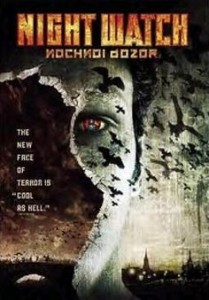 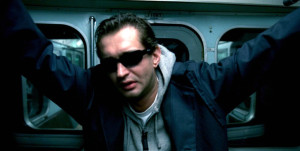 A very complex, strange vampire movie that digs into the history between two warring clans, just like Underworld, but doesn’t make it’s storyline nearly as clear.

Night Watch is a tricky movie to follow, filled with complex ideas, other worldly history, and details that are so fast moving and strange, we are often uncertain of what exactly happened. we don’t always know what we’re watching, but we know it’s kind of cool. the premise seems to be that there are two different clans of vampires, the night watchers and the day watchers, and they continually watch over each other, policing the other clan’s actions.

That much is made clear to us in the opening scene which goes back thousands of years to an ancient battle on a bridge. the leader of one of the clans freezes time because he knows that most of the warriors in both armies will die before one of the sides wins. the two armies are pretty evenly matched, and instead of fighting it out, he decides to call a truce. the truce is decided on the terms that the two clans will coexist, until the day when the chosen one comes and decides on a side that he will take. this chosen one has the power to make that side win the ongoing battle.

the night watch force is shocked to learn that this man, anton, (played by a guy who looks like a russian jason segal), can see them. clearly he is an other too, (someone with some kind of special ability.) every other has their own special power. some, for example, are shape shifters and transform into animals.

the night watch team takes anton in and makes him join team, although we don’t really see any of this, we just flash forward about eight years or so, and suddenly he’s on the night watch side. Unfortunately, now is when the movie starts to become confusing. it’s still very early on, there have really been only two scenes, the bridge battle and the witch ceremony, and now suddenly we are eight years in the future. in fact, each of the first three scenes takes place in a different time. the first took place thousands of years ago, then eight years ago, and now present day. that should shed some light on why this movie is a little tricky to follow.

anton now is on a mission to find the chosen one, who is currently hearing the call. the chosen one is a boy, who we see swimming in a pool and bleeding from his nose. anton sets out to find him, and almost does, on an underground subway train. but he’s distracted by a woman who for some reason catches his attention, and the next thing you know, the kid is gone.

Anton finds him again when he comes upon two vampires who are trying to kill a boy. he can only see the vampires in a mirror, and so he carries around a shard of glass to see him in. this is a cool touch. Anton ends up saving the boy, with the other night watch members showing up and blasting the vampire with their ultra flashlight, and killing him. but the vampire’s girlfriend gets away, and that’s going to be a problem.

another problem is that a vortex has been opened which can end the world and bring about the apocalypse. this is another legend story that gets told to anton, about a woman who is cursed and as a result everything around her dies. children in homes she goes to visit, dogs that she pets, birds that feed from her hand, all of them. anton has to find her and stop the curse by finding out who cursed her. and while he’s trying to do that, the world is going to hell all around him. massive storms fill the air, explosions happen in the background, black birds fill the skies, and a plane is about to crash into the earth.

there’s a lot going on in this movie. and it doesn’t pander to those who need a simple story. instead, it’s more like the matrix, in that a whole world has been created here. and the way the movie is filmed is pretty remarkable. there are the rapid speed shots that go into small places, such as following a wire through a wall, or diving into a car engine when the car is turned on. there’s also the end of the world…cursed building kind of ghostbusters situation where the vortex opens up right on top of a building with hundreds of black birds pouring out of it.

this movie is really creative and fun. Anton gets a partner who is an owl woman. and the way he gets her is the guy who gives her to him takes an owl statue out of a wooden box and throws it out the window. the owl comes to life and flies around in the night sky. later on, it sits in anton’s apartment with him and turns into a woman. that’s the kind of crazy stuff that this movie is made of. another one has a guy remove his backbone from his body and use it as a sword. there are outrageous things going on here, but there’s also a smart plot that includes cool twists at the end. it’s a hell of a movie, but it certainly takes a lot to get it. the first time i saw it, i could barely follow it at all. then i read about it, and then watched it again. it’s that kind of movie. great if you understand it, but certainly something that takes effort. that being said, it’s a hell of a cool film.