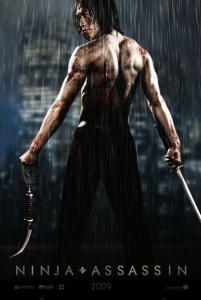 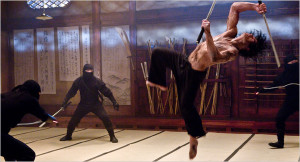 The story is nothing special, but the action, with all of it’s blood spurting state of the art technology, happens to be a lot of fun.

Ninja Assassin is in no way a great or even unique movie. it’s plot seems rehashed, and it’s characters are one-noted. but it’s action is certainly a lot of fun. from the very first scene as an old man colors in the tattoo of a punk leader of an asian gang, the movie is working on it’s setup. the old man tells a story of ninjas and then the ninjas attack. chinese stars come flying from all directions, slicing the gang members into pieces, and blood spurts everywhere. the end scene of kill bill: volume 1, at the house of blue leaves, had a lot of violence, a lot of severed body parts, and a lot of gushing blood. Ninja Assassin just might has it beat.

we leave this first attack and meet raizo at a laundromat, helping a woman fold her sheet. she turns out to be an assassin and they fight it out. so far we are two for two. Two scenes that start in a nice, unsuspecting moment and then explode into surprising action.

After Raizo, we meet Detective mika, played by the great naomi harris. this actress was so great in 28 days later, nearly a decade ago, but has been cast off into lousy parts of big budget movies ever since. she was in the two pirates of the caribbean sequels and also in miami vice. all three movies stunk. here, in Ninja Assassin, she might not be doing quality work, but at least it’s enjoyable, and the best thing she’s done in a while.

mika is investigation a ring of Ninja Assassinations. she looks into an fbi man who was running a similar investigation before he was killed. he even knew to put up lights everywhere around his house, claiming that there could be no shadows. of course the ninjas just broke all those lights before they came to kill him.

We spend most of the movie either with mika and her boss running their investigation, or else with raizo as he sees flashbacks to his youth in the ninja training camp. there we meet the father figure and leader of the clan. We watch as he puts his son’s through brutal training, including striking their feet until they bleed if they make any sound walking on the wooden floor. when a girl who is training with them refuses to cut her opponent, the father takes the knife and cuts her in the face instead.

this girl is branded as a traitor and put into a holding cell, yet raizo develops a friendship with her. she tries to escape and is caught and murdered. later on, raizo stands on a roof surrounded by ninjas and like this girl, is given the order to harm somebody. instead, raizo takes his weapon and strikes the master across the face, leaving a similar mark to the one the master left on the girl. this is how raizo ends up leaving the ninja clan.

when we come out of the flashbacks, we are with mika and raizo as they meet and join forces. He protects her when they come to her apartment to attack. that fight is completely in the shadows. and then she calls her boss up and tells him raizo is working with her, and the boss ends up betraying her and bringing him in.

that’s when the ninjas make their big attack. raizo is able to get free and fight them off, but not before they kill a whole bunch of swat task force members. this scene is at some sort of abandoned warehouse and it spills out into the streets as cars whizz by, nearly hitting the ninjas who are chasing after raizo. in many cases, the cars collide with each other and sometimes they do even hit a ninja or two.

the movie goes to the ninja training facility or hideout for the climax. this is where the master is holed up, and it’s also where the ninjas bring raizo, their prisoner, who they plan to kill. and it is here that the fbi and swat task force attacks. the climax is pretty amazing. on the hand, you have ninjas running around on the rooftops. then you have swat members firing all sorts of guns at them. and then, inside the hideout, you have raizo duking it out with whoever comes across his way. i love that the movie gave him some significant fights inside the building during this climax and didn’t just rely on the swat vs ninjas idea to serve as its ending.

Ninja Assassin was made by james mcteague as his second film and follow up to v for vendetta. it’s not half as ambitious as that movie and doesn’t really try to be. it’s a b movie, filled with all of the bloody hardcore action one could ever want. mcteague was the director of photography on the matrix movies and he really is an action director. in v for vendetta, the action got bogged down by the storyline. in Ninja Assassin, he makes up for it. the action in this movie is absolutely stellar and fun, and that is really the reason to see this film.