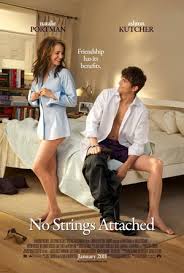 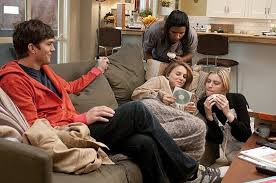 A very simple and predictable movie that offers no surprises or creativity whatsoever.

No Strings attached is the movie that really does have nothing to offer other than one or two decent laughs. It’s the movie that takes the exact same premise every other studio is using to put a movie out with these days, and then trims it so that it is just the clichéd part and nothing more. It’s not that the movie is clunky or painful to watch or anything, it’s just that there is nothing to take away from it. I mean, a dad who starts dating his son’s ex-girlfriend? C’mon.

The premise is that two young people, Adam (Ashton Kutcher) and Emma (Natalie Portman) meet at camp when they are just kids, and then continue to meet randomly a couple of times throughout the years. The next time they meet is one of the funnier moments in the movie, with Emma inviting Adam to her grandfather’s funeral only not telling him that that’s where they’re going, so that Adam ends up wearing a yellow outfit and looks ridiculous standing over the coffin. as funny as that image is, there are still so many questions and reasons why it is also pretty stupid. would she really just randomly invite this guy to a funeral who she barely even knows? And would she really invite him to go out and not mention to him that it was to a funeral? Is this just a mean joke to embarrass him? The movie doesn’t ask or answer any of these questions.

the two characters meet again, years later, when they are each walking through a market with a friend and the two friends recognize each other. that’s when Adam and Emma see each other too and can’t believe it. they exchange numbers and finally start dating. only not really because Emma doesn’t want a relationship. so instead they are just fuck buddies or friends with benefits. and that is what the essential premise of the movie will be.

The problem is that we have seen this movie a thousand times before and it has always handled better than this. A few years back there was 500 Days of summer, which handled the situation with not only creative comedy scenarios, but also realistic approaches that allowed you to feel what the character was feeling and understand his mentality. That movie took this premise as far as it could go.

That was in 2009. The next year, 2010, (last year), we got the Jake Gylenhaal – Anne Hathaway version of the premise in the movie love and other drugs. Again, he wanted the relationship, she did not. this time it was because she had a disease. That movie was not as good as 500 Days Of Summer, but it had things going for it too, such as Gylenhaal’s job selling pharmaceutical drugs to doctors.

Cut to A Year later and we have no strings attached, featuring Ashton Kutcher, who is one of the most annoying actors in the world, and Natalie Portman, fresh off her Oscar win for black swan and for some reason taking every movie she can. she needs to be selective. The Oscar pedestal is an easy place to fall off of. just ask Cuba Gooding Jr.

Both Adam and Emma do have friends who they spend some time with, and if the friends had more than one dimension, that might have been helpful. one of Emma’s friends is the Indian girl who plays Kelly on the office, Mindy Kaling. I’ve been told that this girl is a comedy writer too and writes some things for the office. I figured with this movie, at the very least, she would be funny. I was wrong.

Kevin Kline isn’t funny at all either. he plays Adam’s father, the guy who starts dating Adam’s ex-girlfriend. that might be something that is supposed to be funny, but in reality it’s disgusting on all kinds of levels. and for the movie, other than a cheap laugh, all it does is give Adam the opportunity towards the end to tell each of them what an awful person they are. I was okay with it when he said it to the girl, but then he just goes and says the exact same thing to his father. did the movie even realize that it was repeating itself? Did it even care?

To be fair, there are some funny moments. Adam makes Emma a period mix and the girls sit around reading the names of the songs. things like Even Flow and Red Red Wine. another moment has her show up with a bouquet of carrots since she doesn’t like flowers. and still another has him bring her a balloon that says “congrats” after they had sex. that’s probably the funniest moment in the movie, especially when people start asking Adam about it afterwards. “did you really bring a girl a balloon that said congrats after you had sex with her?” But these laughs are very few when given a movie that has no interest in being creative at all. It really is the same old thing here, only without any attempts at giving us something even a little bit unique.