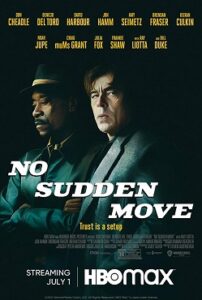 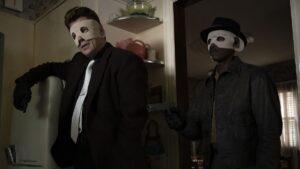 A pretty cool crime thriller that takes lots of work to fully understand, this one is a project and is only for those willing to play the game and put in the effort.

No Sudden Move is not a guilty pleasure movie. It’s not an easy, mindless film. This is Steven Soderbergh, which means it takes work. Unlike the Oceans movies, which were more campy than they were smart (except for the first Oceans’ film, which was actually a good movie all around,) this one takes work. It takes patience and even more so, effort to put the pieces together and keep track of names. That’s the number one way to experience this movie and enjoy it… keep track of names. You see, like some classic film noirs (such as The Big Sleep,) there are far too many characters in this movie. And far too many names of characters who we don’t actually meet for a long, long time, and yet who keep on getting mentioned.

The good news is, on a second viewing this movie goes down much easier. You see, on a second viewing, we actually know who the characters are and can put a face to each name, which makes them that much easier to remember and to know who are they are actually talking about. So this review is actually from the perspective of a second viewing. Which is not the ideal way to write a review. But, to put it simply, the experience of watching this movie is completely different on a first viewing versus a second viewing. On a first viewing, the movie feels long, tiring, slow, and uneventful. It seems to be all dialogue with very little action. And it seems impossible to follow all of the names. Trying so hard and being confused so much just makes the viewer stop caring.

But on a second viewing, boy is this a different film. Leave it to Soderbergh, one of the smartest filmmakers working today to craft something like this, which really requires the viewer to pay attention and get his / her hands dirty, digging away at this thing. Soderbergh made some pretty great films in his hey day (late nineties to early two thousands.) From Out of Sight to Traffic to Erin Brokovich, this guy proved that he could do it all. And then he kind of lost his way. He became too indie of a director, making movies that went a little too far in terms of how experimental they were. We’re talking about movies like Full Frontal, Bubble, The Good German, and Haywire. Soderbergh definitely has a style all to his own at this point, which is to say that his movies are generally pretty smart and witty, and not always the easiest to follow. No Sudden Move fits right along with that pattern, and with his style.

The movie was originally titled Kill Switch, and it probably should have kept that title. No Sudden Move just sounds as generic as it gets, and is instantly a forgettable name. Too bad, because with this all-star cast, and this clever little story, it’s actually a pretty good film. The movie stars Don Cheadle, Benecio Del Torro, David Harbour, John Hamm, Ray Liotta, Brendan Frasier, and Kieran Culkin. It also features another big name star in a cameo, but I won’t reveal who that is here. It’s a sizable part though, for a cameo, having more than one scene, and monologues as well. But there’s no denying that this is an excellent cast, even without that secret star addition. And the cast delivers, bringing this story which could otherwise be considered kind of quiet and dull, to life.

The movie opens with Curt Goynes (Cheadle) going to a local bar where he hears there’s a man waiting to talk to him about a job. Goynes goes to the back alley, gets into a car, and meets Doug Jones (Frasier,) who offers him a gig. He and two other men will need to babysit the family of a man who has to go into his office and retrieve something for them. In other words, the family will be held hostage in order to get this man to do what they want, and Goynes will be one of the men holding them hostage. That’s the simple premise for starters. Do we know who Jones is working for? No. Neither does anybody else apparently, and it’s a question that Goynes keeps asking. We also don’t know what the object is that this man, Matt (Harbour,) will be retrieving from his office, and why it is so important. But we go along for the ride and meet Ronald (Del Torro,) one of the two other guys doing the job. Then we meet the third guy, Charlie (Kulken.) Now we’ve got our trio and it’s time to get to work.

The holding of the hostages goes pretty smoothly for most of the way through. There are no attacks or acts of defiance. Which means as we approach the thirty minute mark of so, no action of any kind has actually happened. It’s just been characters talking, holding guns on each other and talking, or talking about how they don’t know who they are working for, but throw out names of possibilities. It’s at around this point that we realize there are two characters here who we keep hearing mentioned over and over again, and who we don’t seem to be meeting. There’s Frank (Liotta,) and Aldrich Watkins (Bill Duke.) They are mentioned often enough that you would think they were main characters here, but with no faces to put to the names, keeping track of who is who just becomes a mess.

When the family hostage job goes horribly wrong in an unexpected way,  Curtis and Ronald find themselves in a situation we’ve seen before. They kill Charlie, the man who was the most connected of the three of them. In any other movie, that would mean that now they are on the run. They were supposed to kill the family, and instead, they killed the guy they were supposed to be in business with. From Scarface to The Replacement Killers to Things to Do In Denver When You’re Dead, we’ve seen this trope so many times before. Only here, the characters don’t go on the run. In fact, just the opposite. They decide to trade up and see how far up the ladder they can take things, knowing that whatever this guy Matt was supposed to get from his office must have been pretty important.

Only Matt didn’t actually get it from his office. He checked the safe of his boss, only to find out that the paperwork he was supposed to retrieve was not actually there. And so Curtis and Ronald decide this item must have value to it, and maybe they can get it another way. So they take Matt along with them and make him go over to his boss’ house, ring the bell, and make the boss give him the paperwork that was in the safe. The boss does not want to hand this over so easily, and so Matt has to actually beat it out of him, in one of the most awkward and funny beat downs in ages. It’s one of those moments that on a first viewing, and even in the trailer, looks kind of silly and stupid, with Matt explaining to his boss that he is about to get punched. But when you think about it, and reflect on it afterwards, you realize how witty it actually is.

Now that our characters have what everyone is looking for, it’s time to trade up. It’s time to see how much they can actually get for this item. And so they go straight to Frank, whose wife Ronald is having an affair with. The characters get Frank (Liotta,) to agree to meet them at a restaurant, and all seems to be going well, until a gun fight breaks out. Doug Jones is there too, for this one, and by the end of the meeting, some more name characters can be added to the kill list (maybe that should have been the name instead of Kill Switch, and certainly instead of No Sudden Move.)

But our characters aren’t done yet. Not by a long shot. They keep trading up until they get a meeting in the luxurious office of a wealthy businessman who is ready to give them a lump sum of money in exchange for the object, which turns out to be a document. We even get the generic bad guy scene where the villain explains his evil plan. Only here, it’s more of the guy who they finally end with (the big boss,) explaining what the document is. All of it works. The dialogue is rich and is delivered nicely. And yes, it’s somewhat anti-climactic, and the movie doesn’t feature enough action, but it’s still kind of smart and creative. In Soderbergh’s hands, this one is another success to add to his massive list of accomplishments. But there’s something to be said about a movie you can’t really enjoy or comprehend on a first viewing. It takes a second viewing for this one to get good, and that is definitely a bit of a problem. On that second viewing, however, the real artistic creativity and cleverness does indeed come out.