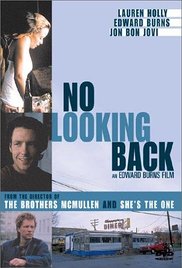 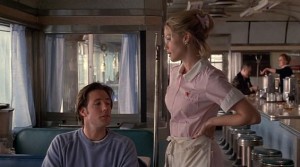 One Liner Review: a pretty ordinary story gets that edward burns touch from his golden years, making it fun to just spend time around these characters and listen to them talk.

If edward burns had golden years as a movie director, it would be the first couple of years of his career. It was the mid-nineties when he broke out as an overnight sensation with the brothers mcmullen and then kept going from there. he followed that movie with she’s the one, featuring jennifer aniston and cameron diaz. and after that he made this movie, no looking back. the three films are the highlights of his filmmaking career, and yet they’re not all that great. they all feel like movies we’ve seen before, only with dialogue and characters that keep them a little more interesting than the versions that we already know. The Brothers McMullan, certainly the best of the three, and ironically, it’s the one with the most unknown cast. After that, it’s a toss up between the other two, and both of them are eally just okay films at best.

No Looking Back is about a loner guy returning to the small town where he great up and later abandoned.  Charlie, the cool, mellow, laid back guy who refuses to take anything too seriously strolls in with a plan and starts reconnecting with the people who played a part in his former life. there’s his mom, his friends, and the girl he loved, impregnated, and then abandoned.

that girl is claudia, the other star of the film. she lives with her boyfriend, michael, (played by john bon jovi), and the two of them keep talking about marriage. only for some reason it’s not happening. michael wants to get married, or so he says, but he still hasn’t gotten her a ring. and if claudia had any doubts, when charlie gets back to town it certainly doesn’t make them any easier to resolve.

aside from the claudia, charlie, michael love triangle situation going on, there’s also a sort of subplot about claudia’s father and mother. her father walked out on the mother six months ago and the mother hasn’t been the same since. she lives in denial, insisting that the father is coming back one day (apparently he did this once before, and he did end up coming back), and she refuses to leave the house. everyone thinks the father is a scumbag, but claudia refuses to condemn him the way others (like her sister), do.

clearly the father situation is meant to parallel the charlie situation. charlie walked out of town on claudia right when she was having an abortion from his getting her pregnant. he says that he stayed to talk to the doctor and make sure the procedure went okay, but long enough to say goodbye to her or explain what he was doing. we’ve seen versions of this guy before. a guy who came to a place in his life where the only solution he saw was to just run away, and at the start of the movie, all of that is his backstory. gross pointe blank is a movie that immediately comes to mind, where hitman martin gross (john cusack) ran out of town, leaving his prom date (minnie driver) waiting at her doorstep, on the night of their highschool senior prom.

but no looking back is different. very different. it doesn’t play the situation for laughs the same way that movie did (cusack ran off to become a hitman), but instead goes for a serious and somber tone. the seaside town that these characters live in is depressing. and charlie, our main character, is absolutely a jerk.

yet somehow, part of us sympathizes with him. that’s in large part because we are willing to believe him that he made a mistake and is no longer the same person he once was. but he sure doesn’t have a problem with interfering and breaking up claudia’s new relationship. he pretends it’s not about being selfish, but about offering her options. if she’s unhappy and can offer he can offer her something better, then why shouldn’t she get that chance to decide? that’s his stance on the matter.

there are a lot of good ideas here. clearly that’s what burns saw in this script when he decided to make this movie. the parallel story lines between he and claudia’s father are interesting. so are the ways that charlie is presented to us as a man who truly rations with himself that he is doing the right thing. but then there are also some problems.

most notably, the john bon jovi character, michael. this guy is rightfully paranoid about charlie coming into town and trying to steal his girl, and he’s all over the situation from very early on in the film. but his actions are a whole different story. he is laid back when he should be fired up, and maybe it’s a cliche for the guy to go nuts and do something drastic when he is threatened with the possibility of his woman walking out on him (like when john travolta pulls a gun on his wife and sean penn in she’s so lovely), but at least it adds a little excitement to the film.

perhaps burns was going for realism here, more than anything else. in that case, maybe he’s got something, because uneventful as it is, the way michael reacts to things is probably right on the money for a tired guy who is content living in this small town and doing the same thing for the rest of his life. still, the movie needs energy and never really gets it. by the end, we realize who the main character of the film really is, and see some decisions come full circle, but it’s not enough. there are some cool things going on in this movie, but it could have used at least a little more pick me up and excitement.